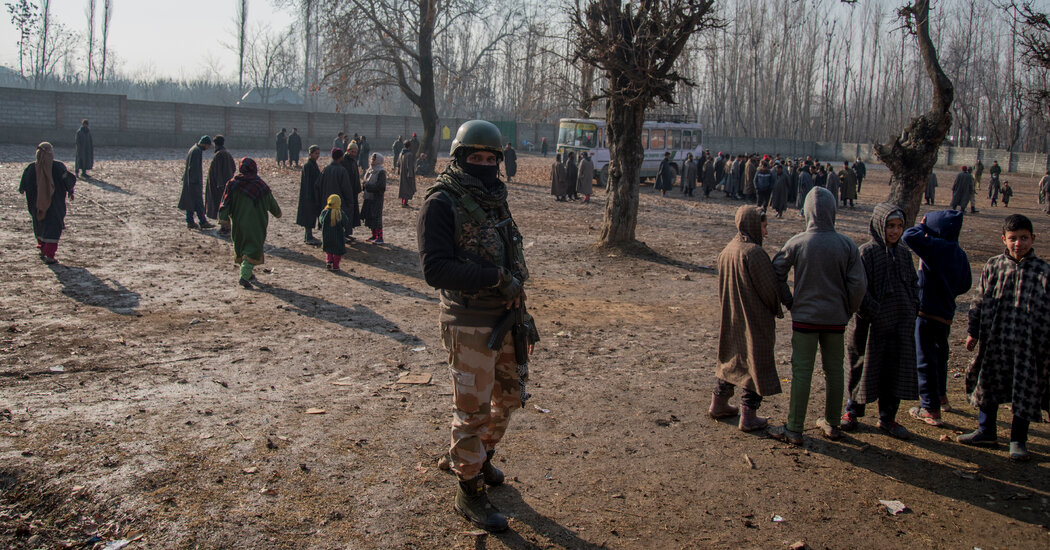 SRINAGAR, Kashmir — Votes were counted on Tuesday in the first local elections in Kashmir since the Indian government waged a harsh political and security crackdown in the restive region last year. Officials hailed a solid turnout as a sign that democracy has been restored, but little in Kashmir feels normal.

“The voting shows democracy being alive at the grass roots,” the region’s top civil servant, B.V.R. Subrahmanyam, told a group of reporters. “People taking value of their own lives is visible, palpable.”

The election — a vote to choose rural development officials — was called suddenly, giving parties only a week to register candidates before the first round of the eight-phase polling began in November, political leaders said. Many prominent Kashmiri politicians and public figures remain in detention with no recourse, or under threat. And hundreds of thousands of political workers for India’s Hindu-nationalist ruling party, the Bharatiya Janata Party, traveled through the region carrying banners and signs, hoping to make a strong showing in a mostly Muslim territory where it has traditionally been loathed.

The party, known as the B.J.P., did appear to make some inroads, winning at least three seats and leading in several dozen races in the 280-seat District Development Council. But some of the voter engagement appeared to stem more from defiance than satisfaction.

“We’d never want B.J.P. to be in power in Kashmir,” said Kulsoom Chopan, 21, who warmed her hands over a wicker fire pot while waiting to vote at a public boys’ high school in Bandipora, a northern district hemmed in by the Himalayas and Asia’s second-largest freshwater lake. “We would never vote for India.”

The New York Times was part of a small group of international media outlets permitted to visit Kashmir on a tightly controlled, government-organized trip to cover the polls.

This relatively small-stakes election was the first time India has allowed foreign reporters into Jammu and Kashmir since August 2019, when Prime Minister Narendra Modi’s government revoked the constitutional provision that gave the region some political autonomy. Jammu and Kashmir, which used to be India’s only Muslim-predominant state, is now a federal territory ruled directly by the Indian government.

Mr. Modi said at the time that Kashmir’s special status had helped fuel a 30-year-old armed separatist struggle that resulted in tens of thousands of deaths of security forces, rebels and civilians, and was an impediment to outside investors.

However, just as the security clampdown eased, the pandemic hit. Kashmir’s tourism-reliant economy and civil society are now on the verge of collapse: In a year and a half, there’s been no new private investment in Kashmir, and police officials say that recruitment by militant groups is on the rise.

Activists say hundreds of people, including separatists, political moderates, civil society advocates and journalists remain in jail after they were swept up last year. Accusations of torture by security forces were widespread.

In this climate of fear and uncertainty, the B.J.P. has made a big push into the Kashmir Valley, the center of the separatist struggle, unleashing 300,000 party workers and bringing Muslim politicians in Kashmir into its fold for the first time.

“We’re only in the takeoff stage,” said Ghulam Mohammad Mir, B.J.P.’s Kashmir spokesman and a candidate for the development council elections in the valley’s Kupwara district.

“We have thousands in election areas in every nook and corner of the valley, open, with flags,” he said.

Seven B.J.P. party workers have been killed in 2020, and a candidate affiliated with the party was shot and injured in November by militants, according to the Jammu and Kashmir police.

In the days before the Indian government unilaterally stripped Kashmir’s autonomy, Mr. Modi sent in thousands of army troops to quell anticipated unrest.

Prominent Kashmiri politicians, including former chief ministers of Kashmir, some of their relatives and other opposition party leaders, were arrested and detained in government houses for months. Cellphone and internet access were blocked.

A dozen petitions challenging the constitutionality of the move remain pending with India’s Supreme Court.

Among those detained were Mehbooba Mufti, the head of a powerful regional party, and Farooq and Omar Abdullah, the father and son who led another influential bloc. They have since been released, but when contacted by The Times, they said they were unable to grant interviews. On Saturday, it was announced that the Indian government was investigating Farooq Abdullah on money-laundering charges.

Despite the pressure, Waheed ur Rehman Para, a youth leader of Ms. Mufti’s party, trounced his B.J.P. competitor in the restive southern district of Pulwama from a jail cell in Jammu, where he is being held under accusation of being linked to militants. He and his family deny the accusation.

Mohamed Bhat ran as an independent candidate in Bandipora as part of the Gukpar Alliance, a coalition of opposition parties led by Farooq Abdullah promising to restore Kashmir’s autonomy.

“There was democracy in Kashmir previously, but with abrogation it was trampled upon,” Mr. Bhat said, speaking of the constitutional provision that was scrapped. “We have united to bring back the special status,” he said.

Hasnain Masoodi, a member of Indian Parliament from Mr. Abdullah’s party, complained about the haste with which the central government unilaterally decided to hold the development council elections.

“We were not given a level playing field,” he said. “There was no campaign at all. Most of the time we were either denied permission or senior leaders were confined.”

Mr. Masoodi, who earlier served as chief justice of Jammu and Kashmir before joining Mr. Abdullah’s party, said the coalition partners weren’t able to vet candidates, but fielded them anyway to avoid leaving the field open for the B.J.P.

“They made it into a referendum” on the change to Kashmir’s political status, he said of the B.J.P.

Dilbag Singh, the top Indian police officer in the region, denied that opposition parties were refused permission for campaign events. He also denied accusations that police had tortured people.

Mr. Singh said that of the hundreds of people detained in August 2019, only 155 remained in custody in Kashmir and other jails around India.

“Today we have shown restraint. Not a single bullet has been fired, no civilian has been killed,” Mr. Singh said. “That’s a fact — let them prove it otherwise.”