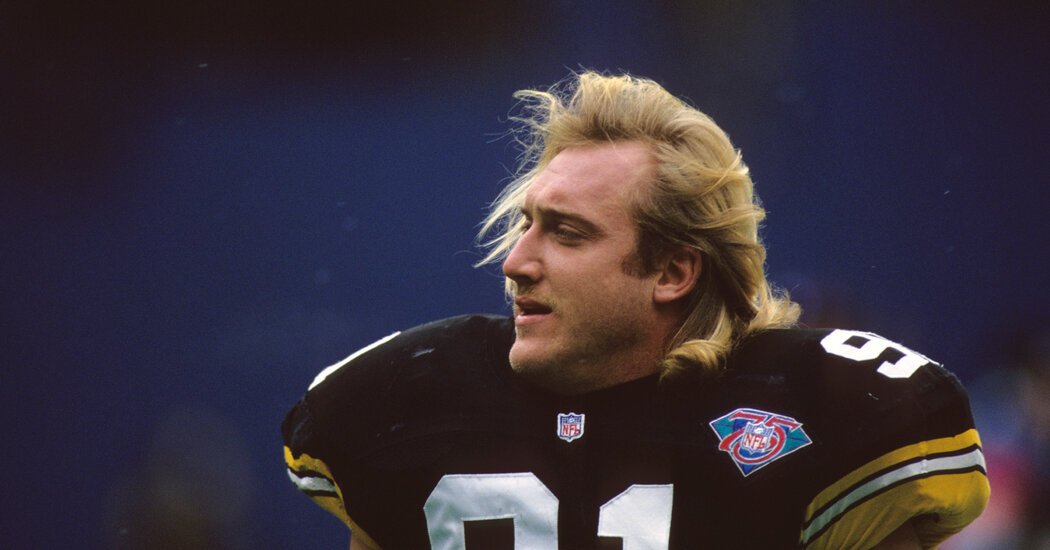 Kevin Greene, a relentless linebacker who attacked quarterbacks like prey on his way to recording the third-most sacks in National Football League history, died on Monday at his home in Destin, Fla. He was 58.

The Pro Football Hall of Fame announced his death but did not provide a cause.

Over 15 seasons with the Los Angeles Rams, Pittsburgh Steelers, Carolina Panthers and San Francisco 49ers, Greene used his speed and strength, mostly from the outside linebacker position, to hunt quarterbacks. His 160 regular-season sacks rank third behind the totals of the defensive ends Bruce Smith (200) and Reggie White (198).

“I believed in my heart that I was unblockable,” Greene said in 2016 during his Pro Football Hall of Fame enshrinement in Canton, Ohio.

Greene was a brash and charismatic performer on the field, possessed of long blond hair that flowed from beneath his helmet and seemingly inexhaustible energy.

“He was an awesome force on the field and as a person,” Bill Cowher, the former Steelers coach, said in an interview. “When you coached him, he gave you everything he had. He was a man of tremendous energy, passion and respect.”

Greene said that sacking a quarterback brought him relief.

“My teammates depended on me to do that,” he said in an undated interview on Steelers.com. “I contributed. I didn’t want to let my teammates down. I did something to stop that drive. Either I hit the quarterback at the right time and caused a fumble we recovered, or we got an interception.”

He added: “A sack was different than making a tackle for a loss, or a tackle at the line of scrimmage. It was just me making a contribution and not letting my brothers down.”

Kevin Darwin Greene was born on July 31, 1962, in Schenectady, N.Y., to Patricia and Therman Greene. His father served in the Army for 30 years and retired as a colonel.

When he lived on the Army base in Mannheim, West Germany, where his father was stationed, “football began to burn inside of me,” he said in his Hall of Fame speech. He played against other military youngsters — “the best that the athletic youth association had to offer.”

His family returned to the United States in time for him to attend high school in Granite City, Ill., where he played football and basketball and was a high jumper on the track team.

He entered Auburn University in 1980, but failed to make the football team as a punter. He played intramural football before joining the varsity in 1984 as a walk-on, playing defensive end.

“He had the physical tools and ability, and he came with a vengeance,” the longtime Auburn coach Pat Dye said in a 2016 NFL Films documentary about Greene. “But the thing that set him apart is what he had inside of him. He played the game with every molecule in his body.”

Greene was drafted by the Rams in the fifth round of the 1985 N.F.L. draft. He played defensive end at first before moving to outside linebacker, where he thrived in the 3-4 defensive scheme — three linemen and four linebackers — which suited him best. But he left for Pittsburgh as a free agent in 1993 after the Rams shifted to a 4-3 defense.

“If you were going to play against Kevin, it was going to be a full day’s work,” Dom Capers, who coached Greene in a 3-4 formation as the defensive coordinator of the Steelers and the head coach of the Panthers said in an interview. “He’d get sacks late in a down by outworking the other guy. He had that extra something, that ‘it,’ you were looking for.”

Late in his football career, Greene wrestled occasionally for the World Championship Wrestling circuit, most notably teaming with Roddy Piper and Ric Flair to win a match at the Slamboree in 1997.

After retiring from football in 1999, he pursued some business ventures and N.F.L. coaching internships. In 2009, when Capers was the defensive coordinator of the Green Bay Packers, he brought Greene along as his outside linebackers coach.

“There’s no better guy to teach young guys,” Capers said, “and Clay Matthews made the Pro Bowl four out of the five years Kevin coached him. Kevin lit a fire under Clay.”

Greene left the Packers in 2013 to coach his son, Gavin, in high school football. In 2017 and 2018, he coached the Jets’ outside linebackers.

In addition to his son, Greene’s survivors include his wife, Tara, and his daughter, Gabrielle.

While coaching the Packers’ outside linebackers, Greene reflected on the differences between sacking quarterbacks and teaching others to pursue them.

“It’s hard to replace sacking Joe Montana and the next week going to Denver and knocking around John Elway and Dan Marino the following week,” he was quoted as saying in Madison.com, the website of the Wisconsin State Journal. As a player, he said, “you’re in the flame and you get burned and you feel that.” As a coach, “you’re standing next to the fire and you feel its warmth. It feels good.”