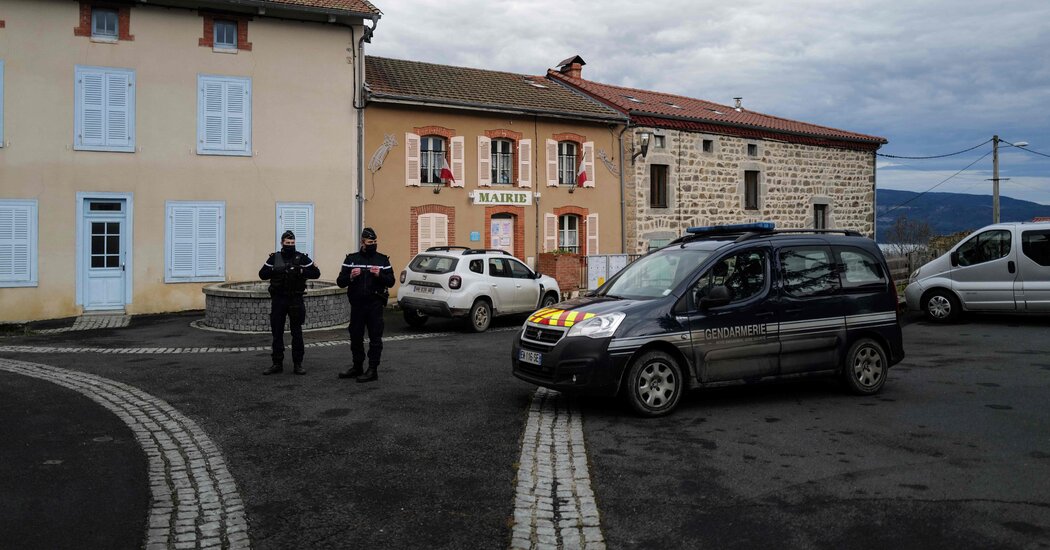 PARIS — A gunman killed three police officers who were responding early Wednesday to reports of a domestic violence episode in central France, the authorities said, a rare outburst of deadly violence against French security forces. The gunman was later found dead.

The officers had been called to the scene in an isolated hamlet near St.-Just, a small village in the Puy-de-Dôme region of France, about 50 miles southeast of Clermont-Ferrand, to help a woman who had sought refuge on the roof after being beaten by her partner, according to the French Interior Ministry.

The deaths of the officers and the plight of the woman, whose physical condition was not publicly known, received widespread attention in France, where concern has been growing in recent years over the scourge of domestic violence.

The attack prompted swift condemnation. “To protect us, our forces risk their lives,” President Emmanuel Macron said of the officers on Twitter. “They are our heroes.”

The officers were members of France’s gendarmerie — the force that oversees smaller towns, and rural and suburban areas. Gérald Darmanin, the French interior minister, said that the officers died in “particularly despicable circumstances” after a “courageous and heroic” intervention to help the woman and her child.

“We owe them respect and gratitude,” Mr. Darmanin said, speaking to reporters in Ambert, a town near St.-Just, and adding that the episode was one of the deadliest in the gendarmerie’s history.

Police reinforcements quickly cordoned off the area. The gunman, who has not been identified, was found dead several hours later, Mr. Darmanin said, although the exact circumstances of his death were unclear.

François Chautard, the mayor of St.-Just, a village with roughly 150 residents, told the BFM TV news channel that the officers were shot after arriving at the scene of a domestic dispute, and that the gunman then set the house on fire.

French police officers have been repeatedly targeted by Islamist terrorist attacks in recent years, but deadly gun violence against police officers is otherwise rare in France.

Twenty-five French police officers and gendarmes were killed in the line of duty in 2018, up from 15 in 2017, according to official statistics. Thirteen of those deaths in 2018 were directly related to security operations. There have been 11 such deaths so far in 2020, including the officers killed on Wednesday, the interior minister said.

Marlène Schiappa, France’s junior minister for citizenship, told BFM TV that the shooting was proof that perpetrators of domestic violence were a danger to society.

“These are people who think they own their wife or partner,” Ms. Schiappa said, adding that such people “will use any means to maintain that possession,” including violence.

Mr. Macron has made tackling domestic abuse one of his government’s priorities, and awareness about violence against women has surged in recent years. In 2019, nearly 150 women in France were killed by their partner or former partner, a 21 percent increase from the previous year, according to official statistics.

The French Parliament recently approved a law that eased medical confidentiality restrictions in cases where there is an “immediate danger” of violence, enabling practitioners to flag cases to the legal authorities without a patient’s consent.

The law also increased prison terms for people convicted of harassing their partner and criminalized the geolocation of one’s partner without consent.