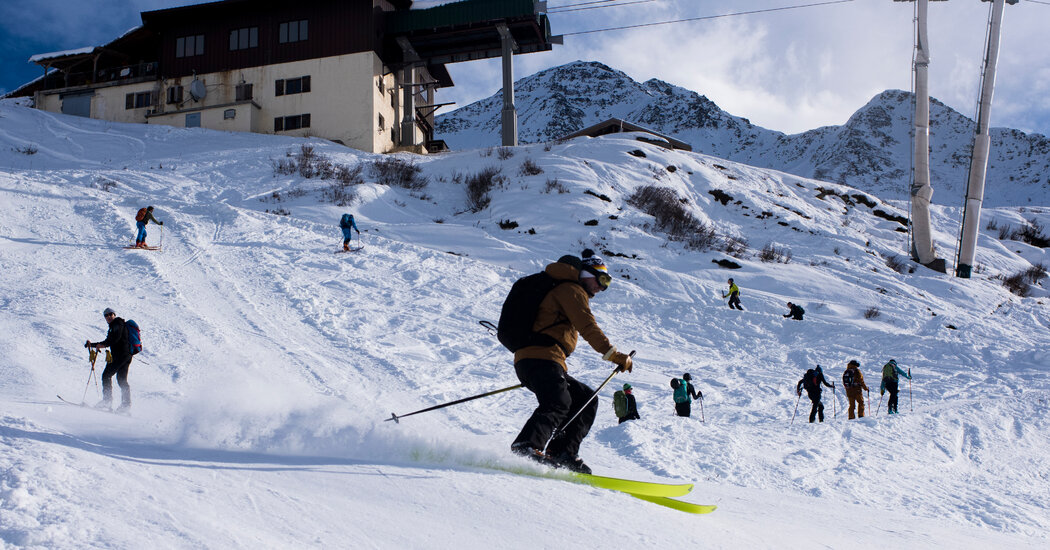 CHAMONIX, France — Last Saturday morning, dozens of skiers dotted the slopes above the Alpine hamlet of Le Tour. The cloud-snarled peak of Mont Blanc loomed above the Chamonix valley. The snow conditions were mediocre. The sky was blue. There was only one thing that made the early-season scene atypical: All of the visitors, every last one of them, were skiing up the mountain, not just down.

France’s prime minister, Jean Castex, announced in late November that the government was easing the country’s second national lockdown. Travel, for example, would be permitted in time for the winter holidays, he said, and he encouraged citizens to visit the country’s famed ski resorts “to enjoy the pure air of our beautiful mountains” and visit the shops.

There was one major caveat, though. All ski lifts, he said, would be closed to the public.

The rule has roots in a hard, painful lesson. The French authorities are eager to avoid repeating the onset of the pandemic, when the Alps became a potent breeding ground for the virus. Outbreaks around the world were later traced to places like the Austrian resort town of Ischgl, and France’s first cluster appeared in nearby Les Contamines-Montjoie.

“When you go out skiing in the cold, the first thing that happens is your nose starts to run,” said Miles Bright, an English mountain guide based in Chamonix. “And what do you do? You wipe your nose. So your gloves are covered in snot, you join in the lift queue, you touch things.”

“I just can’t see how it can be hygienic, getting in and out of the ski lifts,” he added. “But for the nation’s health, I think it’s absolutely essential.”

Bright, like the rest of skiers on the mountain, was ski touring — ascending the mountain using skins attached to his skis, then detaching them to descend normally. He estimated it would take him four times as long to go up than to ski down.

It’s not for everybody. “When you say the ski lifts are shut, it’s a way of saying there’s no more freedom, no more joy,” said Jasmin Taylor, a British World Cup skier who trains each winter in the Chamonix Valley. As a result of the closure, Taylor, 27, like many other skiers, said that she has been scheduling more time in Switzerland, where ski lifts remain open.

The French authorities have warned tourists who circumvent restrictions to ski outside the country that they could be forced to quarantine upon returning to France, but even without that cross-border competition, places like Chamonix are reporting a steep drop in visitors. Bright said the financial consequences already had produced “a local economic disaster.” Bookings for accommodations in Chamonix were under 30 percent of capacity for the two weeks around Christmas this year; last year, capacity figures approached 80 percent. Several large hotels remain closed.

In the lee of a shuttered restaurant last weekend, just above the spot where people typically disembark from the Charamillon Gondola, a couple from France’s Alsace region was taking a break from their ascent to have a picnic of sausage, cheese and cakes.

Asked if he had considered changing his plans to make the 300-kilometer drive (about 186 miles) from Mulhouse when he heard the lifts would be closed, one half of the couple, Daniel Kippelen, replied, “No, on the contrary.”

The same rules that had kept others away were actually an attraction, he said. “We knew that Christmas would be closed, so we knew there would be a lot fewer people, we knew that it would be peaceful.”

Eight hundred vertical meters below, in Chamonix, the family-owned Bighorn Bistro & Bakery would typically be packed with people. “You wouldn’t be able to move,” said Hannah Weisser, one of the owners. While bars are still not able to operate, restaurants like Bighorn are permitted to serve to-go food and drinks. With indoor dining prohibited, the owners are using the lockdown to refurbish tables and repaint the walls.

While the nearby lifts are closed to the public, elite athletes and members of club teams are still turning up. Samuel Gex, 15, arrived last Sunday at the Planards chairlift at 2 p.m. sharp. As a member of the Chamonix Club Ski team, he had the right — because of his training — to do something few in France can so far this winter: ride the ski lift. He knows how fortunate he is.

“I know friends who live farther away in other valleys,” he said, adding: “It’s very complicated. They don’t have slopes like this near them. They must drive one, two hours to have a little slope like this one.”

As Christmas passes, much of Chamonix now is awaiting Jan. 7: That is the first day the government has said the lifts may reopen, if the situation permits. But for those who don’t derive their income from the tourism industry, the closure of the lifts — and the resulting lack of crowds — has been a positive. Seth Thomas Pietras, a 40-year-old corporate affairs director who lives in Chamonix, said that he has been taking advantage of the window to do some ski touring of his own.

“I think people, particularly those in Chamonix, celebrate the mountains in every capacity,” Pietras said. “Lifts help us, but they don’t limit us.”