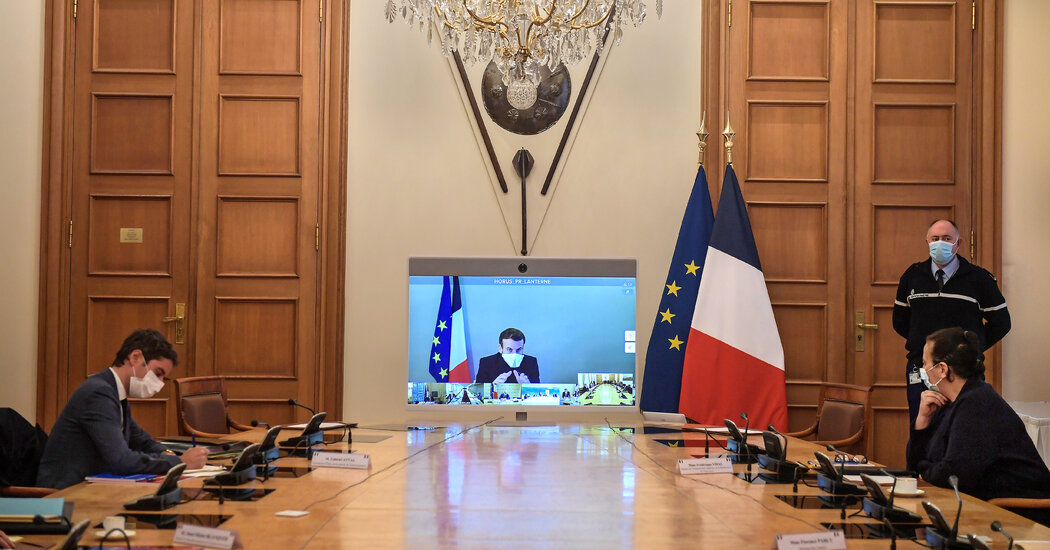 PARIS — A week after he first tested positive for the coronavirus, President Emmanuel Macron of France has stopped isolating himself because he no longer shows symptoms, a statement from the Élysée Palace, his official office, said on Thursday.

Throughout his quarantine, Mr. Macron — who had typical symptoms of Covid-19, such as fatigue, coughing and aches — “was able to remain mobilized on the main current affairs of our country and to hold meetings and councils as planned,” the statement read.

Mr. Macron contracted the virus at a time when a rebound in infections across France dashed hopes that people would be able to safely celebrate end-of-year festivities.

French health protocols recommend seven days of isolation period following the appearance of symptoms or a positive virus test, but a negative test is not required to leave isolation once that period is over.

The French president was not the first world leader who contracted the virus. But unlike several other prominent leaders who have had it — including President Trump, President Jair Bolsonaro of Brazil, and Prime Minister Boris Johnson of Britain — Mr. Macron has consistently emphasized the threat posed by the virus.

Although it is still unclear how Mr. Macron became infected, the announcement last week that he had caught the illness prompted a cascade of leaders who had met him in the previous days to isolate themselves, including Prime Minister Pedro Sánchez of Spain; Prime Minister António Costa of Portugal; and the European Council president, Charles Michel.

Olivier Véran, the French health minister, has said that Mr. Macron might have been infected at European Council meetings on Dec. 10 and 11. Prime Minister Igor Matovic of Slovakia, who attended the same gatherings, has also tested positive for the virus.

Mr. Macron, who celebrated his 43rd birthday in isolation on Dec. 21, used his quarantine period to reiterate warnings about the risks of contamination.

In the statement on Thursday announcing his improvement, he urged members of the French public to limit their contacts and to remain vigilant during the Christmas holidays by “ventilating rooms, wearing a mask, regularly washing hands.”

For the past week, daily updates on Mr. Macron’s health condition were released to the public by Mr. Macron himself, by his personal doctor or through official statements from the Élysée Palace — a departure from France’s tradition of secrecy around the health of its presidents.

In a self-shot video from his presidential retreat near Versailles last week, a tired-looking Mr. Macron said he was suffering from a cough, headaches and fatigue. His office reported the first signs of improvement on Wednesday, after having described his health condition as “stable” in previous days.

Mr. Macron held several virtual meetings with his ministers and continued exchanges with foreign leaders, such as with President Vladimir V. Putin of Russia on Tuesday.

In an interview with the French magazine L’Express on Dec. 17, the day he tested positive, and published on Tuesday, Mr. Macron said he wanted to rely on “patriotic and European” French people to “reconcile” a country undermined by “divisions” that persist three and a half years into his presidential term.

With more than 60,000 deaths caused by the coronavirus and about 2.5 million coronavirus infections reported, France has paid a heavy toll in the pandemic. While new infections had dropped below 10,000 per day by the end of November, they have recently rebounded to an average of 14,000 daily new cases over the past seven days, dashing hopes that the second wave was over.

On Thursday, the French National Authority for Health approved the Pfizer-BioNTech vaccine, officially enabling the inoculation rollout to start, after it received backing from the European Union earlier in the week.

The vaccination campaign in France will begin on Sunday in several retirement homes and hospital nursing units. The French authorities have ordered about 200 million doses and have outlined a three-phase vaccination strategy, starting with seniors and at-risk nursing home workers.