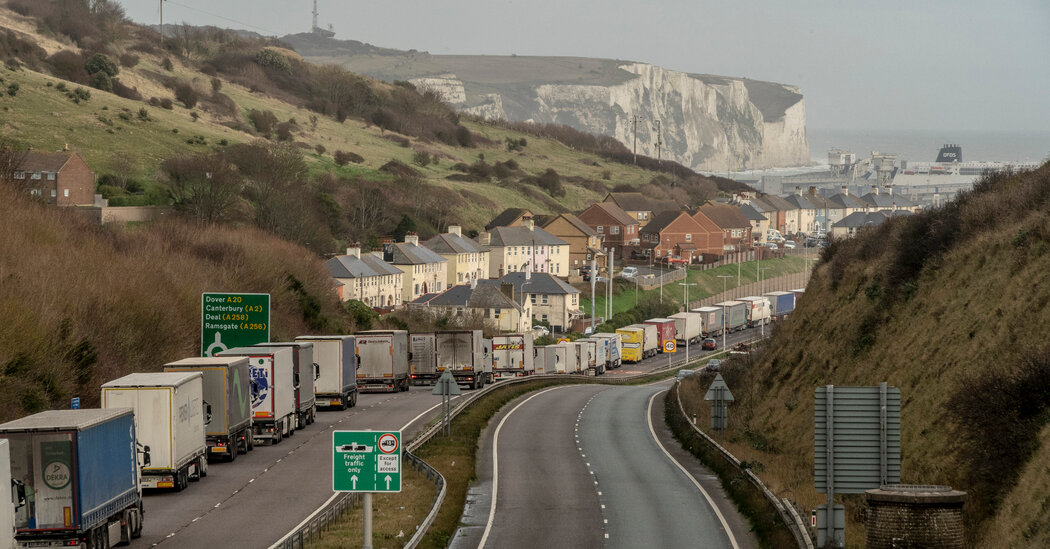 British lawmakers had haggled for years over the divorce, known as Brexit. Britain formally left the European Union on Jan. 31, closing the book on nearly half a century of close ties with Europe, but it continued to follow the bloc’s rules during a transition period intended to give the two sides time to negotiate the trade deal struck this week.

It saves Britain from crashing out of the E.U.

British companies have long been able to move goods to and from the European Union without paying taxes or tariffs. Had the two sides failed to reach a deal before the Dec. 31 deadline, tariffs would have been imposed, raising the price on cars considerably and making it much more difficult for British farmers to sell meat, for example, to the European market.

A no-deal separation also looked likely to create gridlock at British ports and strand trucks on either side of the border.

The new agreement means that Britain avoids onerous tariffs or quotas on goods. But problems at the border could still emerge, with checks increasing and traders having to complete new customs declarations.

And commercial relations face more restrictions. The Office for Budget Responsibility has estimated that gross domestic product in Britain could be 4 percent lower cumulatively over the next 15 years than it would have been had Britain remained in the European Union. Without a deal, that drop was projected to be even larger.

The agreement was not entirely a surprise. To some commentators, a no-deal Brexit had always looked more like useful leverage for political purposes than a probable outcome of negotiations.

Both sides compromised on fish, a major sticking point.

The number of people employed in Britain’s fishing industry has fallen in recent decades, and the British government cast its split from the European Union as a chance to revive the industry by cutting European companies’ access to British waters. Britain originally sought an 80 percent reduction in the share of fish that European Union boats would be allowed to catch in British waters.

Prime Minister Boris Johnson of Britain made significant concessions on that point: The European Union’s fishing quota in British waters will be cut by 25 percent. But Brussels also compromised: That quota reduction will come into effect over five and a half years, roughly half as long as the European Union originally wanted.

British workers, unhappy not to have exclusive access to fish in British waters, may complain about the deal. But analysts have said that British boats would not have the capacity to catch everything that once went to European boats, even if they had the opportunity to do so.

A no-deal scenario would also have forced tariffs on British fishing companies, making it more difficult for them to sell what they caught to the European Union at competitive prices.

Pro-Brexit lawmakers got many of their wishes.

Citizens of European Union member states can look for jobs elsewhere in the bloc, work there without needing special permits and stay after they have left their jobs. But the trade deal ends the free movement of people between Britain and the continent. And it also ended Britain’s involvement in the popular Erasmus student exchange program, which since 1987 saw hundreds of thousands of people each year traveling abroad for study, work experience and apprenticeships.

As both a single market and a customs union, the European Union also agreed to adopt the same rules and regulations so that goods, services and capital can move freely across borders of countries within the bloc. And it agreed to apply the same taxes on goods from outside the bloc, meaning that they can be shipped within the European Union without facing additional tariffs.

But Britain will now leave both the single market and the customs union and can pursue trade deals with other countries. Those points were among the demands made by the most aggressive anti-Europe lawmakers in Britain.

But the European Union won assurances, too.

In return for allowing British companies to avoid tariffs, the European Union wanted to ensure that those companies would not gain unfair advantages over their European rivals. The bloc’s leaders worried that Britain would give its own companies a leg up through additional state aid, or by lowering environmental or labor standards.

Britain did not want the European Union to be able to automatically impose sanctions if it decided to depart from European rules. So the two sides worked to devise a mechanism by which either could raise a complaint if it had evidence that one had changed regulations in a way that put the other’s businesses at a disadvantage.

As a last resort, if Britain and the European Union could not find common ground in such a scenario, tariffs could be imposed to ensure that one side did not have too big of an advantage.

The trade deal was primarily concerned with goods crossing borders. But the British economy is enormously reliant on its services sector, and the deal did not immediately make it easier for British companies to sell financial and other services to its European neighbors.

Once the transition period ends on Dec. 31, traders in London will leave the European Union’s single market for financial services.

Both have said they each wanted to be able to evaluate in the future whether the other side’s financial services regulations were equally stringent, and whether they could continue to easily buy and sell services across borders.

But that system will not be as straightforward for banks and traders as the current one.