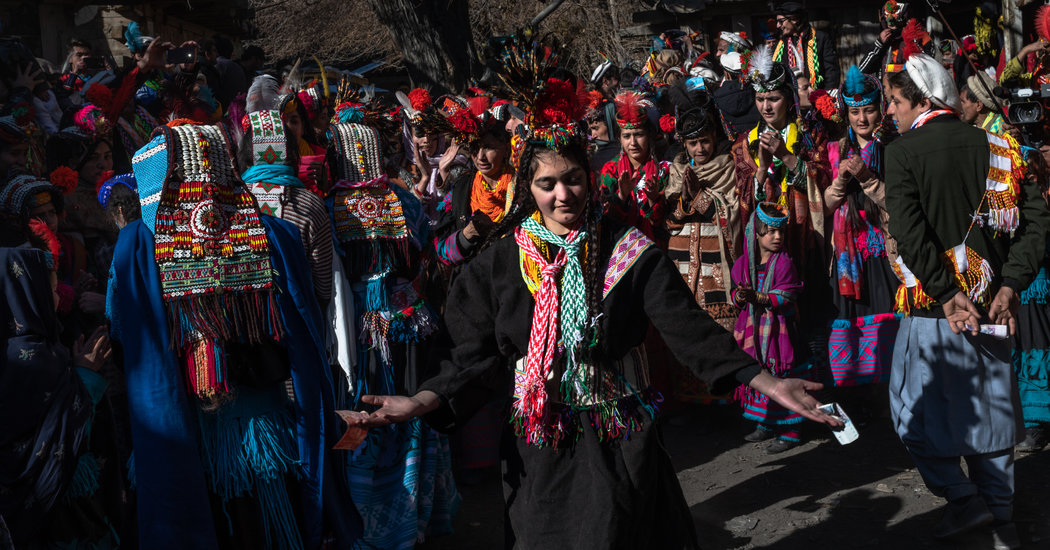 RUMBUR, Pakistan — In a remote valley in northern Pakistan, hemmed in by sheer rock walls and high pastures, members of a tiny community gathered.

The Kalash are a group of about 4,000 people who live in the mountains of the Hindu Kush, where they practice an ancient polytheistic faith. Each year, they come together for Chawmos, a New Year festival that coincides with the winter solstice and is marked by dance, animal sacrifice and highly prescribed roles for men and women.

The two-week festival is a portrait in contrasts: snow and fire, solemn ritual andfrenzied activity, gender segregation and public flirtation, community and isolation.

While the coronavirus has forced the world to adopt social distancing, the Kalash have practiced being a community in isolation for millenniums.

The Kalash, whose wooden houses cling to the craggy hillsides of three valleys in Pakistan’s often unruly northwest, are the country’s smallest minority group. The overwhelming majority of Pakistan’s more than 200 million people practice Islam.

Despite the seclusion of the Kalash, the outside world has crept closer, bringing changes to their way of life.

Their faith is often compared to an ancient form of Hinduism, but the origins of the Kalash are a mystery. Some believe they are descended from the forces of Alexander the Great; other anthropologists contend they are migrants from nearby Afghanistan.

Their religion incorporates animistic traditions of worshiping nature as well as a pantheon of gods, whose members in some instances bear resemblances to the Vedic gods of ancient India. Chief among the Kalash gods is Balumain, the lord of heaven, to whom the festival is dedicated.

For the Kalash, cleanliness and holiness are inextricably linked. Areas of the villages and valleys where they live are designated “pure,” and access to them is sometimes restricted by gender or may first require a ritual bath. The Kalash believe places and people are most likely to be visited by Balumain only after they have been cleaned and sanctified.

During the year, Kalash women must bathe and wash their clothes and dishes away from their homes. During their periods and when they give birth, they stay in menstruation huts. These are community spaces that are the exclusive domain of women, unlike the huts found elsewhere in the region, including in Nepal, where women are left alone and die from exposure and other causes every year.

As the Chawmos festival begins each December, the women take part in a purification ritual. Held in a temple, known as a jestekan, or in an open space away from their homes, women and girls hold bread that has been baked for them by male family members.

A male relative then showers them with water, and waves burning juniper branches over their heads. Only then can women pass freely between the valley’s villages and homes to take part in the festivities.

In the lead up to the holiday, the men grind flour at a communal mill and bake their loaves at home or in the jestekan. The women gather at a bath house, where they wash their vibrant-colored dresses and wrap their hair in long braids.

In order to stay and witness the festival unfold last year, I joined the women of a family with whom I was staying in their purification ritual. I watched as, one by one, they stepped forward to be encircled by a trail of flame.

At the start of Chawmos, the crisp winter air is filled with the scent of fresh baked bread and burning juniper, and neighbors greet one another with baskets of fruits and nuts.

What follows is 14 days of song, dance and ceremony. A group of women, often from the same family or clan, will form a circle and begin singing and dancing, their arms intertwined and their eyes half-closed in prayer. As the women sing, other women and men join the ring and the circle grows larger and louder.

When moved, a young woman will break from the group and dance in the middle of the circle. Sometimes, a woman or a man from her family will join her. But often, a young man will enter the ring to dance with her. Their dance is different: The couple face one another, their eyes locked. They are courting.

In the first days of the celebration, young people often find a spouse; the women often make the first move.

“The girl goes to the boy’s family maybe for a few weeks or a month and then when she comes back home they will get married,” said Bibi Jan, a woman of about 80. “No one else decides, it is up to them what they choose.”

The dancing, as well as the flirting, is fueled by locally brewed mulberry wine. The role of women and the consumption of wine in the community contrast with the mores of their Muslim neighbors, who sometimes attend the festivals as tourists.

“The way they worship and the way men and women marry — and just interact generally — is very different from surrounding communities,” said Wynne Maggi, an anthropologist who has studied the Kalash.

The festival, the most important of the year, is also a time for the Kalash’s local leadership to deliberate over the serious challenges facing the culture.

The Kalash find themselves increasingly squeezed by outsiders buying up land and moving in. And for many years, the Kalash have been wary about the threat from Islamist militants who see their faith as sacrilege.

They face environmental threats, as well. The trees that protected the valleys from floods caused by rain and glacial melt are being removed, sometimes illegally, at an alarming rate. The dearth of trees and changes to weather patterns resulting from global warming has resulted in recent years in devastating flash floods that destroy homes, bridges and crops.

Younger members are leaving the area for greater educational and employment opportunities. Government schools all teach about Islam, and each year some young Kalash decide to convert, locals say. A new road has made access to the area easier, and tourists are increasingly visiting the Kalash valleys, where most people exist largely on a mixture of subsistence farming and livestock husbandry.

Saifullah, a Kalash leader, who goes by only one name, said his biggest concern was outsiders buying land to build hotels in an effort to court tourists.

The hotels are often on or near land considered sacred to the Kalash, and the Muslim-owned accommodations are seen as depriving the community of tourist dollars, which has led to resentments.

“The Kalash will never finish,” said Mr. Saifullah, 61. “But of course the population is going down if they can’t get enough land to stay here.”

Aslam Baig, 29, who returned to the valley from Lahore, where he works, said many young people have left to find work.

“It’s very hard because we don’t have internet, we don’t have newspapers, and then you have to go to cities to find out about the jobs,” he said.

But during the Chawmos celebrations, many of these problems are momentarily forgotten.

The festival culminates with a late-night torch procession through the tiny villages in the Kalash valleys; flickering lights weave down through forests, heralding the start of a final evening of dancing. The hillsides echo with song.

The Kalash dance around a bonfire, linking arms and chanting prayers for the year ahead.