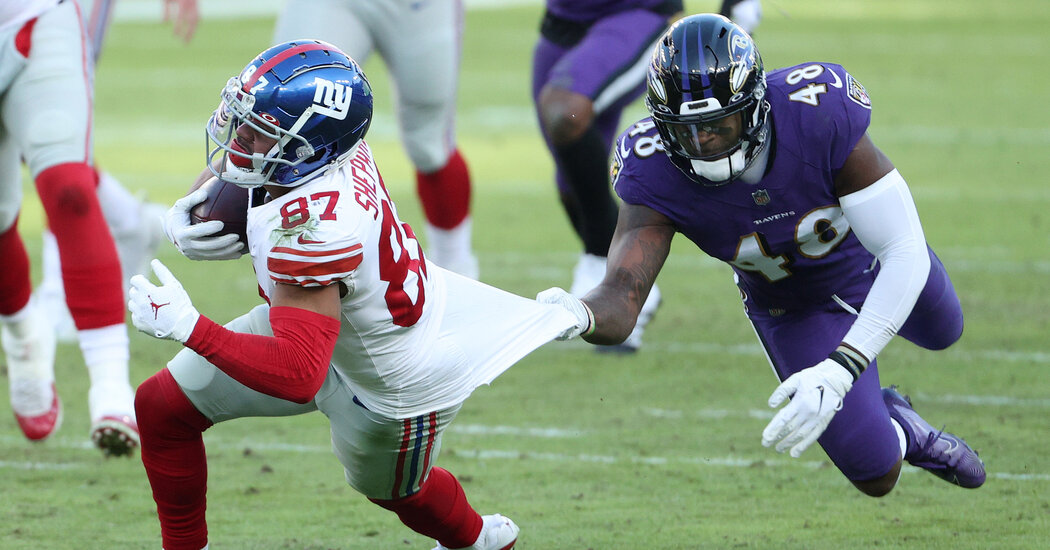 In early November, the Giants began a startling run at a playoff berth with four consecutive victories. In that moment, perhaps it seemed as if the long-suffering Giants had been underestimated under Joe Judge, the team’s rookie head coach.

At roughly the same time, the Baltimore Ravens, a Super Bowl favorite when last season’s playoffs began, were surprisingly adrift with four losses in five games. Had the Ravens and their sparkling quarterback Lamar Jackson, the N.F.L.’s reigning most valuable player, been overvalued?

By the end of the Ravens’ systematic 27-13 thrashing of the Giants on Sunday in Baltimore — a game that was not nearly as close as the score would suggest — it was obvious the Ravens and Jackson had simply been forced to endure a mini-slump inexorably linked to last month’s coronavirus outbreak on the team.

As for the Giants, it is now fair to wonder whether the win streak of several weeks ago was true progress for a beleaguered franchise or a hollow mirage that leaves many questions about the roster still unresolved.

The fourth successive victory for the Ravens (10-5) greatly enhances their chances at claiming a wild-card playoff spot since they now only need to win their final regular season game against Cincinnati (4-10-1) to qualify for the postseason. The Giants (5-10), losers of three straight games, are left clinging to meager hopes for their first playoff appearance since the 2016 season. They could also finish last in the N.F.C. East, which is by far the league’s worst division.

“I’m really proud of our guys for handling the situation we’ve been in for the last several weeks,” Baltimore Coach John Harbaugh said. “They’ve managed to stay focused and that says everything about their character.”

Added Ravens tight end Mark Andrews when asked to address the team’s losing stretch and a period when at least one Baltimore player tested positive for the virus for 10 successive days: “It was about staying patient. I knew our time was coming and it is coming.”

It is much harder to see improvement for the Giants — in the near term, at least. The team will have at least 10 losses for the fourth season in a row, which is a first for the franchise. The Giants will also have double-digit losses in six of seven years. In their last three games, the Giants have been outscored, 73-26.

Judge, however, remained unbowed when assessing the season as a whole.

“I feel like we’re on the right track,” he said Sunday, referring to the development of less tangible attributes like the team’s heightened work ethic and sustained resilience.

“We’ve got the right start, we just need to do more on the field to get the tangible results,” Judge said.

The tone for the game, generally utter dominance by Baltimore, was set early when the Ravens took the opening kickoff and used eight minutes and 12 seconds to meticulously march 82 yards downfield on their way to taking a 7-0 lead. The 13-play drive put on display everything the varied Baltimore offense planned to unleash against a Giants defense that had been much improved in the second half of the season.

Jackson, who completed 17 of 26 passes for 183 yards with two touchdown passes, threw for 31 yards on his team’s first possession, including a 6-yard touchdown toss to Marquise Brown. Jackson, who would rush for 80 yards on 13 carries, also repeatedly sliced through the heart and strength of the Giants’ defense, which has been the team’s interior linemen.

Running back Gus Edwards led the Ravens Sunday with 85 yards rushing on 15 attempts and had two receptions for 37 yards. Edwards, who has rushed for 277 yards in his last four games after gaining 386 yards in Baltimore’s opening 10 games, was especially effective in third-down situations.

“He’s doing it all right now,” Jackson said of Edwards. “He’s running tough and getting yards after the catch. But I see it all the time in practice, that’s Gus just being him.”

As Baltimore built a 20-3 halftime lead with a 2-yard touchdown run by J.K. Dobbins and two Justin Tucker field goals, the Giants were nearly setting team records for offensive futility. They had just three offensive plays in the first quarter, which is the fewest for the team in 30 years. They had possession of the football for only seven minutes and 22 seconds of the first half when they gained just 16 yards on the ground — compared to the 155 first-half rushing yards for Baltimore.

Giants quarterback Daniel Jones, who missed a game because of a hamstring injury earlier this month and appeared rusty in a lopsided defeat to Arizona last week, seemed to be moving more comfortably Sunda. But the results were no better.

Jones, who has 406 yards rushing this season, ran just once Sunday for 3 yards. Most problematic for Jones was the Ravens’ pass rush, which overwhelmed the young, inexperienced Giants offensive line for six sacks, all of them in the second half when the Giants showed some life offensively but never truly challenged Baltimore’s lead.

Jones completed 24 of 41 passes for 252 yards. Midway through the fourth quarter, he threw a 3-yard touchdown pass to Sterling Shepard. It was just Jones’s ninth touchdown pass in 13 games this year. The Giants, who came into Sunday’s game with an offense that was ranked second-to-last in the N.F.L., have now scored 26 points in their last three games.