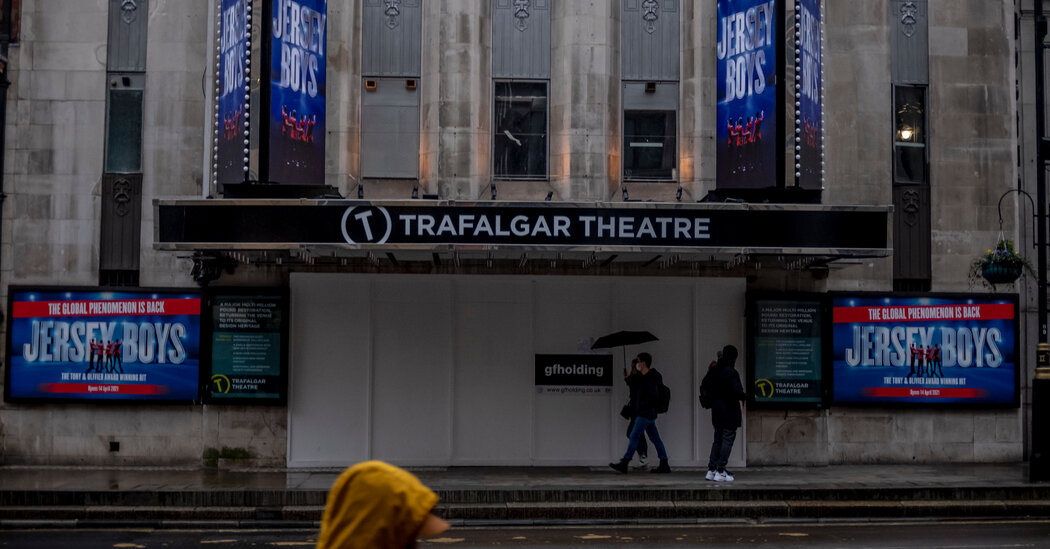 LONDON — About half of England is under the nation’s strictest lockdown measures, and people have been ordered to stay at home, but the coronavirus is still spreading at an alarming rate. Hospitals are treating more patients than at any time during the pandemic, the number of new infections has set a daily record, and there is a growing debate about allowing tens of thousands of students to return to classrooms after the holiday break.

The nation’s scientists have said that an apparently more contagious variant of the virus is driving the rise in cases and, with severe restrictions already imposed on more than 48 million people, it remains unclear what other tools the government has at its disposal to get the outbreak under control.

There were 53,135 new lab-confirmed cases reported on Tuesday, the highest figure yet on a single day. The National Health Service said there were now over 20,000 people in English hospitals, more than at the peak of the pandemic in April.

With the government scheduled to meet to evaluate its restrictions on Wednesday, Prime Minister Boris Johnson is under pressure to impose another national lockdown and move students — especially older ones in colleges and secondary schools, who may be more easily infected by the new virus variant — to remote learning.

Some hope to see the daily caseload drop as the restrictions imposed on London and southern and eastern England around Christmas begin to have an effect.

But a potent combination of a new strain of the virus, an imminent return to schools and a measure that allowed people in lower-risk areas to meet indoors on Christmas Day has raised fears that worse could come in the new year.

“We are entering a very dangerous new phase of the pandemic, and we’re going to need decisive early national action to prevent a catastrophe in January and February,” Andrew Hayward, professor of infectious disease epidemiology at University College London, told the BBC.

A growing body of research supports the concern that the new virus variant may be more than 50 percent more contagious than the already rapidly spreading ones in widespread circulation.

And the variant continued to pop up in countries around the world despite bans on British travelers put in place by dozens of nations.

The British government has turned to a now familiar arsenal of tools to keep the variant in check, increasing restrictions on movement, shuttering businesses and limiting the number of people allowed to gather.

While officials blame the variant for the rise in cases, many of the rules are difficult to enforce on a large scale and it is hard to know what role individual behavior may be playing.

Mr. Johnson’s handling of the pandemic has been marked by last-minute decisions and reversals, fueling public skepticism and anger, but the government has tried to hold the line on keeping schools open.

Since the summer, the government has prioritized keeping students in classrooms, even in areas that saw major outbreaks and during the country’s second national lockdown in November. After students spent the early months of the pandemic in online classes from home, Mr. Johnson in August called the reopening of schools a “moral duty” and promised that in the event of a resurgence of the virus, “the last thing we want to do is to close schools.”

Britain’s approach was similar to that of many European countries where leaders feared that closing schools once again would accentuate inequalities and would irreparably damage children’s academic and emotional development.

But as the number of coronavirus cases skyrocketed, Germany and the Netherlands have reverted to school closures and many of Britain’s teachers are clamoring for the same.

The government had promised a staggered return for schools in January and said that it would rely on mass testing to keep the virus from spreading in schools, using the military to help.

Though some 1,500 soldiers have been put on standby to provide schools with “guidance, materials and funding they need to offer rapid testing to their staff and students from the start of term,” according to Britain’s education secretary, Gavin Williamson, most of the support will be provided remotely, through online sessions and over the phone.

Most schoolchildren will be required to swab themselves, under the supervision of a school employee or a volunteer.

“1,500 troops doing webinars probably isn’t the government response we were looking for,” Geoff Barton, the general secretary of the Association of School and College Leaders, a union, told the BBC.

The country’s two largest teaching unions — the National Education Union and the NASUWT — also criticized the last-minute nature of the mass testing plan and wrote to Mr. Johnson on Monday, asking for additional safety measures and for more time to put them in place.

The country’s scientific advisory group, known as SAGE, has recommended against allowing classrooms to reopen, according to British news reports.

The scientists said Britain’s coronavirus cases would spiral out of control unless schools closed in the new year. The scientific advisory group believes shutting schools in January would allow infection numbers to shrink.

Even as the country’s health workers find themselves under growing pressure to treat the influx of patients, they are also being asked to speed up the most ambitious mass vaccination program in the nation’s history.

Around 200,000 people are getting their first shot of the Pfizer-BioNTech vaccine every week. With the approval of a vaccine from AstraZeneca and the University of Oxford expected in coming days, the number of doses available is likely to expand drastically.

There is no evidence that the vaccines are any less effective against the variant of the virus spreading in Britain, and they remain the best chance for the country to break the back of the current wave of infection.

But to meet the government’s promise to vaccinate all those over the age of 50 by spring, the speed of delivery would have to be 10 times as fast as it is now.

Nick Davies, an assistant professor of mathematical modeling at the London School of Hygiene and Tropical Medicine, said rapid vaccination should blunt the impact of the new variant.

“Achieving 2 million vaccinations/week could substantially reduce the burden,” he wrote on Twitter. The current level of 200,000 a week “does not have much impact.”

That will require not just supply, but the work force to deliver the vaccines. And that means even more pressure on health workers.

Dr. Rebecca Lewis, a surgeon working in a London hospital and the secretary of the Doctors’ Association, described how health care workers are exhausted, with little time to recuperate. Staff sickness, she said, has reached critical levels. The requirements on the use of protective gear have not yet been reviewed in light of the new strain, she said, and may be playing a part in frontline workers contracting the virus.

The country’s vaccination rollout needs to be stepped up, Dr. Lewis said on Tuesday, adding that in addition to the elderly and the vulnerable, vaccinating doctors must be a priority.

“We know that mid-January is going to be awful,” she said.