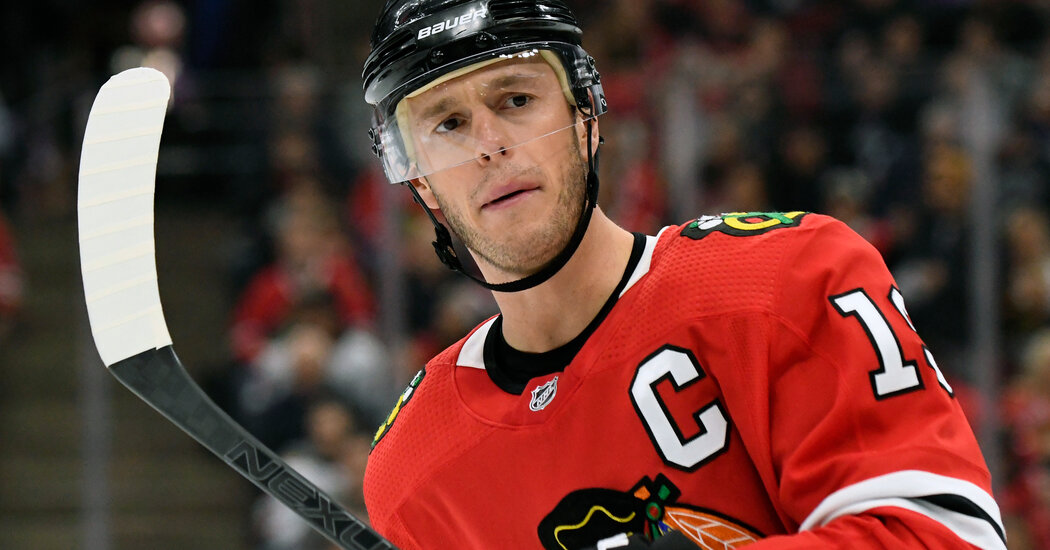 Jonathan Toews, the Chicago Blackhawks’ center and team captain, announced on Tuesday that he would not join the team when it begins training camp on Sunday and that he would be out indefinitely because of a medical condition. He did not say what the condition was, but he described its effects.

“This off-season, I’ve been experiencing symptoms that have left me feeling drained and lethargic,” Toews, 32, said in a statement. “I am working with doctors so I can better understand my condition.”

The absence of Toews, who has won three Stanley Cups with the Blackhawks and received the Selke Trophy as the N.H.L.’s top defensive forward, will add to concerns about the team’s hopes for this season.

Toews joined a pair of the Blackhawks’ top prospects on the unable-to-compete list. Center Kirby Dach (wrist injury) and forward Alex Nylander (knee) will both be out for at least four months.

In the off-season, the Blackhawks committed to inexperienced goalies when they chose not to re-sign the longtime incumbent Corey Crawford, who is now with the Devils. and they traded the veteran forward Brandon Saad to the Colorado Avalanche.

The Blackhawks were in last place in the Central Division when the N.H.L. shut down in March because of the coronavirus pandemic. But Chicago, which had not reached the playoffs in the previous two seasons, was one of the 24 teams to make the expanded playoffs when the league resumed play in the summer. The Blackhawks upset the Edmonton Oilers before bowing to the Vegas Golden Knights.

Toews has been one of the most successful players of his era. In 2017, he was one of six active competitors named to a list of the 100 best players in N.H.L. history, along with two of his teammates, right wing Patrick Kane and defenseman Duncan Keith.

“Until I can get my health back to a place where I feel I can perform at an elite level and help my team, I will not be joining the Blackhawks for training camp,” Toews said.

“I am extremely disappointed, but it wouldn’t be fair to myself or my teammates to attempt to play in my current condition.”

His most productive seasons as an individual have come recently, as the Blackhawks struggled collectively. He had a career-best 81 points in 2018-19 and had 60 points in 70 games last season before play was suspended.

“Jonathan’s health is our top priority as he deals with this medical issue,” Blackhawks General Manager Stan Bowman said in a statement. “The Chicago Blackhawks organization and our medical staff will provide all necessary resources to help him return to playing hockey. While he will not report to training camp on January 3 and will be out indefinitely, we will continue to support him as he is an important part of our family.”

The statement from Toews came a day after goaltender Henrik Lundqvist, a longtime Rangers star who signed with the Washington Capitals in October, announced that he would have open-heart surgery. Lundqvist, 38, revealed earlier this month that he would skip this season to treat a condition that would make playing too risky.

In a Twitter post Monday, Lundqvist said the operation was scheduled, describing it as an “aortic valve replacement, aortic root and ascending aortic replacement, to be exact.”