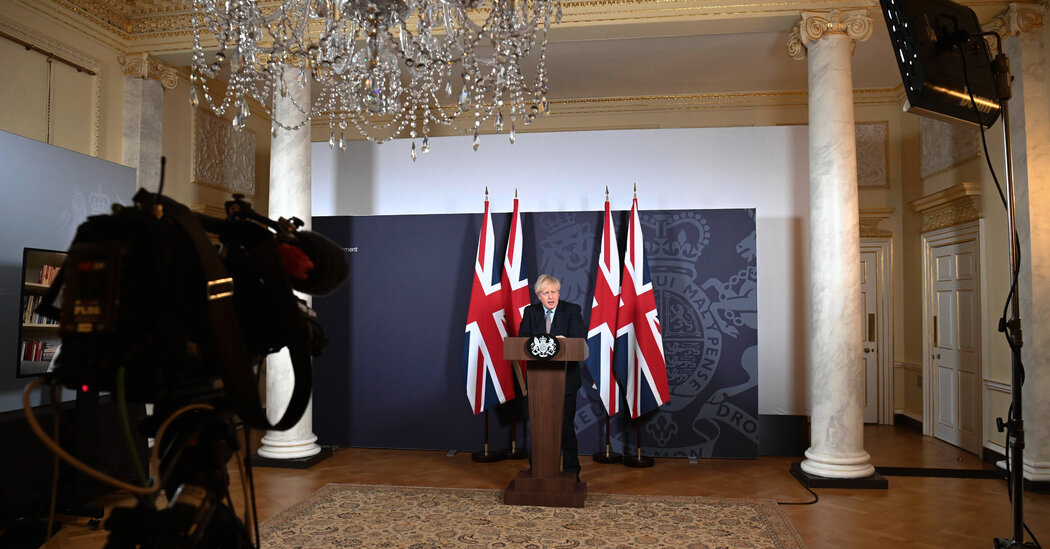 (Want to get this briefing by email? Here’s the sign-up.)

We’re covering Britain’s departure from the Erasmus program, England’s high rate of hospitalization for the coronavirus and 13 dispatches from an unforgettable year.

Once able to study and work anywhere in the European Union without a visa, young Britons will now be treated like people from any other country outside the bloc when it comes to applying for educational programs — or jobs. The withdrawal is also a blow for Britain’s vaunted universities, a powerful symbol of its soft power in Europe and around the world, and an important source of income for the country.

In January, Mr. Johnson had said there was “no threat to the Erasmus scheme.” His announcement on Thursday sent shock waves through universities, angered diplomats and upset British students and professors who had benefited from the program.

Quote: “There will be a relative loss of income for British universities, but from a diplomatic and ambassadorial point of view, the loss is invaluable,” said Sean Hand, the vice president in charge of Europe at the University of Warwick, the second-largest source of Erasmus students from Britain.

Though nearly half of England is under the nation’s strictest lockdown measures, the coronavirus is still spreading at an alarming rate. More than 20,000 people are hospitalized, more than at the peak of the pandemic in April.

Scientists have said that a more contagious variant of the virus is driving the increase in cases. Prime Minister Boris Johnson is under pressure to impose another national lockdown and move students to remote learning. The government is scheduled to meet on Wednesday.

The government said that it would rely on mass testing to keep the virus from spreading in schools, with help from 1,500 soldiers.

Vaccines: About 200,000 people are getting their first shots of the Pfizer-BioNTech vaccine every week. With the approval of an easier-to-distribute vaccine from AstraZeneca and the University of Oxford expected in coming days, the number of doses available will expand drastically.

By the numbers: There were 53,135 new cases reported in Britain on Tuesday, the highest figure yet on a single day.

Here are the latest updates and maps of the pandemic.

At least six people were killed, dozens were wounded and several towns in central Croatia were left in ruins after a 6.4-magnitude earthquake struck just after noon on Tuesday, according to the U.S. Geological Survey and Croatian officials.

The full extent of casualties was not known, and as daylight faded, emergency crews, assisted by the military, searched the wreckage for survivors.

Details: The quake’s epicenter was near the towns of Petrinja and Sisak, home to the region’s largest hospital, which has been rendered largely unusable because of damage. Although people injured in the quake were taken to the hospital to be evaluated, the government said it would evacuate the patients, including moving 40 coronavirus patients to other hospitals.

Voices: “This is a catastrophe,” said Darinko Dumbovic, the mayor of Petrinja, a town of about 25,000 people. “My city is completely destroyed,” he said in an emotional telephone interview from the scene.

If you have 20 minutes, this is worth it

13 dispatches from an unforgettable year

Throughout 2020, our correspondents sent dispatches from some of the world’s most far-flung, hard-to-access and downright dangerous places, often battling travel restrictions to do so. (Above, monks in masks and face shields to protect them from the coronavirus receiving alms from local residents in Bangkok.)

Here are the dispatches that were most popular with readers in a year none of us will forget, no matter where we were.

Here’s what else is happening

Breonna Taylor: More than nine months after the botched raid in which the 26-year-old emergency medical technician was killed, two more Louisville police officers connected to the operation were notified that they would be fired.

Argentina: A bill before the Senate would make abortion legal in the predominantly Catholic nation, the homeland of Pope Francis. Its approval would reverberate widely in the region.

Nazanin Zaghari-Ratcliffe: The British Foreign Office has said it is not legally obligated to provide assistance to the British-Iranian woman, who has been held in Iran since 2016, raising questions about how much protection a Western power is willing to offer its citizens at risk.

Boeing: The troubled 737 Max plane returned to the skies over the United States for the first time in almost two years. The families of those killed aboard two fatal flights argue the Max is still unfit to fly.

Snapshot: Above, a worker-owned cooperative in Spain’s Basque region. Co-ops based in the town of Mondragón employ more than 70,000 people in Spain, and they are attracting attention as an alternative to companies that focus on shareholders. The Mondragón Corporation expects to be profitable despite the downturn this year.

Lives Lived: Over a career spanning more than 75 years, the visionary designer Pierre Cardin transformed the business of fashion. He died this week at 98.

What we’re reading: This essay from The Economist about what it’s like to be a girl today: at once awesome, special and sometimes quite difficult.

Now, a break from the news

Cook: Chicken La Tulipe is a sophisticated take on a roasted chicken, and a Times classic. Fragrant with morels and cognac, it’s an easy, stylish win for newish cooks wooing a sweetheart (or someone who might become one).

Read: Here’s a sneak preview of books coming out in 2021 from around the world. Look out for new work from Alice Zeniter, whose novel traces a history of Algeria over three generations, and the Spanish writer Sergi Pàmies.

Do: Downsize your resolutions. You deserve a break.

There’s never been a better time to try something new. At Home has our full collection of ideas on what to read, cook, watch and do while staying safe at home.

And now for the Back Story on …

Beijing and Brussels are on the brink of an agreement to roll back restrictions on investment — a deal that has been seven years in the making. Though a top priority for Chancellor Angela Merkel of Germany, it faces opposition in Europe. The incoming U.S. administration under Joe Biden also has reservations.

We spoke with Jack Ewing, who has been reporting on the deal from Germany, about what it means.

What is the gist of the deal, and what are its goals?

The problem with investing in China has always been that you had to share technology; you had to operate through joint ventures with Chinese partners. There were a lot of rules. The Chinese government could sometimes tell you where to put your factories. This treaty lifts those restrictions and gives European companies the same freedom Chinese companies get in Europe.

In what ways would this deal give Germany more control over its operations in China?

The main thing is being freed from this joint venture requirement, which is that all foreign companies had to — if they wanted to work in China, they had to form a 50/50 venture with a Chinese company, which split the profits and had access to all of the technology. China has been moving cautiously away from that in the last couple of years, anyway. They allowed BMW to own a larger share of its joint venture.

But critics in the E.U. argue that the deal takes away leverage needed to pressure China on human rights and other issues.

I think the debate over the next couple days will be whether the agreement goes far enough to push China to end its labor abuses, its use of forced labor in some of the minority regions. The other element is that the U.S. and the E.U. together would have more leverage against China than either one of them alone.

That’s it for this briefing. See you tomorrow.

Thank you
Melina Delkic wrote today’s Back Story. Theodore Kim and Jahaan Singh provided the break from the news. You can reach the team at briefing@nytimes.com.

P.S.
• We’re listening to “The Daily.” Our latest episode is about mourning.
• Here’s our Mini Crossword, and a clue: Daddy (four letters). You can find all our puzzles here.
• Fahima Haque, an accomplished editor who has been helping with Race/Related since June, will formally join the National desk as audiences editor next month.