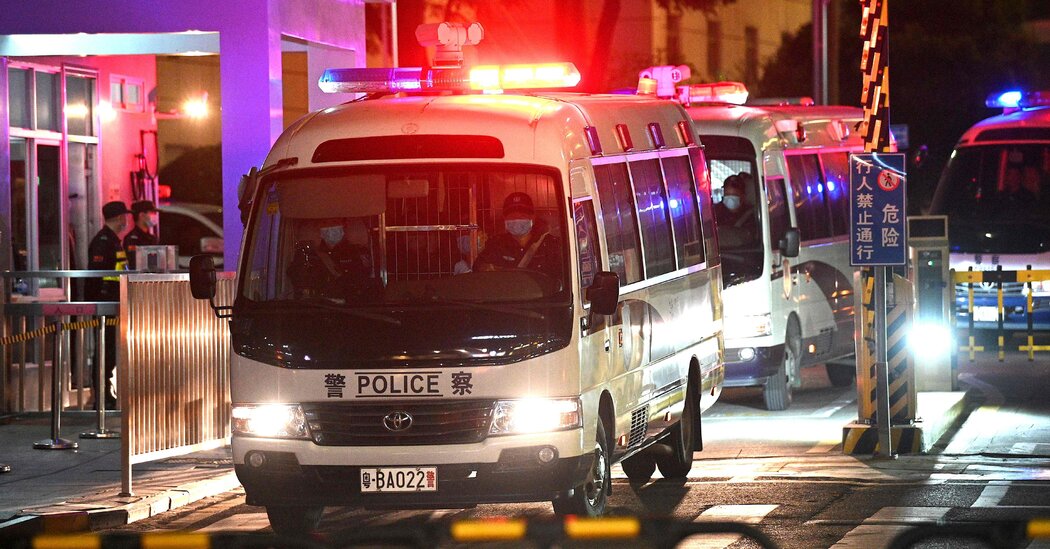 HONG KONG — A group of Hong Kong protesters who were arrested by the Chinese authorities while fleeing the city by speedboat were sentenced by a mainland court to between seven months and three years in prison on Wednesday, in the Chinese Communist Party’s latest offensive against pro-democracy activists.

The case of the 12 protesters, who were caught in August by the Chinese Coast Guard while trying to seek refuge in Taiwan, was closely watched by Hong Kong’s beleaguered opposition movement. For many in the movement, the experiences of the 12 — who were detained in the mainland for months without charges, then tried out of public view — embodied the worst of their fears about Hong Kong’s future under tighter central government control.

It was the nightmare prospect of being subject to the mainland’s opaque criminal justice system that set off the antigovernment protests last year. For the arrested protesters, that nightmare became a reality.

Eight of them were sentenced to seven months imprisonment for illegally crossing a boundary. Two others, Tang Kai-yin, 31, and Quinn Moon, 33, who were charged with the more serious offense of organizing the escape attempt, received three and two years, respectively. The protesters also were fined between 10,000 and 20,000 yuan, about $1,500 to $3,000.

Two other defendants, who were juveniles at the time of their arrest, pleaded guilty in a closed-door hearing and were not subsequently charged, according to a statement on Wednesday from Shenzhen prosecutors. The two juveniles were returned to Hong Kong police custody on Wednesday.

The 12 protesters, who prosecutors said were caught in mainland waters, were not extradited. But their detention and secretive sentencing in Yantian District People’s Court, in the mainland city of Shenzhen, laid bare the differences between Hong Kong’s independent legal system and the courts in the mainland, which are controlled by the Communist Party and often used to silence dissidents.

Hong Kong, a former British colony, was promised 50 years of relative autonomy when it returned to China in 1997. But in recent years, the Chinese government has tightened its grip — most notably with a sweeping new national security law imposed in June. The law, which imposes harsh penalties for vaguely defined acts against the government, is seen by many as hastening China’s total control of the city.

The protesters, most of whom had been previously arrested in Hong Kong and were attempting to avoid trial, were caught about 45 miles southeast of Hong Kong Island after setting out from the territory’s northeast in the early hours of Aug. 23.

Throughout their three-month detention, the protesters were denied access to lawyers selected by their relatives, according to a group that represents family members. They were also not charged with any crimes until this month; in the mainland, defendants are routinely held for long stretches without being charged.

No relatives were able to attend the trial, which began on Monday, according to family members in Hong Kong. The family members were notified of the trial date only three days in advance. The Shenzhen court said in a statement that some unnamed relatives had attended.

Nor was the trial open to observers, despite requests from the family and some foreign diplomats. (Shenzhen officials reportedly said that the courtroom was full.)

The sentences showed “the dangers faced by anybody who finds themselves tried under the Chinese criminal system,” said Yamini Mishra, Amnesty International director for the Asia-Pacific region. “This group of young Hong Kongers will be at risk of torture and other ill-treatment in Chinese jails.”

According to a sentencing report issued by the Shenzhen court, the 10 protesters pleaded guilty and “truthfully confessed the facts of the crime.” The defendants had received relatively light sentences, the court said, in part because Mr. Tang and Ms. Moon had organized the escape at the direction of other unnamed people.

The report said that Mr. Tang had purchased the boat used in the escape attempt, and that he and Ms. Moon then reached out to the other protesters. They departed from Po Toi O, a fishing village in a rural part of northeast Hong Kong, and were detained around 8 a.m. on the same day.

The Hong Kong police said on Wednesday that the two juveniles who had returned from Shenzhen would be quarantined for 14 days and then return to court in Hong Kong to face previous charges related to the protests. Both have missed hearings and violated bail conditions because of the attempted escape, the police said, and may face additional charges.

Hundreds of Hong Kongers have sought refuge in Taiwan in recent months, and many others have moved or are preparing to move elsewhere overseas. Foreign governments that have been critical of China’s crackdown on Hong Kong have said they would offer pathways to citizenship or asylum.

Officials from those governments condemned the arrest and trial of the 10 protesters sentenced on Wednesday. A spokesperson for the United States Embassy in China called for the activists’ “immediate release,” adding in a statement on Monday that “their so-called ‘crime’ was to flee tyranny.”

A spokesperson for the European Union said the defendants’ rights to a fair trial had “not been respected.” And Dominic Raab, the British foreign secretary, said he was “deeply concerned” by the proceedings.

In response to the accusations, Zhao Lijian, a spokesman for the Chinese foreign ministry, said that the United States should “immediately stop interfering in China’s internal affairs and judicial sovereignty.”