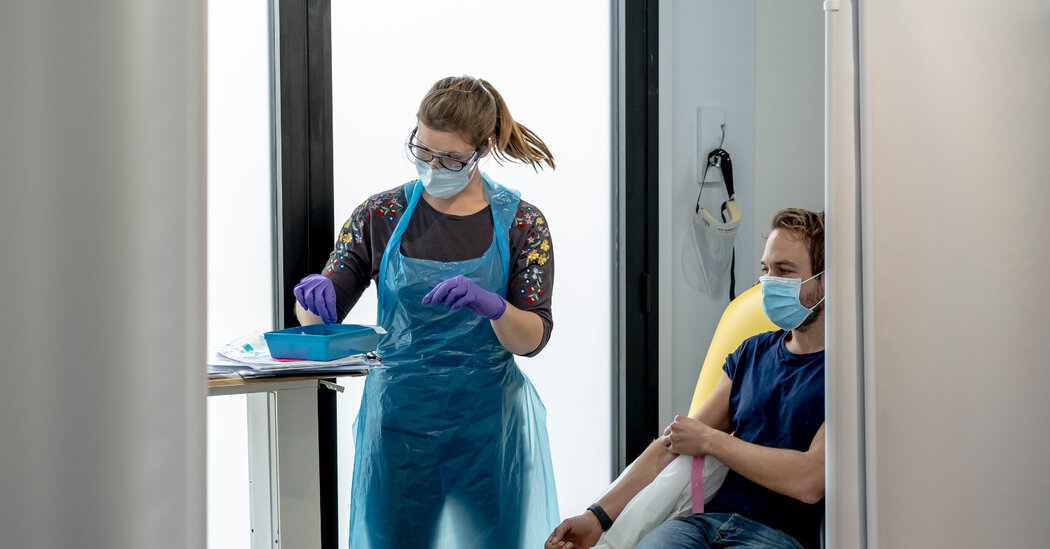 LONDON — Britain on Wednesday became the first country to give emergency authorization to the coronavirus vaccine developed by AstraZeneca and the University of Oxford, clearing the path for a cheap and easy-to-store shot that much of the world will rely on to help end the pandemic.

In a bold departure from prevailing strategies around the world, the British government also decided to begin giving as many people as possible a first vaccine dose, rather than holding back supplies for quick second shots, greatly expanding the number of people who will be inoculated.

That decision put Britain at the vanguard of a far-reaching and uncertain experiment in speeding up vaccinations, one that some scientists believe will curb the suffering wrought by a pandemic that has been killing hundreds of people each day in Britain and thousands more around the world.

The global effort to accelerate vaccinations, coming as a new, more contagious variant of the virus has emerged in Britain, gathered steam on Wednesday as China said clinical trial results showed high efficacy for one of its vaccine candidates, an announcement that sent positive signals about the global rollout of Chinese vaccines but was short on crucial details.

The effects of delaying second doses as a way of giving more people the partial protection of a single dose are not fully known. Britain, believed by experts to be the first country to undertake such a plan, will also delay second doses of the Pfizer-BioNTech vaccine, which has been in use in the country for several weeks and has been shown in clinical trials to have considerable efficacy after a single dose.

Some participants in the clinical trial of the Oxford-AstraZeneca vaccine were given the two doses several months apart. British regulators said on Wednesday that the first dose of the vaccine had 70 percent efficacy in protecting against Covid-19 in the period between that shot taking effect and a second shot being administered, though those figures held for a limited subset of trial participants and have not been published.

Together, the two moves by Britain — authorizing the Oxford-AstraZeneca vaccine and lengthening the gap between doses — offered the clearest signal yet of how countries still in the grip of the virus might hasten the pace of vaccination programs.

The Oxford-AstraZeneca shot is poised to become the world’s dominant form of inoculation. At $3 to $4 a dose, it is a fraction of the cost of some other vaccines. It can be also shipped and stored in normal refrigerators for six months, rather than in the ultracold freezers required by vaccines from Pfizer-BioNTech and Moderna, making it easier to administer to people in poorer and harder-to-reach areas.

“This is very good news for the world — it makes a global approach to a global pandemic much easier,” said Stephen Evans, a professor of pharmacoepidemiology at the London School of Hygiene and Tropical Medicine. Of the decision to delay the second doses, he said, “In a pandemic, it will be better to get more people some level of protection than to have all of the people being vaccinated get full protection.”

Instead of administering the two shots of the coronavirus vaccines within a month as was originally planned, clinicians in Britain will wait as long as 12 weeks to give people second doses, the government said. Matt Hancock, the health secretary, said people would start receiving the AstraZeneca vaccine early next week.

For Britain, where hospitals are overwhelmed by a deluge of cases of a new, more contagious variant of the virus, the decision by its drug regulator offered some hope of a reprieve. The health service is preparing to soon vaccinate a million people per week at makeshift sites in soccer stadiums and racecourses.

No one who received the vaccine in the clinical trials developed severe Covid-19 or was hospitalized.

In recent days, the Oxford scientists who developed the vaccine have voiced some support for delaying second doses. Andrew Pollard, the director of the Oxford Vaccine Group, said in a radio interview on Monday that it made “a lot of sense to get started with as many people as possible” by delaying the second dose.

Britain’s health service must now figure out how to persuade people to take a vaccine that appears less effective than other available shots, but that nevertheless could hasten the end of the pandemic.

The authorization relied on data from late-stage clinical trials in Britain and Brazil. India’s drug regulator is also expected to decide soon whether to authorize the vaccine, which is being manufactured there by a local vaccine producer, the Serum Institute.

A decision is further off in the United States, where the Food and Drug Administration is waiting for data from a separate clinical trial. The study was halted in September and delayed for nearly seven weeks — much longer than in other countries — as regulators investigated whether an illness in a participant in Britain was related to the vaccine. American regulators ultimately allowed the trial to proceed.

Vaccinations have so far been proceeding slowly in many countries, but China and Russia announced on Wednesday what they described as positive developments for inoculations they had developed and that are already in widespread use.

China said that an early analysis of Phase 3 trials of one of its vaccine candidates, which is already in use in the country, showed it had an efficacy rate of 79 percent. If supported, the results would bolster officials’ claims that China’s vaccine candidates are safe and effective.

Russia also secured a vote of confidence in the safety of its Sputnik V vaccine, with Belarus and Argentina this week becoming the first countries outside Russia to begin injecting it on a large scale. Sputnik V has been dogged by criticism since President Vladimir V. Putin announced in August that the vaccine was ready for use even though clinical trials had not been completed.

AstraZeneca has set more ambitious manufacturing targets than other Western vaccine makers, saying that it expects to be able to make up to three billion doses next year. At two doses per person, that would be enough to inoculate nearly one in five people worldwide. The company has pledged to make it available at cost around the world until at least July 2021 and in poorer countries in perpetuity.

But the company has also been dogged by communication blunders that have damaged its relationship with United States regulators and raised doubts about whether the vaccine will stand up to intense public and scientific scrutiny. Those blunders have set back the vaccine’s timeline in the United States, where key F.D.A. officials were stunned to learn of the pause in its clinical trials in September not from AstraZeneca, but from the news media.

These setbacks have not dampened enthusiasm in Britain for the country’s leading homegrown vaccine, one that analysts have said could right the course of Prime Minister Boris Johnson’s careening tenure if rolled out quickly.

Having ordered 100 million doses, 40 million of which are supposed to be available by March, Britain has made the AstraZeneca shot the linchpin of its vaccination strategy. Since authorizing Pfizer’s vaccine on Dec. 2, Britain has used it to vaccinate hundreds of thousands of people. But the country has struggled to administer it beyond hospitals and doctor’s offices, leaving some of its highest-priority recipients, like nursing home residents, still vulnerable.