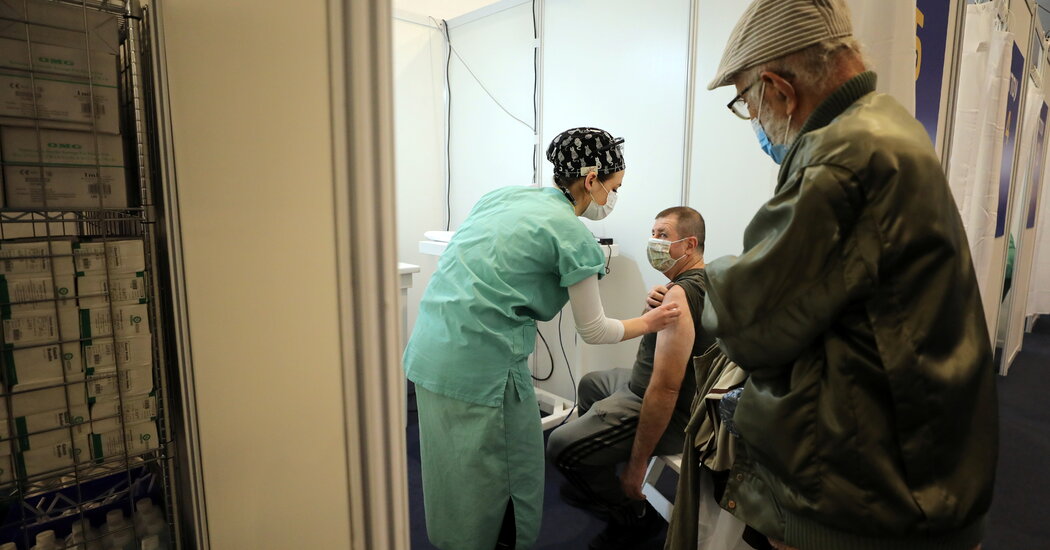 JERUSALEM — More than 10 percent of Israel’s population has received a first dose of a coronavirus vaccine, a rate that has far outstripped the rest of the world and buoyed the battered domestic image of the country’s leader, Benjamin Netanyahu, at a critical juncture.

Israel’s campaign, which began Dec. 20, has distributed the vaccine to three times as much of its population as the second-fastest nation, the tiny Persian Gulf kingdom of Bahrain, according to figures compiled mostly from local government sources by Our World in Data.

“It’s quite an astonishing story,” said Prof. Ran Balicer, the chairman of the national advisory team of experts that is counseling the Israeli government on its Covid-19 response.

Israel’s heavily digitized, community-based health system — all citizens, by law, must register with one of the country’s four H.M.O.s — and its centralized government have proved adept at orchestrating a national inoculation campaign, according to Israeli health experts.

With a population of nine million, Israel’s relatively small size has played a role as well, said Professor Balicer, who is also the chief innovation officer for Clalit, the largest of the country’s four H.M.O.s.

The health minister, Yuli Edelstein, said in an interview on Friday that Israel had entered into negotiations with drugmakers as an “early bird,” and that the companies were interested in supplying Israel because of its H.M.O.s’ reputation for efficiency and gathering reliable data.

“We are leading the world race thanks to our early preparations,” he said.

Internal political conflicts, confusing instructions and a lack of public trust in the government left Israel seemingly fractured in October as the country struggled to cope with a surge in coronavirus cases and deaths that, relative to the size of the population, were among the worst in the world.

While restrictions imposed in the fall reduced the number of new coronavirus cases, in recent weeks, Israel has seen them rise to more than 5,000 a day, sending the country back into a third, if partial, lockdown. More than 420,000 Israelis have been infected and 3,325 have died.

Israeli officials have not publicized the exact number of vaccine doses that it has received so far, or how much it paid for them, saying the agreements are confidential. But if it turns out that Israel overpaid compared to other countries, Mr. Edelstein said, the cost would still be worth it even to reopen the Israeli economy one week earlier than it otherwise could have done.

Prof. Jonathan Halevy, the president of Shaare Zedek Medical Center in Jerusalem, said getting in early had been a “correct strategy.”

With Israel having prioritized health workers and citizens 60 and older, Mr. Edelstein said that a majority of its high-risk population should receive the second of two doses of the Pfizer-BioNTech vaccine by late January. About 150,000 Israelis are being vaccinated per day.

Mr. Netanyahu — who is on trial on charges of bribery, fraud and breach of trust — has made the vaccination campaign something of a personal mission, taking credit for signing agreements and securing millions of doses from Pfizer, along with Moderna and other companies.

With distribution of a coronavirus vaccine beginning in the U.S., here are answers to some questions you may be wondering about:

With Israel heading toward another election in March, the country’s fourth in two years, Mr. Netanyahu has made the prospect of a speedy emergence from the health and economic crisis wrought by the pandemic a keystone of his fight for political survival. He has held out the prospect of Israel becoming the first country in the world to be fully vaccinated.

Political motives aside, the prime minister has won praise for his efforts even from some longtime critics, after being widely blamed for mishandling the crisis last year.

“We can’t blame Netanyahu for all of Israel’s ills — correctly, most of the time — and then ignore his contribution when something works,” wrote Gideon Levy, a columnist for the left-leaning Haaretz newspaper this week.

Mr. Netanyahu became the first Israeli to be inoculated against Covid-19 on Dec. 19, saying he wanted to set an example. On Tuesday, he dropped into a Jerusalem facility to congratulate the 500,000th Israeli to receive a vaccine.

On Thursday, he visited a vaccination center in the town of Tira, in central Israel, to encourage a higher turnout among the country’s Arab minority. Arab citizens, who make up a fifth of the population, have been more hesitant than others to get the vaccine.

“We brought millions of vaccines here, more than any other country in the world relative to its population,” Mr. Netanyahu said, adding, “We brought them to everyone: Jews and Arabs, religious and secular.”

“Come and be vaccinated,” he urged in Arabic.

Arab representatives say they have been battling a flood of disinformation about the vaccine in the Arabic news and social media. Dr. Samir Subhi, the mayor of Umm al-Fahm, where Mr. Netanyahu and Mr. Edelstein visited Friday, told Israeli television that he had sent a voice message to 25,000 phones in the area urging people to get vaccinated and describing the fight against the virus as “holy for everyone.”

Israel’s ultra-Orthodox Jewish community, which has been hit particularly hard by the pandemic, was also seen as a population that might resist vaccinations. But those initial fears appear to have dissipated.

Rabbi Yitzchok Zilberstein, a leading ultra-Orthodox authority in Jewish law, issued a public ruling after consulting with Professor Balicer saying that any dangers posed by the vaccine were negligible compared with the dangers of the virus. Several important figures in the community were photographed getting the vaccine.

So far, the government’s inoculation campaign has not extended to Palestinians in the occupied West Bank and Gaza Strip, who have not had access to any vaccinations yet, and the Palestinian Authority does not appear to have publicly requested them. Legal experts and human rights activists said Israel was obliged to provide the Palestinians with vaccines.

The United Nations humanitarian affairs agency for the occupied territories said this week that the Palestinian Authority had applied for financial support from the global vaccine-sharing system Covax, and was working with international organizations on the logistics.

Mr. Edelstein said the government’s first obligation was to its own citizens, but it was in Israel’s interest to help suppress the infection among the Palestinians. “If, God willing, there will be a situation where we can say we are in a position to help others,” he said, “no doubt it will be done.”

At the headquarters of one of the H.M.O.s in Jerusalem this week, the atmosphere was calm and orderly. A constant stream of people were seated in small booths and injected within a minute or two of their arrival — much less time than it had taken them to get through on the phone to make the appointment.

In Tel Aviv, City Hall and the Sourasky Medical Center said that to meet demand, they were opening a huge vaccination center in the city’s iconic Rabin Square in the first week of January.

Facilities have been accommodating toward younger Israelis who have shown up with older relatives and have sometimes called on the general public to come rather than throw away leftover trays of thawed vaccine that cannot be stored until the next day.

“We make use of every drop,” Sharon Alroy-Preis, a senior Health Ministry official, said on television on Thursday.