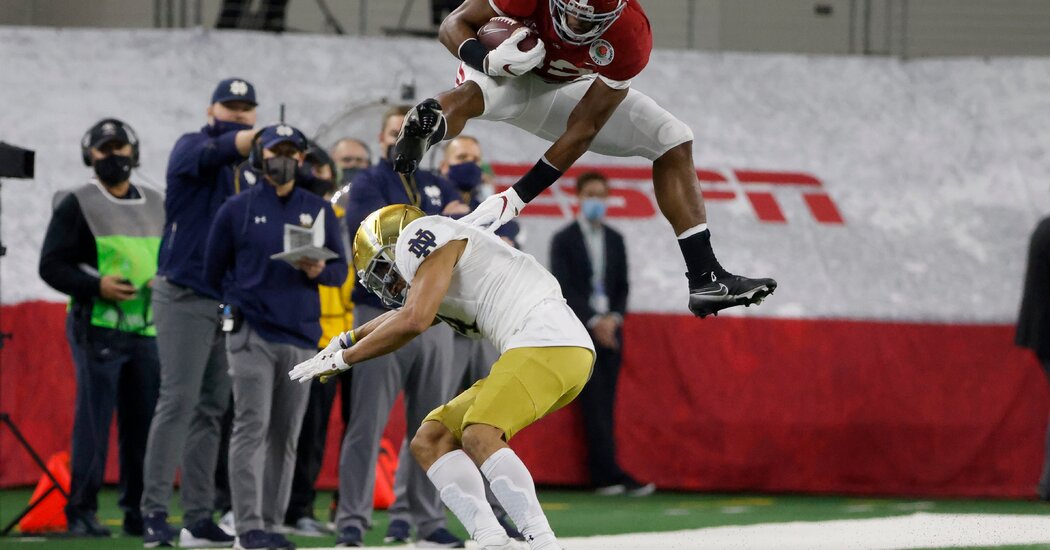 As Alabama running back Najee Harris took a handoff, bounced outside and headed upfield, he was confronted by Notre Dame cornerback Nick McCloud, who charged up to meet him with his shoulder lowered.

No matter. Harris, a 6-foot-2, 229-pound senior, treated McCloud like an oversize fire hydrant, leaping over him with the clean, syncopated stride of an Olympic hurdler and galloping down the sideline.

The play was the signature moment in Alabama’s 31-14 victory over Notre Dame in a College Football Playoff semifinal Friday night in Arlington, Texas — Harris’s elegant athleticism epitomizing how effortlessly the Crimson Tide dispatched the Fighting Irish.

The win reinforced the legitimacy of Alabama’s return to the top of the college football ladder after it missed the four-team playoff for the first time last season. The top-ranked Crimson Tide ripped through a Southeastern Conference-only schedule, outscored a dogged Florida team in the conference title game and now has advanced to the Jan. 11 championship against Ohio State, which throttled Clemson, 49-28, in Friday’s other semifinal.

This matchup would not have been a tremendous surprise last summer — the teams were ranked No. 2 and 3 at the start of the season — but the Buckeyes’ presence in the playoff is particularly fitting.

In this disjointed pandemic season, their coach, Ryan Day, and their quarterback, Justin Fields, were at the head of a campaign that persuaded the Big Ten presidents to reverse course after they had canceled the season in August.

What finalist could better represent how disruptive the coronavirus has been than a team that played only five regular-season games — three were canceled because of outbreaks — and as a result needed dispensation from the Big Ten to play for the conference title?

That abbreviated schedule, just over half the length of the other semifinalists’ seasons, led some coaches to question whether Ohio State should have been selected for the four-team playoff — including Clemson Coach Dabo Swinney, who ranked the Buckeyes 11th in the final coaches’ poll.

Ohio State may have viewed that as a slight, but it already had more organic motivation in Friday’s game — avenging a crushing 29-23 loss to the Tigers in last season’s semifinal that was sealed when Fields threw a late interception in the Clemson end zone.

That throw was one of many regrets then. It was hard for the Buckeyes to find a serious one in New Orleans on Friday night.

The only real concern might be lingering physical pain — Fields moved around gamely but gingerly after taking a crushing hit to the ribs from Clemson linebacker James Skalski, who was ejected for targeting.

“That hit really took a toll on me,” Fields said in a television interview, adding later that he received one or two injections in the sideline medical tent during the game. “My ribs were killing me pretty much all game.”

The Buckeyes (7-0), who rolled up 639 yards in total offense, will need all the firepower (and good health) they can muster in 10 days.

Alabama’s dynamic offense, which revolves around quarterback Mac Jones, receiver DeVonta Smith and Harris — all of whom finished in the top five in Heisman Trophy balloting — was held below 40 points for the first time since its season opener. Still, it zipped down the field for touchdowns on its first three drives, and Notre Dame never truly threatened the Crimson Tide.

Though Harris, who finished with a total of 125 yards rushing, had the highlight-reel play, Smith showed why he is the presumed favorite to win the Heisman. On his first touch, he took a quick pass at the line of scrimmage and used a textbook block by John Metchie III to scoot 26 yards for a touchdown. He ended up with three touchdowns among his seven catches for 130 yards.

All the while, Jones was typically close to flawless, completing 25 of 30 passes for 297 yards.

About the only person on Alabama’s sideline who looked uncomfortable was Coach Nick Saban, who drew a late unsportsmanlike penalty after ranting at officials.

“We didn’t finish the game the way we liked,” Saban said in a television interview, adding with a knowing smile, “I’ve always got something to complain about.”

Still, after a year away from the playoffs, he was pleased enough.

“These guys have really earned the opportunity to play in the national championship game, so we’ll see what we can do with it,” he said.

If Alabama (12-0) disposed of Notre Dame (10-2) with familiar efficiency, it was not hard to be reminded of the circumstance under which this game — and entire season — took place, in the middle of a pandemic that has upended sports.

The logo at the center of the Dallas Cowboys’ stadium was a familiar one on New Year’s Day — the red stylized Rose Bowl Game logo, which normally adorns its namesake stadium in Pasadena, Calif.

But this year, after Notre Dame Coach Brian Kelly threatened to boycott the Rose Bowl because health rules in California would not allow families to attend the game, the Rose Bowl was moved to Texas — the first time it had not been played in Pasadena since 1942, when it was moved to Durham, N.C., shortly after Japan bombed Pearl Harbor.

They witnessed a familiar ending under the bright lights for Notre Dame.

The Fighting Irish have now lost seven consecutive major bowl or playoff games since 2000, none of which has been closer than 14 points.

“We just needed more firepower, quite frankly. That’s it,” Kelly said, pushing back against criticism of his program’s recent history. “There is no other wider story than we came up a little short with making a few plays.”

Clemson (10-2), despite winning two national championships and reaching two other title games since 2015, ended its second consecutive season watching its defense get carved up. The Tigers surrendered 628 yards in a 42-25 loss to Louisiana State in last season’s title game.

Fields, who passed for 385 yards and six touchdowns, and running back Trey Sermon, who gashed the Tigers for 193 yards rushing, may not find things quite as easy against Alabama.

The Crimson Tide is trying to atone for its own disappointment last season, and in this season of fits and starts and unexpected obstacles, it has managed to clear every hurdle.