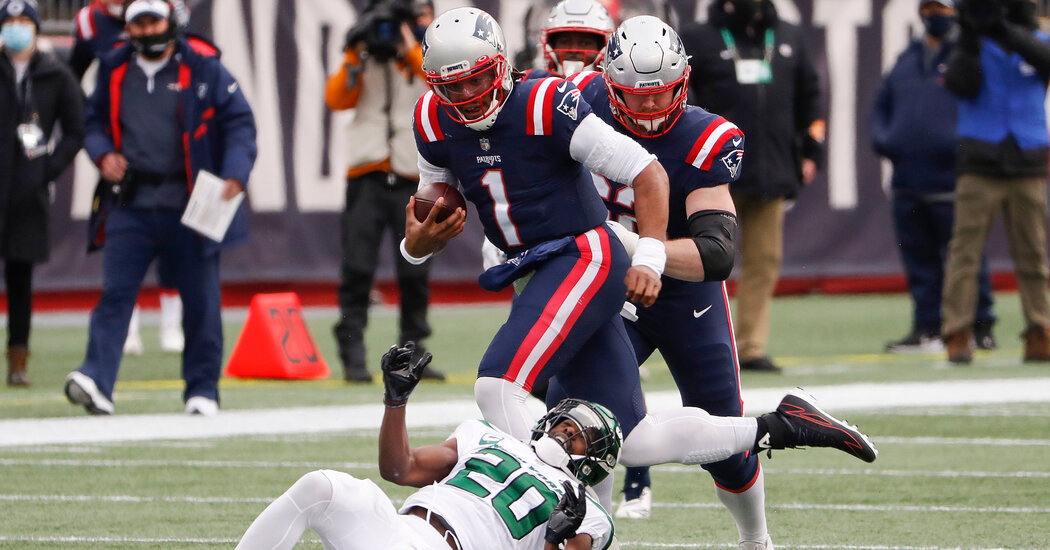 FOXBOROUGH, Mass. — Cam Newton saved his best performance this season for what was likely his final game with the New England Patriots.

Newton threw three touchdown passes and caught another, and the Patriots rallied to beat the Jets, 28-14, on Sunday.

The win snapped a three-game losing streak for New England (7-9), which earned its 10th straight win over the Jets (2-14) but won’t be playing in the postseason for the first time since the 2008 season.

While it won’t erase the disappointment of New England missing the playoffs, it was a nice finish for Newton, who entered the season with the weighty task of succeeding Tom Brady following his departure to Tampa Bay.

Newton was 21 of 30 for 242 yards, his first game with multiple passing touchdowns this season. He also ran 11 times for 79 yards. Newton played under a one-year deal this season. He said he hasn’t contemplated where he will go from here.

“I have my desires,” he said. “I know where my heart’s at. I know the things of who I am. But as far as that, I can’t really speak on that right now. But just my whole time in New England has just been a blessing. Just see how it goes and go from there.”

“It was good to end a disappointing season on a positive note,” he said.

“I don’t really have anything to say about next year,” Belichick said.

New England trailed 14-7 early in the third quarter, but outscored the Jets 21-0 the rest of the way in what was likely Adam Gase’s final game as the Jets’ coach. Gase said he didn’t have any expectations regarding his future.

“I’m sure we’ll talk tonight or tomorrow,” Gase said. “I’m not going to predict anything.”

Quarterback Sam Darnold, whose future with the Jets is also uncertain, was 23 of 34 for 266 yards, a touchdown and two second-half interceptions. Like Gase, he said he wasn’t thinking about his future beyond Sunday.

“I’m not going to do that right now,” Darnold said. “Whether I stay, whether I leave — whatever happens, I’ll deal with it when it comes.”

The Jets moved quickly on the first possession of the third quarter, taking their lead on Josh Adams’ 1-yard touchdown run. The score was set up by a 53-yard completion from Darnold to Breshad Perriman that got the ball inside the Patriots’ 15-yard line.

New England went to its bag of tricks to tie it back up.

With the ball on the Jets’ 19-yard line, Newton handed the ball off to Sony Michel, who flipped the ball back to receiver Jakobi Meyers on an end-around. But Meyers stopped in the backfield and tossed a pass to a wide-open Newton for the touchdown. It marked the second touchdown pass of the season for Meyers.

Darnold was intercepted by J.C. Jackson on the Jets’ ensuing drive, giving the ball back to the Patriots on the Jets’ 45-yard line.

The Patriots took advantage, scoring four plays later on a 26-yard touchdown pass from Newton to tight end Devin Asiasi to make the score 21-14 with 13:56 left in the game.

It was 7-7 at halftime as both offenses had trouble sustaining drives. The exceptions came at the beginning and end of the half.

Newton made plays with both his arm and feet on the opening series of the game to put the Patriots in front.

First, he scampered for a 49-yard run to get New England down to the 15-yard line. Four plays later, he connected with James White on a 7-yard touchdown pass to cap a seven-play, 84-yard drive.

The Jets had their most success on their second to last possession of the first half when Darnold punctuated their 10-play, 80-yard drive by threading a pass between a pair of defenders in the end zone to Chris Herndon for a 21-yard touchdown.