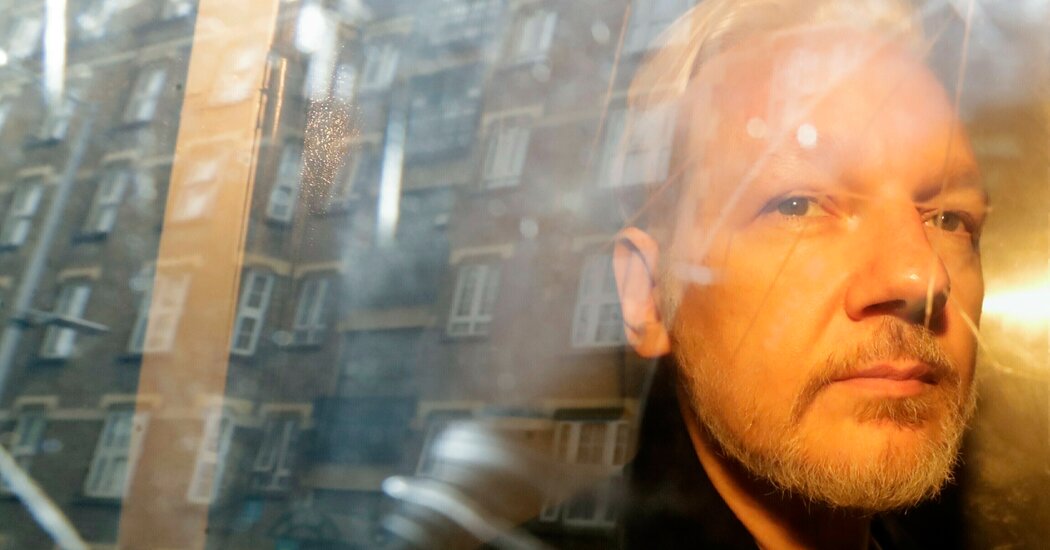 LONDON — A judge in London on Wednesday declined to release Julian Assange on bail while he awaits a final resolution in the case to extradite him to the United States to face charges of violating espionage laws.

On Monday, the judge ruled that Mr. Assange could not be extradited to the United States because he would be at risk of suicide, and his lawyers sought to have him released on bail while the appeals process plays out. The decision on Wednesday was a setback for the WikiLeaks founder, who has sought for years to avoid a trial in the United States on charges that his supporters say pose a threat to press freedom.

The judge, Vanessa Baraitser of Westminster Magistrates’ Court, said Wednesday that Mr. Assange — who spent seven years holed up in the Ecuadorean Embassy in London to avoid another extradition order — still had an incentive to abscond, and that he needed to remain in prison while U.S. prosecutors challenged her decision on his extradition.

Mr. Assange, 49, was indicted by the United States authorities in 2019 on 17 counts of violating the Espionage Act and one count of computer misuse over his role in obtaining and publishing secret military and diplomatic documents related to the wars in Iraq and Afghanistan. If found guilty on all counts, he could face a sentence of up to 175 years.

On Monday, Judge Baraitser ruled that Mr. Assange, who suffers from depression and has an autism spectrum disorder, could not be extradited because “it would be unjust and oppressive” given his mental condition.

But the judge rejected arguments by Mr. Assange’s legal team that the charges against him were an attack on press freedom and were politically motivated.

Claire Dobbin, a lawyer representing the United States, said on Wednesday that American prosecutors would appeal the extradition ruling, which is likely to keep Mr. Assange’s case in British courts for at least several months. The case could eventually land in front of Britain’s Supreme Court.

Stella Morris, Mr. Assange’s partner, reiterated her calls that the charges against the WikiLeaks founder be dropped and that he be granted a presidential pardon.

“It’s a huge disappointment,” Ms. Morris said in a brief statement outside the court after Mr. Assange was denied bail. “Julian shouldn’t be in Belmarsh prison in the first place.”

The editor in chief of WikiLeaks, Kristinn Hrafnsson, said Mr. Assange’s lawyers would most likely appeal the denial of bail.

In 2010 and 2011, Mr. Assange published confidential military and diplomatic documents related to the wars in Iraq and Afghanistan and provided by the former U.S. Army intelligence analyst Chelsea Manning. In 2012, he took refuge at the Ecuadorean Embassy in London to escape extradition to Sweden, where he faced an inquiry into rape accusations. That inquiry was later dropped.

During his seven years at the embassy, he continued to run WikiLeaks as a self-proclaimed political refugee. The British police arrested him in 2019.

Since then, Mr. Assange, an Australian citizen, has been held at Belmarsh, a high-security prison in London where he served a 50-week sentence for skipping bail when he entered the Ecuadorean Embassy to avoid extradition to Sweden. He has completed that sentence but has remained at the prison while the American extradition case makes its way through the British courts.

Doctors and experts who have examined Mr. Assange in prison said during the extradition hearings that he suffered from depression and memory loss.

“I can attest to the fact that his health has seriously deteriorated, to the point where his life is now in danger,” Nils Melzer, the United Nations special rapporteur on torture and ill treatment, said last month in urging President Trump to pardon Mr. Assange. Mr. Melzer, who visited Mr. Assange in prison, said last year that his incarceration amounted to “psychological torture.”

Lawyers argued during the hearings that Mr. Assange’s mental health would deteriorate if he were extradited, and have pointed out that Mr. Assange and other detainees at Belmarsh have been isolated for months after a coronavirus outbreak at the prison.

“We fully believe that his mental and physical health are at high risk over a prolonged detention at Belmarsh prison,” Ms. Vincent said. “He has endured 10 years of hell for simply publishing information in the public interest.”

Should Mr. Assange ultimately lose in Britain, his legal team could also try to take the case to the European Court of Human Rights.

Prime Minister Scott Morrison of Australia said on Tuesday that should higher courts in Britain ultimately blocked Mr. Assange’s extradition to the United States, he “would be able to return to Australia like any other Australian.”