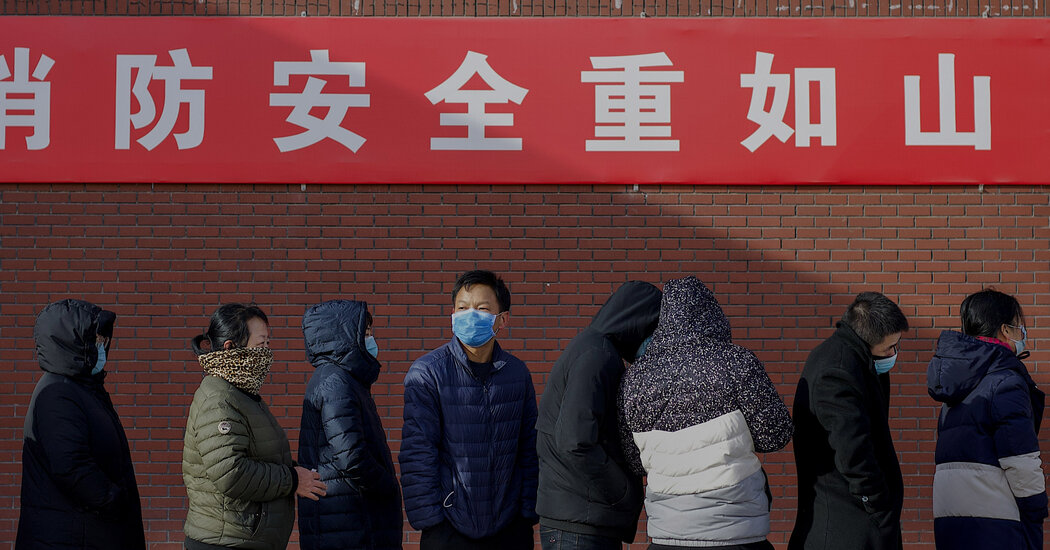 Brazilian officials said Thursday that a coronavirus vaccine made by a Chinese company was effective, bolstering the chances of approval for a second Chinese inoculation that could be rolled out in much of the developing world.

Officials in the state of São Paulo, where a prominent medical research institute carried out a large study of the vaccine made by the Beijing-based Sinovac, said the inoculation had an efficacy rate of 78 percent.

The vaccine prevented all participants from developing serious and mild complications from the virus, officials said, calling it a highly effective preventive tool.

In anticipation of approval, the vaccine, CoronaVac, has already been shipped around the world as countries prepare for mass inoculation campaigns. Sinovac has sold more than 300 million doses, mostly to low- and middle-income countries, accounting for about half of the total doses that China says vaccine makers were capable of producing in 2020, based on an analysis of company statements and media reports.

China has set its sights on supplying the developing world with a Covid-19 vaccine, in a push to position itself as a leader in health diplomacy after its failures in the early days of the outbreak. It also wants to burnish its credentials in science by becoming a major player in the global vaccine business.

Even without the regulatory greenlight, China has embarked on an aggressive vaccination drive at home, with the goal of inoculating 50 million people by the middle of next month. Beijing has also developed an overseas distribution plan for exports, directing airlines to stock up on refrigerators and dry ice.

China is filling a void in poorer nations left by Western competitors. The United States is mainly focused on working through the chaos of distributing its vaccines at home. The European Union and other rich countries have bought many of the doses supplied by the American drugmakers Pfizer and Moderna.

“The Chinese have been eager to get out in front, aware of the gap and the hoarding and pre-purchase of so many billions of doses by the Western governments that is leaving so many countries high and dry,” said J. Stephen Morrison, director of the global health policy center at the Center for Strategic and International Studies.

“It will become a tool in their diplomatic alliances, and it will give them some measure of prestige and standing with countries that choose to make use of them,” he added.

Unlike players from the United States, Chinese vaccine makers had to think globally almost from the start. The companies had to go abroad to test the efficacy of their vaccines because the outbreak had been largely stamped out in China.

In recent months, Chinese companies have signed agreements with at least 15 countries and regions, providing early access to doses. Their vaccines have been rolled out in the United Arab Emirates and Bahrain after being approved for emergency use.

Many of their early customers were the governments that cooperated on the late-stage, Phase 3 trials. Brazil has roughly 10.8 million doses of the vaccine on hand and intends to start producing it locally, and Indonesia and Turkey have both received shipments of Sinovac vaccines. Sinovac has said it is able to produce 600 million doses this year.

These deals could help vaccine makers shake off the industry’s tarnished reputation after a series of quality and corruption scandals. For decades, Chinese vaccine makers focused only on serving their domestic market. Only five Chinese vaccines have been preapproved for export by the World Health Organization — one of them is a hepatitis A shot made by Sinovac.

The results in Brazil are closely watched by regulators in other countries that are conducting trials for the Sinovac vaccine because it had the biggest number of volunteers, at 12,476. Turkey announced on Dec. 24 that the vaccine had an efficacy rate of 91.25 percent, but it was based on preliminary results from a small clinical trial. The scientists who ran the trial discussed the results at a news conference, but they did not provide the data online in written form.

The Chinese government said on Dec. 31 that it had approved another coronavirus vaccine made by the state-owned company Sinopharm. Sinopharm had announced that its Phase 3 trials showed that its vaccine had an efficacy rate of 79.34 percent, but it did not provide any further trial data, making it impossible for outside experts to evaluate the claim.

Dimas Covas, the director of Butantan Institute, which carried out the study, declined to provide detailed data about the vaccine study, including the number of people who contracted the virus broken down by placebo and vaccine volunteers.

In other countries, the vaccine was tested on ordinary people, but Dr. Covas said the Brazilian CoronaVac study relied solely on medical professionals, who were at higher risk of getting the virus than the general population.

“The vaccine was submitted to a hard test,” he said, adding that none of the test volunteers developed serious or moderate cases of Covid-19 or required hospitalization.

Officials in São Paulo said they were hopeful that Brazil’s health regulatory agency would approve emergency use of the vaccine within days. The country hit a grim milestone on Thursday: 200,000 deaths from the virus.

If approval is granted, officials said, Brazil could produce up to one million doses of the vaccine per day.

Like the Sinopharm vaccine, CoronaVac is made with a traditional technology that uses an inactivated virus to provoke the body’s immune system to produce antibodies.

These vaccines tend to have weaker efficacy rates, but they can be kept at refrigerated temperatures, making transportation and storage easier. Such characteristics are especially important for developing countries that may not have the infrastructure to maintain the frozen vaccines made by Pfizer and Moderna. Sinovac’s chief executive, Yin Weidong, called the inactivated technology “the best” one for the vaccine.

Even before the pandemic, Sinovac’s reputation was well established within the biotech world. In 2003, it was the first company in the world to develop an experimental vaccine for another coronavirus outbreak — severe acute respiratory syndrome, or SARS.

The company started testing it on humans but had to scrap further trials after the outbreak ended. But the experience proved fortuitous.

Sinovac began work on a Covid-19 vaccine soon after a top Chinese epidemiologist disclosed on national television in late January that the coronavirus in Wuhan was being transmitted between humans. Scientists at the company canceled their Lunar New Year vacations and set to work on Operation Coronavirus.

Mr. Yin, 56, started his career as a doctor at the local disease and control center in the northern city of Tangshan. He was troubled by the scourge of hepatitis A and began wondering how he could make a vaccine to curb the disease.

Along the way, Sinovac has been caught up in the industry’s bad practices. From 2002 to 2011, Mr. Yin paid $77,000 to a senior Chinese drug regulator, Yin Hongzhang, and his wife to approve his vaccines, according to a 2018 filing to the Securities and Exchange Commission, citing court documents.

The regulator was jailed in 2017 for taking bribes from company executives, including the head of another vaccine company that has joined forces with AstraZeneca to make a Covid-19 vaccine. The executives did not face scrutiny.

A Sinovac spokesman, Pearson Liu, said the incidents happened more than 10 years ago, adding that “neither Mr. Yin nor the company have been accused of any wrongdoing by any government authority on the allegations.”

Sinovac’s key shareholders tried to use the bribery case involving Mr. Yin to oust him from his company. The messy battle culminated in the firm’s electricity supply being cut off by representatives of a key shareholder and a temporary halt to the supply of hepatitis A vaccines in China.

Through it all, Mr. Yin has emerged unscathed, creating a corporate front-runner in China’s Covid-19 vaccine outreach efforts.

After promising early-stage trials, Sinovac determined that it would need help from a research institute in a place with an active outbreak. Brazil has the third-highest number of Covid-19 infections in the world after India and the United States, at 7.8 million cases, allowing Sinovac to test much faster for the efficacy of its vaccine.

The Butantan Institute in Brazil looked like an ideal partner. Both companies had developed a relationship that had started before the pandemic, said Dr. Covas, the director. The institute was also well versed in the technology that Sinovac was using.

“We had common interests and, especially, the capacity to do this very quickly,” Dr. Covas said in an interview.

In going abroad, Sinovac has been forced to navigate political minefields.

The company’s website was defaced by hackers from Turkey in recent weeks. The hackers put up the flag of East Turkestan, an emblem banned in China and generally used as a symbol of independence for the Uighurs, a Turkic Muslim minority group.

Its clinical trial has been criticized by supporters of President Jair Bolsonaro, who has rejected his health ministry’s plan to buy 46 million doses. In November, the trial was briefly suspended after the death of a participant, a regulatory move that Mr. Bolsonaro — who has blamed China for the pandemic — hailed as a victory. The trial was resumed after the health authority ruled that the death had been unrelated to the vaccine.

It is unclear whether the Sinovac vaccines will even be used throughout Brazil. João Doria, a rival of Mr. Bolsonaro’s and the governor of the State of São Paulo, which has run the trials for Sinovac, has negotiated directly with the Chinese company for vaccine doses. He has announced that his state intends to start vaccinating people in late January, subject to regulatory approval. It’s the only state in the country to buy the Sinovac vaccine.

After the announcement on Thursday, Brazil’s health minister, Eduardo Pazuello, told reporters that the federal government intended to purchase 100 million doses of CoronaVac.

“This vaccine will save millions of people,” Mr. Doria said Thursday at a news conference. “Today is a day of hope.”