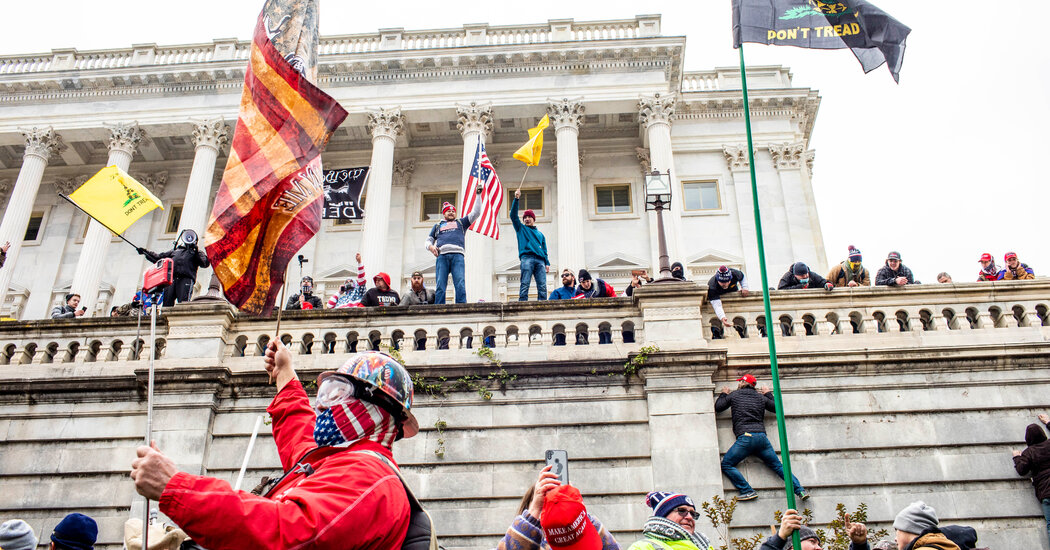 BERLIN — Chancellor Angela Merkel of Germany on Thursday placed the blame for the mob violence at the U.S. Capitol a day before squarely on President Trump, although she and other leaders of the United State’s strongest allies in Europe expressed faith in the strength of American democracy.

“I deeply regret that since November, President Trump has not accepted that he lost, and did not do so again yesterday,” the chancellor said. “He stoked uncertainties about the election outcome, and that created an atmosphere that made the events of last night possible.”

Ms. Merkel grew up in Communist East Germany and has spoken frequently about her admiration for the United States, even in the face of tensions between Berlin and Washington during her more than 15 years in power. Her comments on Thursday reflected a deep-seated faith in the strength of democracy in the United States held by many in Europe.

Yet images of armed rioters carrying blue pro-Trump flags storming and vandalizing the halls of the Congress shocked, saddened and angered many in Europe, where an older generation still speaks with reverence over the American role in securing peace after the bloodshed of two World Wars.

For others, especially younger Europeans, the pictures of armed rioters dressed in camouflage or outlandish superhero outfits reinforced the stereotype of Americans as gun-toting cowboys with little regard for the rule of law, a view that has been solidified in the minds of many over the four years of the Trump presidency.

In 2016, Ms. Merkel marked President Trump’s election by reminding him in a speech that “freedom, the respect for the law and dignity of human beings, independent of their origin, skin color, religion, gender, sexual orientation or political beliefs” are the principles of a liberal democracy.

On Thursday, she reminded him how a democratic election is supposed to work.

“A basic rule of democracy is that after elections there are winners and losers. Both must play their role with civility and a sense of responsibility so that democracy remains the winner,” said the German chancellor, who was escorted onto the floor of the U.S. House of Representatives by Mr. Biden in 2009 to address a joint session of Congress.

“It is tragic that people lost their lives in the events, but for me it is a sign of hope that Congress continued its work overnight and now it is clear that Joe Biden and Kamala Harris have been confirmed and the United States will begin a new chapter in two weeks, as it should be,” Ms. Merkel said on Thursday.

Despite their opposing personalities and leadership styles, the chancellor managed to maintain cordial relations with Mr. Trump throughout his term. German lawmakers and members of the chancellor’s cabinet also maintained ties to their Washington counterparts who continued to value international cooperation.

Recalling France’s support for the colonists during the American Revolution and the United States’s support for France during two World Wars, Mr. Macron also struck a note of hope.

France, he said, stood “strongly, fervently and resolutely with the American people and with all people who want to choose their leaders, determine their own destinies and their own lives through free and democratic elections.”

Even Italy’s prime minister, Giuseppe Conte, one of Mr. Trump’s closest allies in Europe, expressed faith in the idea that U.S. democracy would triumph over forces trying to sabotage it. “Violence is incompatible with the exercise of democratic rights and freedoms,” he wrote on Twitter. “I am confident in the strength and robustness of the institutions of the United States.”

Likewise, Spain’s prime minister, Pedro Sánchez, saw a reason for hope. “Yesterday’s attack on Capitol Hill has only succeeded in reaffirming the principles we share,” he wrote on Twitter. “Spain will work with the United States for a more just world and the triumph of democracy over extremism.”