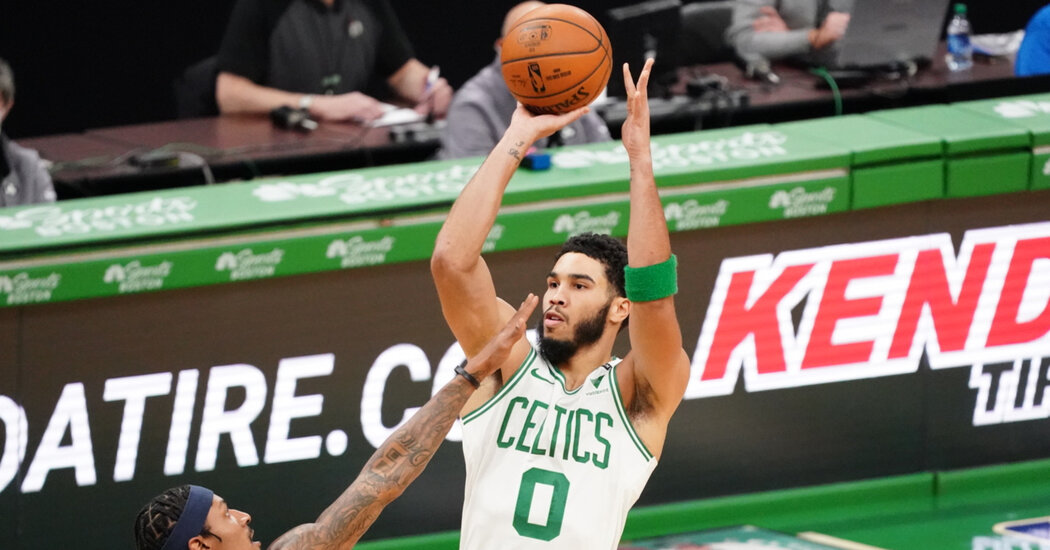 The N.B.A. postponed a game on Sunday night between the Miami Heat and the Boston Celtics when the Heat did not have enough available players because of the league’s coronavirus health and safety protocols. It was the second game of the season postponed after the protocols left a team short-handed.

“Because of ongoing contact tracing with the Heat, the team does not have the league-required eight available players to proceed with tonight’s game against the Celtics,” the league said in a statement.

The Celtics on Sunday were also missing a significant portion of their roster, including their stars. Less than a month in, the season is trending in the wrong direction, with a growing number of players missing games after testing positive for, or potentially being exposed to, the virus.

“We anticipated that there would be game postponements this season and planned this season accordingly,” Mike Bass, a league spokesman, told The New York Times. “There are no plans to pause the season. We will continue to be guided by our medical experts and our health and safety protocols.”

Along with the Celtics and the Heat, the Philadelphia 76ers, the Dallas Mavericks and the Chicago Bulls listed at least three players on their injury reports over the weekend in connection with the league’s virus protocols. Multiple other teams also had at least one player listed, a marked contrast from the N.B.A.’s conclusion to the 2019-20 season at the Walt Disney World campus in Florida over the summer. No games were postponed then, and no players were said to have tested positive.

The N.B.A. postponed a game between the Houston Rockets and the Oklahoma City Thunder on just the second day of the season when the Rockets did not have enough available players because of injuries and virus protocols.

The league’s injury reports do not say whether a player is out because he has tested positive or was just potentially exposed. A player who tests positive could be isolated for at least 10 days, and one who is exposed could be in quarantine for several days.

“We’re all dealing with a vast set of circumstances, so we’ve got to remain calm, and we’ve always got to have a plan for adversity,” Coach Rick Carlisle said before the Mavericks’ game against the Orlando Magic on Saturday, when Dallas was missing three players because of virus protocols. “We’ve been expecting that this sort of thing was certainly a realistic possibility, and now we’re dealing with it.”

The Sixers used only seven players against the Denver Nuggets on Saturday after Philadelphia guard Seth Curry tested positive. Four players missed the game because of virus protocols. Joel Embiid and Ben Simmons, the Sixers’ stars, also missed the game, although Coach Doc Rivers said their absences were because of lingering knee (Simmons) and back (Embiid) injuries. Before the game, in response to a question about whether he had told the league he did not want to play with so few players available, Rivers said he was concerned.

“I don’t think we should,” Rivers said. “It’s not for me to express that. I do worry about our player health on the floor.”

The Nuggets won Saturday’s game, 115-103. Tyrese Maxey, a Sixers rookie, scored 39 points in his first career start to help Philadelphia keep the game competitive. But the Nuggets overwhelmed the Sixers in the second half.

The Celtics, who were scheduled to play the Heat on Sunday at 7 p.m., Eastern time, would have been without seven players because of virus protocols. Before the postponement, the only player the Heat said would be out because of the protocols was Avery Bradley. The Heat’s next game is against the Sixers on Tuesday.

The Celtics played the Washington Wizards on Friday night. Afterward, the Celtics’ Jayson Tatum and the Wizards’ Bradley Beal stood near each other having a conversation on the court. The Athletic reported that the conversation, with Beal’s exposure to Tatum, was what led to Beal’s having to miss a game against the Heat on Saturday night. According to multiple reports, Tatum learned after Friday’s game that he had tested positive for the virus.

Even before the weekend, some teams had played games without key players because of the protocols. Kevin Durant of the Nets missed most of the last week, but he was available for Sunday evening’s game against the Thunder. The Nuggets have been without forward Michael Porter Jr. all month, and it is unknown when he will return.

Commissioner Adam Silver said at a preseason news conference that he was confident that the N.B.A. would be able to finish its planned 72-game season.

“If we weren’t, we wouldn’t have started,” Silver said.

But as to what it would take to suspend the season, Silver said: “The view is, I think, if we found a situation where our protocols weren’t working, meaning that not only did we have some cases of Covid but that we were witnessing spread either among teams or even possibly to another team, that would cause us to suspend the season.”

He continued: “I think we are prepared for isolated cases. In fact, based on what we’ve seen in the preseason, based on watching other leagues operating outside the bubble, unfortunately it seems somewhat inevitable.”