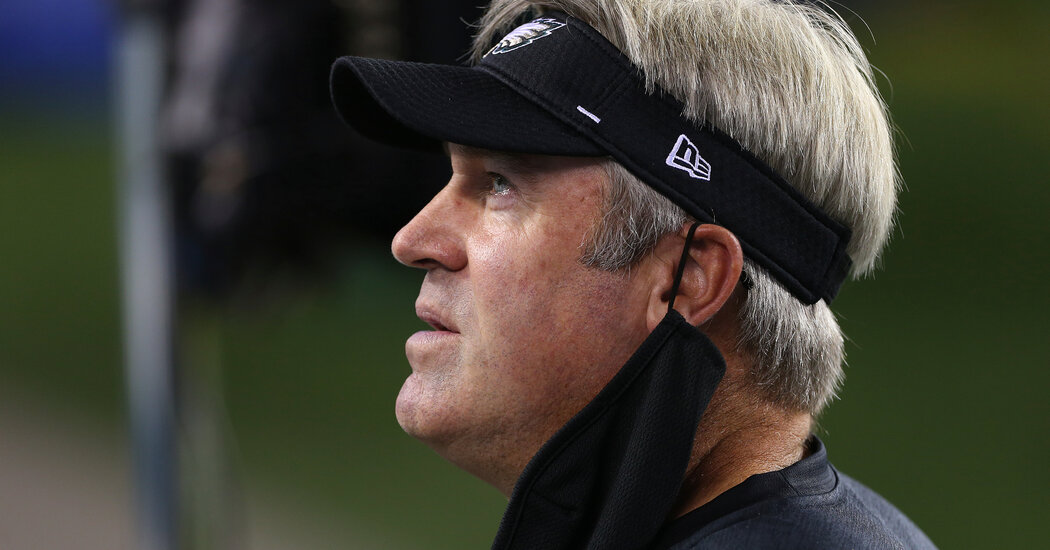 In a prelude to what could be a tumultuous off-season in Philadelphia, the Eagles on Monday fired their coach, Doug Pederson, less than three years after he led the team to its first Super Bowl championship.

Pederson presided over playoff teams in three of the past four seasons, but the Eagles capsized in 2020, going 4-11-1 in a dreadful N.F.C. East as their franchise quarterback, Carson Wentz, stagnated, and their offense lacked imagination and identity. The Eagles finished 26th in points and tied for 24th in yardage.

The capstone to the Eagles’ free fall came in Week 17, when Pederson created an uproar by replacing the rookie starter Jalen Hurts with Nate Sudfeld in the fourth quarter against Washington, which needed a victory to clinch the division title and led by 3 points at the time. The move confused, if not unsettled, players, who thought Hurts offered a better chance of winning and who also weren’t considering the effect of the outcome on the team’s draft positioning.

Pederson met with the team’s owner, Jeffrey Lurie, after the regular season ended, and again on Monday. In a statement, Lurie indicated that they did not share the same “collective vision” for revitalizing the franchise, a phrase that almost certainly refers to both his coaching staff and the organization’s future at quarterback.

Pederson was facing a significant overhaul of his staff after defensive coordinator Jim Schwartz announced last week he’d be taking a year off and at least two offensive coaches — Rich Scangarello and Marty Mornhinweg — were reportedly told they would not return.

“We all look forward to the day he will be inducted into the Eagles Hall of Fame as a Super Bowl-winning head coach, and we are confident that he will have success with his next team,” Lurie said. “But as the leader of this organization, it is imperative for me to do what I believe is best for everyone as we look ahead to the future and move into our next chapter.”

In five seasons with Philadelphia, Pederson went 46-39-1, including postseason totals. A former Eagles quarterback, he left his offensive coordinator post in Kansas City to become Philadelphia’s coach in January 2016, three months before the team drafted Wentz with the second overall pick.

Overseeing his development, Pederson helped coax an exceptional season in 2017 from Wentz, who tore a knee ligament in Week 14 and then watched the backup Nick Foles beat New England in the Super Bowl in February 2018. The Pederson-Wentz partnership also produced playoff berths in 2018 and 2019, but Wentz struggled this past season, ranking as one of the league’s worst quarterbacks. After Pederson benched Wentz for Hurts in Week 13 at Green Bay, their relationship reportedly became fractured to an irreversible extent.

Wentz’s regression accelerated Pederson’s downfall, but the Eagles’ talent base has deteriorated every season since the Super Bowl victory. General manager Howie Roseman’s drafting has failed to yield a bounty of production, and without a pipeline of young and healthy players, their roster has aged fast. How Roseman proceeds with Wentz — whose onerous cap charge makes him difficult to trade — will determine the franchise’s course but also his own job security.

The Eagles don’t offer a very appealing a situation to head coaching candidates at present. But Pederson immediately becomes an intriguing candidate for the six teams that currently have coaching vacancies, a group that includes the Jets.

The Jets’ general manager, Joe Douglas, joined Philadelphia’s front office a few months after Pederson was hired and was in Minneapolis for Super Bowl LII when Pederson made the most famous play call in Eagles history — the Philly Special, a gadget touchdown pass from tight end Trey Burton to Foles.

Before that play, Pederson and Foles shared a conversation on the sideline, and that moment was commemorated with a statue outside Lincoln Financial Field. Foles is gone, and as of Monday, Pederson is, too.