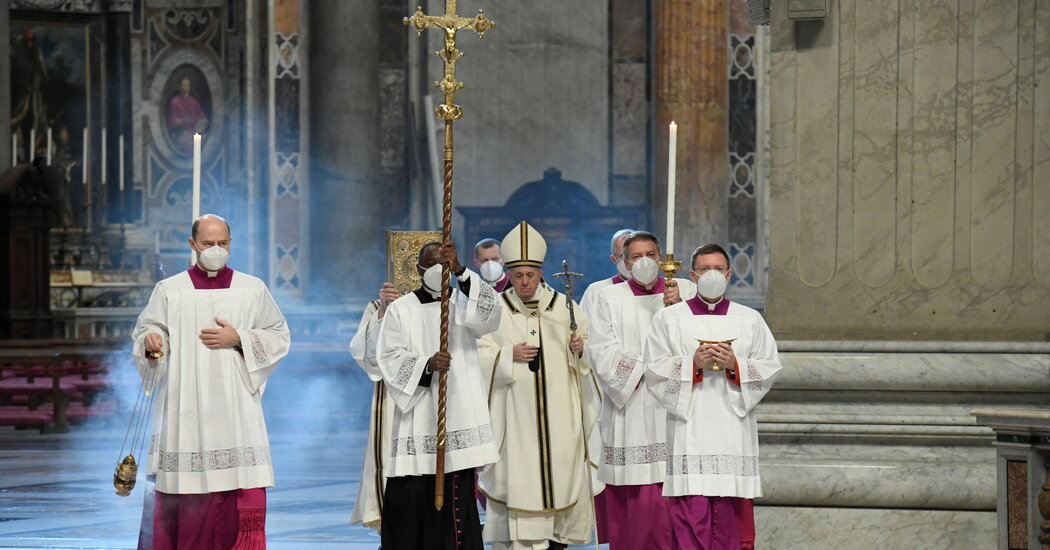 ROME — Pope Francis has changed the laws of the Roman Catholic church to formally allow women to give readings from the Bible during Mass, act as altar servers and distribute communion, but they remain barred from becoming deacons or priests.

In many countries, Catholic women were already carrying out those duties, which are officially reserved for men, but by amending the Code of Canon Law, which lays down the rules of Catholic practices, Francis has removed the possibility that conservative bishops might prohibit women from acceding to these positions.

In a letter accompanying the decree announcing the change, Francis said he wanted to recognize the “precious contribution” that women made to the church, as well as that of lay people.

But the decree, which Francis signed on Sunday, and the Vatican issued on Monday, also makes a distinction between “ordained” ministries — including the priesthood and the diaconate, which are reserved for men — and other ministries open to baptized men and women.

In an online note published by Vatican News, an online portal, the Vatican said the Pope wanted to make clear that “what is under discussion are lay ministries, ‘fundamentally distinct from the ordained ministry that is received through the sacrament of holy orders.’”

The decree in itself “is not a radical shift,” said Kate McElwee, executive director of the Women’s Ordination Conference, which fights for gender equality in the church, including the right for women to become priests. “But the church recognizing widely accepted practices by Catholics around the world and taking the steps to be more inclusive is a radical thing,” she added.

The change probably won’t affect many Catholics, especially in developed countries, where women have been serving in these roles for years, she said. “But in communities that use church practice and the way that they treat women as a way to discriminate or defend oppressive practices in society, this could be a step — albeit small — toward greater equality for women,” she said.

The church hierarchy, including Pope Francis, has made it clear in recent decades that ordaining women as priests is not on the table.

Some church historians argue that there is evidence that women served in the role of deacon, an ordained minister, during the Catholic church’s early history. Many people who have been campaigning for women to play a greater role in the church today have said that allowing them to become deacons would be an important step.

Francis has created two panels to examine the role of women in the early church. The first did not reach consensus.

After a 2019 meeting at the Vatican, Francis issued a papal letter that said women should have more formal roles in the church. The meeting also discussed the role of women in far-flung corners of the world, like the Amazon, where a shortage of priests has meant that women already carry out many pastoral responsibilities. But in the letter, Francis resisted moving women up in the hierarchy.

The Vatican said in a note on Monday that after that meeting, “Pope Francis wanted to formalize and institutionalize the presence of women at the altar,” and the new decree was the result.

In a letter published with the change to the law, Francis said the services of reader and altar server “entail stability, public recognition and a commission from the bishop.”

These services “allow women to have a real and effective impact on the organization, the most important decisions and the direction of communities, while continuing to do so in a way that reflects their womanhood,” Francis added, citing the letter that followed the 2019 meeting.

For Lucetta Scaraffia, a church historian and feminist, the pope’s new decree effectively closes the door on women becoming deacons.

“There is nothing new in the decree — it effectively recognizes the roles that many women have been doing for decades, only now they will be controlled by a bishop,” Ms. Scaraffia said in a telephone interview.

“It seems as though the pope is conceding something to women, but it is something that they’ve had for decades, while denying what they have requested, the diaconate,” she said.

Phyllis Zagano, a senior research associate at Hofstra University and an expert on female deacons, said she saw the opening as a path toward the diaconate. The roles of reader and altar server were once steps on the path to priestly ordination, she said.

“Now we have women installed to what was a minor order,” she said. “That’s a big deal. He’s making it legal.”

She added, “The end result is recognition that women are equally human to males.”