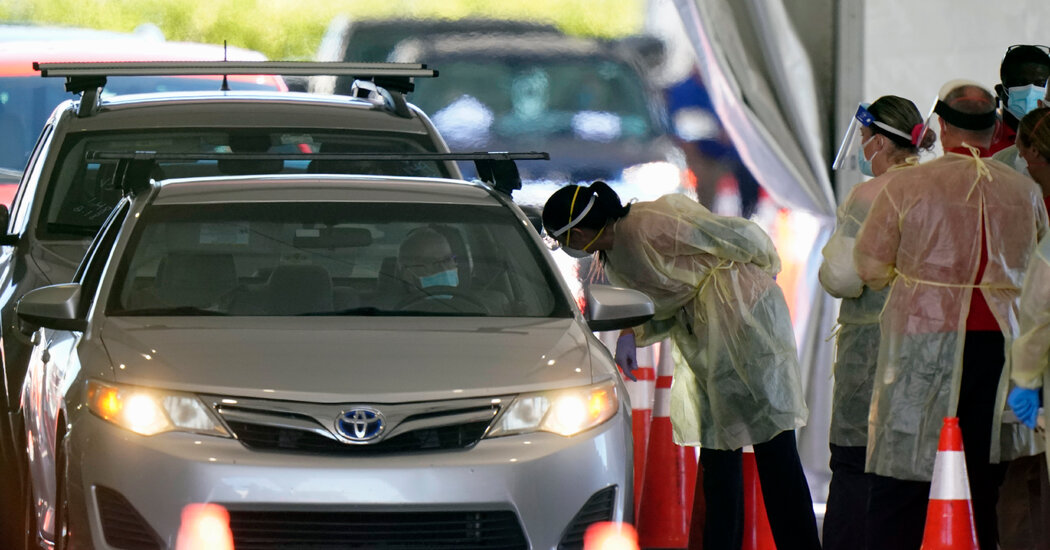 The east parking lot at Hard Rock Stadium has been a virus testing facility since March, closing for games for the N.F.L.’s Miami Dolphins and the University of Miami football teams. It also shut down for the Orange Bowl, though it is typically open seven days a week.

Now, it is pausing virus testing and vaccinations on Monday to make way for the College Football Playoff title game between Alabama and Ohio State.

The stadium became a drive-through vaccination site on Friday, as announced by Gov. Ron DeSantis of Florida last week. On Sunday, Florida health officials reminded people of the pause on Twitter, sparking an uproar that the state was again prioritizing money over public health.

“Maybe you close it a little early,” Governor DeSantis said of the facility for Monday’s game at a news conference Wednesday. “But I think you can still do it, even on that day.”

The game is kicking off eight hours after the state shut down the vaccine clinic at noon.

“I would say that the whole season has been a balancing act and the championship game will be one, too,” said Bill Hancock, executive director of the College Football Playoff, adding that he was happy the site was able to offer vaccines and host the game as well.

The number of new cases in Florida, which has been one of the hardest hit by the pandemic recently, increased 58 percent this week compared to two weeks ago, according to a New York Times database. Deaths have increased 44 percent during that same time period. Miami-Dade County, where the College Football Championship is, is the most populous county in Florida and has had the third highest rate of daily cases per 100,000 residents of any county over the past week.

Still, Hard Rock Stadium, in Miami Gardens, planned to welcome upward of 14,000 spectators to watch the championship game. Florida has no travel restrictions, meaning fans could come from all over without quarantining.

Local governments cannot enforce mask mandates, occupancy limits or curfews for their districts, as the governor prohibited them from prescribing penalties to those violating coronavirus recommendations.

The policies in Florida concerning the virus contrasted sharply with California’s handling of fans at the Rose Bowl, which was eventually moved because health officials would not allow fans to attend the game at the urging of football officials.

The Rose Bowl, which moved to Texas, had been held in Pasadena, Calif., every year since its inception, apart from the game following the attack on Pearl Harbor.

State leaders in Florida have operated under the same “re-opening” standards they set in September.

Appointments for vaccines in Miami-Dade, which are available to residents 65 and older, filled up 20 minutes after registration opened on Thursday, the mayor’s office said. Residents from all over the state are scrambling to get the vaccine, as the governor has made it available to a wider range of individuals than most states.

“Getting these vaccines into the community is the best way to protect our most vulnerable and fast-forward us toward the end of this pandemic and the restoration of our economy,” Miami-Dade County Mayor Daniella Levine Cava said.

Though Hard Rock Stadium will be at 20 percent capacity with rules in place about physical distancing and wearing masks, television footage from the Rose Bowl and Sugar Bowl — which had similar rules — showed clusters of unmasked fans.