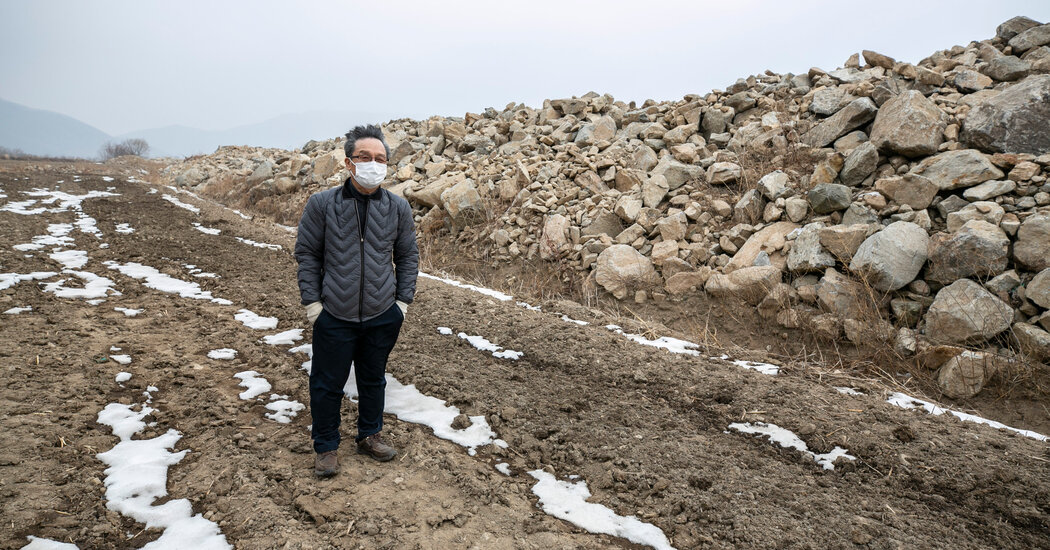 HAEAN, South Korea — Along the border with North Korea is a town where the sad legacy of war is perhaps best understood by looking at the crops in the field.

Standing on a wind-swept plot on a hillside, Han Gi-taek, 69, peered over the land and recalled the hard labor, cold nights and stray land mines that made it difficult for his family to cultivate the ground beneath his feet. First they did it with their bare hands and shovels, he said. In more recent years, it has been done using tractors, with the piles of rocks that ring the field bearing witness to the family’s decades of labor.

Mr. Han arrived in this mountain basin on the eastern border with North Korea in 1956, when military trucks unloaded 160 families as new settlers of the war-torn territory. The families, mostly from Korean War refugee camps, were told by the government in the South that they would be allowed to keep the land if they cultivated it for 10 years.

“We were landless peasants who lost everything during the war,” Mr. Han said. “We came here with a dream of owning our own land.”

When the first families arrived, they saw nothing but wilderness. The nearest bus stop was seven miles away. The winding dirt road to this former battleground was studded with checkpoints where armed sentries stopped anyone traveling without a military-issued pass. A dusk-to-sunrise curfew was enforced, and the families had to live in tents for months before the army built them wood-and-mud huts.

Now this five-mile-wide basin, ​better known by its wartime nickname, “Punch Bowl​,” grows ginseng, apples and radish greens that are shipped to cities across South Korea. The military passes and checkpoints are long gone. This year, the South Korean government will finally deliver on its promise to the settlers, more than six decades after it began to repopulate Haean’s ravaged landscape after the war

The holdup was caused by a thorny legal issue. After Korea was liberated from Japanese colonial rule at the end of World War II, ​the United States and the Soviet Union divided it into two halves. Haean fell to North Korea.

During the Korean War​, American-led United Nations forces waged some of their fiercest battles in hills surrounding Haean. Thousands of United States, South and North Korean troops died in the area. When ​guns fell silent in a truce in 1953, Haean was in South Korea’s hands.

The government soon began repopulating the hard-won territory, allotting plots of land that had been abandoned during the violence to the new settlers. Eighty percent of the original landowners were in the North. The rest were in the South.

That question has blocked the government from keeping its promise to the settlers for decades.

“On one hand, we had to protect the rights of original ​residents who were evacuated to the North during the war and still cannot return home,” said Jeon Hyun-heui, chairwoman of the Anti-Corruption and Civil Rights Commission, which oversees the government’s efforts to resolve the dispute. “On the other hand, we also have to protect postwar settlers who believed in their government’s promise and have devoted their lives to turning the abandoned wilderness into fertile farmland.”

“The problem in Haean is a tragedy created by the division of Korea and the war,” Ms. Jeon said.

By its Constitution, South Korea must treat the entire Korean Peninsula as its territory and people in the North as its own citizens. While legal scholars and government authorities debated the case, some settlers were forced to pay rents to the original owners or continue to farm on plots technically owned by people in North Korea.

South Korea solved the issue last year by enacting a new law that allowed the government to declare the land in Haean state-owned and sell or lease it to the settlers at special rates, starting this year. The proceeds from the transactions will be saved to compensate the original landowners, should they return home from the North in the remote possibility of reunification.

For the settlers, the deal was long overdue and did not go far enough to recognize the sacrifices that had been made to ensure Haean thrived after the war.

Survival was not guaranteed for those who were among the first to arrive. The winters were unforgiving. Armed commandos from the North posed an ever-present threat. There was no middle school until 1980, and for many children, formal education ended in primary school.

“Some families pulled their stakes up and left,” said Jang Seong-bong, 59, who arrived during the second wave of settlers in the 1970s. “But we were poor and uneducated and had no alternative.” He recalled fetching 16 buckets of water each morning from a frozen stream that was 500 yards away.

Villagers supplemented their hardscrabble income by scavenging the rocky hills for the wreckage of war — empty shells, rusting bullets, anything with metal on it — that they sold for scrap metal. ​Twenty-one settlers have been killed and 14 others crippled by exploding land mines in the hills of Haean. One woman lost a leg, a son and a grandson.

“I was kicked out of hospital in the nearest town after two weeks because my family could not pay bills,” said Seo Jeong-ho, 66, who lost his right eye, left hand and most of the fingers off his right hand in a land mine ​explosion ​in 1967.

Today, Haean has become a destination for so-called national security ​tourists who are fascinated by its war history. Tourists gaze at North Korea from Ulchi Observation Post, or descend into Invasion Tunnel No. 4, which North Korea dug beneath the border.

Just as these landmarks remind visitors of the dangers still posed by North Korea, the Punch Bowl villagers’ decades-old struggle for land has become a symbol of the war’s unfinished business.

Highways and tunnels connect nearby cities to the sleepy town with 1,300 people. ​Ginseng hibernates under neat rows of black plastic shades. At its war memorial, the flags of the United States and 15 other nations that fought for South Korea flap in the wind.

It wasn’t until 2016, when Moon Jae-in, ​who would become president the next year, visited Haean and listened to the villagers’ grievances that the land issue was taken up by South Korea.

Under the new law, the government and the settlers are negotiating how much the settlers should pay for the land now that it has been ​turned into state property. Since the government’s original promise was never recorded, officials could find no legal ground to give the land for free, said Jeong Dong-rule, an official from the civil rights commission.

Settlers have insisted ​the government offer them cheap prices that can be paid over many years. ​Otherwise, they fear they will lose the land for good. ​

“They didn’t lift a single stone for us when we cultivated the land, and now they are telling us to buy it from them,” Mr. Han said. “If we have to borrow to do so, we fear that we will eventually lose the land to rich people from big cities.”