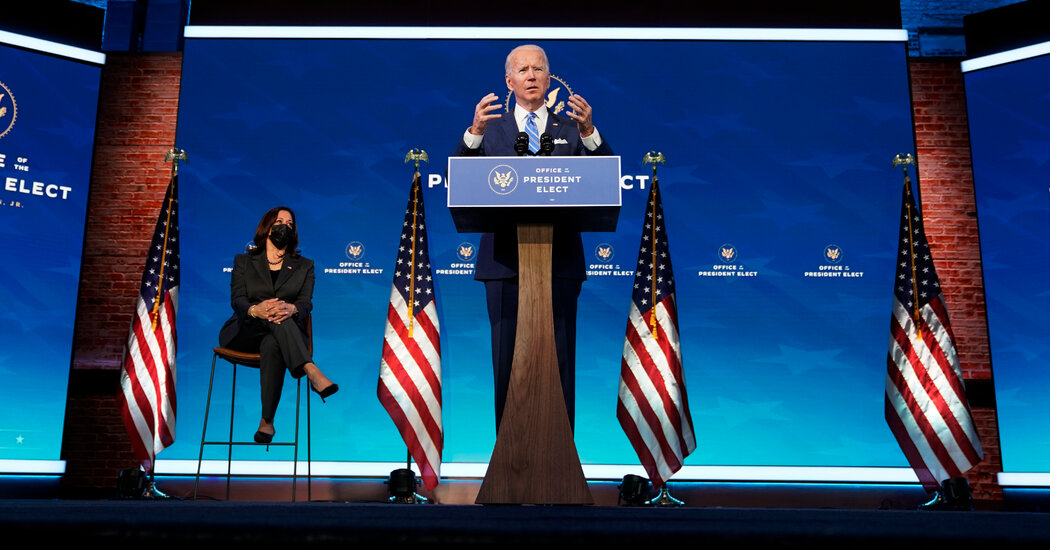 Good morning. Joe Biden unveils his plan to defeat the virus and fix the economy.

Never let a good crisis go to waste. A version of that line has been variously attributed to Winston Churchill, Rahm Emanuel and others, and the idea is simple enough: A short-term crisis often creates the opportunity to solve long-term problems.

The Great Recession of a dozen years ago handed Democrats control of the federal government, which they used to expand health insurance to millions of Americans, after having failed at that goal for decades. The problem for Democrats was that voters didn’t reward the ambition. Less than a year after President Barack Obama signed the bill, Republicans retook House control, constraining the rest of Obama’s agenda.

Now, President-elect Joe Biden is preparing to take office during a new time of crisis. And like his former boss, Biden has big ambitions for fixing the country’s problems. But he is pursuing a different strategy than Obama did.

Biden’s speech last night, laying out a $1.9 trillion economic plan, made that clear. His agenda will remain more tightly linked to the immediate crisis than Obama’s. Although Obama also began his presidency with a huge stimulus bill, he soon pivoted to health care and climate change, which had only tenuous connections to the housing meltdown that led to the recession. Biden shows no sign of pivoting to anything so removed from the coronavirus.

“During this pandemic, millions of Americans, through no fault of their own, have lost the dignity and respect that comes with a job and a paycheck,” Biden said last night in Wilmington, Del. “The very health of our nation is at stake.”

The Biden approach has clear advantages. It allows him to tell a consistent story about trying to defeat the virus, restart the economy and open schools. It may also increase his chances of achieving those goals. Obama did not remain so focused on the economy, and it was still struggling during the 2010 midterm campaign. Democrats suffered as a result.

(Biden’s team is already thinking about how to avoid a midterm defeat in 2022, Politico has reported.)

But Biden’s strategy also comes with risk. The country really does face big problems that are broader than the virus, including climate change, economic inequality and political dysfunction.

Biden and his team hope to address these by connecting them to the economy’s recovery. He is already planning a second piece of legislation that will include spending on clean-energy and infrastructure programs to put people back to work and tax increases on the wealthy to reduce the deficit. Biden’s larger agenda is called “Build Back Better” — a reference to the pandemic.

The model is Franklin D. Roosevelt. Biden won’t come close to the scale of New Deal change, given his slim congressional majorities, but the general idea is still the same. Roosevelt resuscitated the economy while remaking the U.S. economy, through Social Security, minimum wages, Wall Street regulation, stronger labor unions and the construction of roads, bridges and buildings.

As Noah Smith of Bloomberg Opinion wrote this week, “A crisis does present an opportunity for long-term reforms, but it’s best to use that opportunity for reforms that address the immediate crisis.”

Of course, it’s also possible that Biden will succeed at fighting the pandemic but fail to pass anything as lasting as Obama’s health care bill, let alone the New Deal.

For more: The Biden plan includes checks for most households; expanded jobless benefits and rental assistance; money to accelerate vaccinations and reopen schools; and a paid sick-leave program to encourage people to stay home when they’re ill. The Times’s Jeanna Smialek has more details.

From Opinion: “The slow but steady improvement for working women appears to have ground to a halt,” the economist Diane Coyle writes.

Lives Lived: Siegfried Fischbacher, half of the German-born magician team Siegfried & Roy, captivated Las Vegas audiences with performances alongside big cats, elephants and other exotic animals. Fischbacher died at 81, eight months after the death of his partner, Roy Horn.

What are New Yorkers doing inside those canvas yurts pictured above?

Who are the two presidents before Trump to have been impeached?

Why did a British truck driver have his ham sandwich confiscated?

And which college football team is the last one from a blue state to win the national championship?

Today is Friday, and that means it’s time for our weekly 11-question News Quiz, which lets you see how well you stack up against other Times readers (and have some fun along the way, we hope). We encourage you to take the quiz.

We also invite you to submit your own suggested question for next week’s quiz. This week, that clever question combining college football and politics came from a reader of The Morning. Once you complete the quiz, you’ll find a link at the bottom that will you let you submit a question. And good luck!

F. Scott Fitzgerald’s classic novel “The Great Gatsby” is now in the public domain, meaning writers can mine the characters and plot for their own purposes without having to ask permission. Expect new adaptations — including a graphic novel and a zombie version.

The late-night hosts joked about Rudy Giuliani. (He is one of the few people still willing to join Trump in the foxhole, our colleagues Katie Rogers and Maggie Haberman write.)

The pangram from yesterday’s Spelling Bee was hayfork Today’s puzzle is above — or you can play online if you have a Games subscription.

Thanks for spending part of your morning with The Times. See you Monday. — David

P.S. A hidden haiku in The Times, recently spotted by @nythaikus: “The role of the friend / is to be present, patient / and compassionate.”

On today’s episode of “The Daily” a House Republican explains why he voted to impeach Trump. On “The Argument,” will Trump’s second impeachment change minds?