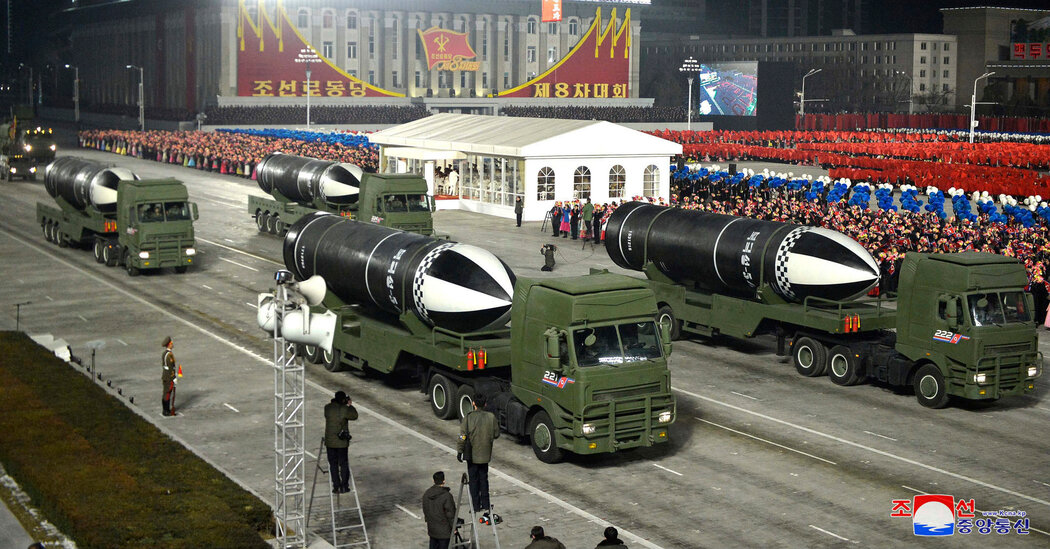 To the Kim regime, the nighttime military parades in Pyongyang, the capital, were demonstrations of power meant to boost domestic morale amid crippling economic sanctions. To the Biden administration, they foreshadow what could become the incoming president’s greatest foreign policy challenge.

The timing of the two flashy exhibitions has drawn attention to the diplomatic freeze between the two countries. In North Korea, Mr. Biden is inheriting a rival whose nuclear ambition is bolder and more dangerous than it was four years ago, when President Barack Obama left office.

The parades underscored that North Korea has been silently ramping up its nuclear capability for years, even as President Trump claimed that his top-down, personality-driven diplomacy with Mr. Kim meant the North was “no longer a nuclear threat.”

“If anything, the North’s nuclear threat has only grown,” said Yun Duk-min, a former chancellor of the Korea National Diplomatic Academy in Seoul. “The military parade is evidence.”

This week’s parade came at the end of the eight-day congress held by North Korea’s ruling Workers’ Party, which was closely monitored by outside analysts for clues to how Mr. Kim might recalibrate his policy toward Washington.

Mr. Kim used the congress to celebrate the North’s nuclear arsenal as one of ​his proudest achievements, and to apologize to his people for the deepening economic woes caused by the pandemic and the devastating international sanctions imposed since the country’s fourth nuclear test in 2016.

Mr. Kim’s historic summits with Mr. Trump in Singapore and Vietnam failed to end those sanctions. With his back against the wall and diplomacy with the United States at a standstill, some experts warn that Mr. Kim may return to testing missiles to bring Washington back to the negotiating table with more attractive proposals.

North Korea has a history of retreating deeper into isolation and raising tensions to strengthen its leverage when negotiations do not lead to concessions, or when a new American president takes office.

“North Korea leaves little doubt about its intentions: It wanted to be treated as an equal in nuclear arms reduction talks with the United States,” said Cheon Seong-whun, a former director of the Korea Institute for National Unification, a think tank in Seoul.

“The new weapons disclosed during two parades have never been tested before and we don’t know whether they are actually working,” Mr. Cheon said. “But we know in what direction North Korea is headed.”

The earlier parade, held on Oct. 10 to mark a party anniversary, unveiled what appeared to be the largest intercontinental ballistic missile the North had ever built. It also featured a Pukguksong-4, a new version of a submarine-launched ballistic missile, or SLBM. Neither weapon has been tested.

The SLBM displayed during the parade on Thursday look​ed like yet another upgraded, untested version of the one North Korea has been developing under Mr. Kim, along with its Hwasong land-based intercontinental ballistic missiles.

North Korea tested three Hwasong ICBMs in 2017. After the last such test, it claimed that it could now target the continental United States with a nuclear warhead.

Images of this week’s parade released through state media showed Mr. Kim proudly observing the neat columns of missiles, rockets, tanks and goose-stepping soldiers marching across the main plaza in Pyongyang, named after his grandfather, the North’s founder, Kim Il-sung.

The parade also featured fireworks and military planes firing flares in the night sky as crowds of people danced at the plaza, state media reported on Friday.

Kim Jong-un has vowed to strengthen the North’s nuclear deterrent ​since his talks with Mr. Trump stalled​ in 2019​. And as the economy continues to deteriorate, his bargaining opportunities are limited.

“The armed forces of the Republic will strictly contain any military threats in the region of the Korean Peninsula and preemptively use the strongest offensive power to thoroughly smash the hostile forces if they jeopardize the security of our state even a bit,” Defense Minister Kim Jong-gwan of North Korea was quoted as saying during the parade. (He was referring to the North, whose formal name is the Democratic People’s Republic of Korea.)

At the party congress, Mr. Kim made it clear that the steep economic challenges facing the North would not affect his weapons program. He called his nuclear arsenal the greatest achievement “in the history of the Korean nation” and vowed to “further strengthen our nuclear deterrence.”

He also offered an unusually detailed wish list of weapons, from “hypersonic gliding-flight warheads” and military reconnaissance satellites to “ultramodern tactical nuclear weapons,” which have become a growing concern for the United States and allies in the region, including South Korea and Japan.

North Korea has seen its nuclear force as the best tool for ensuring the continuity of the Kim family’s dynastic rule, and as a bargaining chip to extract economic and other concessions from the United States. During the party congress, Mr. Kim claimed that his nuclear weapons had made North Korea safer from American threats, putting it in a better position to rebuild its economy.

His hardening stance reflects “deep rage and disappointment” after his failed negotiations with Mr. Trump, said Lee Byong-chul, a North Korea expert at the Institute for Far Eastern Studies at Kyungnam University in South Korea.

The government of South Korea’s president, Moon Jae-in, helped to arrange the Trump-Kim summits, which were centered on cultivating personal trust between the two leaders with the hope of reaching a breakthrough. Mr. Trump wanted a nuclear-free peninsula, and Mr. Kim wanted an end to the sanctions. Their meetings went nowhere, though North Korea has since refrained from major provocations as it waited out the confusion of the American presidential election.

The election is now over, but chaos has only deepened in the United States, and Mr. Kim’s patience may be running thin. “We can expect him to raise tensions depending on whether and how Biden responds,” said Mr. Lee.