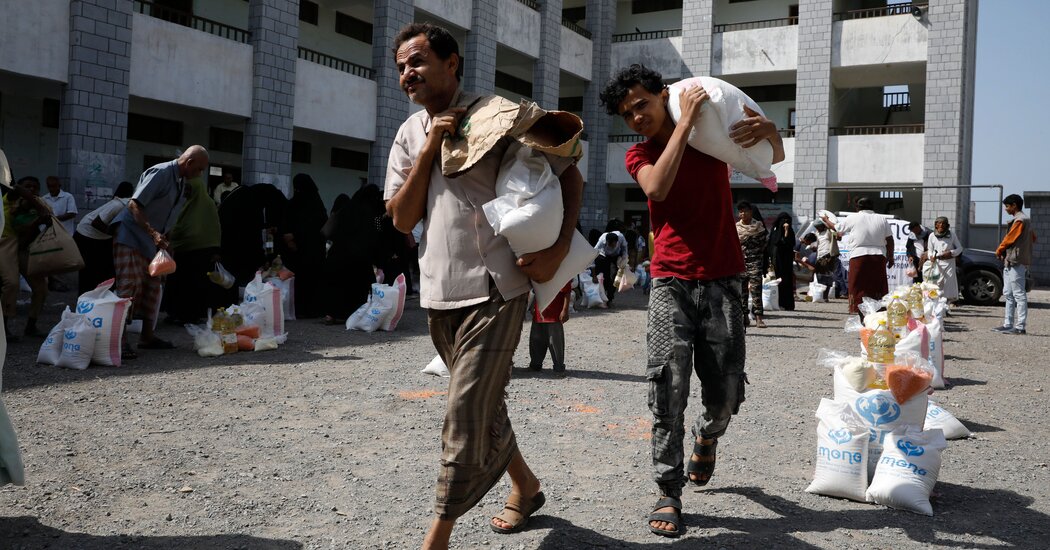 Warning that Yemen could be consumed by a large-scale famine, top relief officials at the United Nations implored the United States on Thursday to scrap its blacklisting of Yemen’s Houthi insurgent group, arguing that the move could effectively sever food deliveries to a country where millions already face the threat of starvation.

The warning, made at a Security Council briefing on the six-year-old war ravaging Yemen, came four days after Secretary of State Mike Pompeo, in one of his final acts as the top diplomat of the Trump administration, said he was classifying the Houthis as a foreign terrorist organization.

Fears have grown that such a designation, which takes effect on Jan. 19, could put both aid groups and commercial providers at risk of American legal penalties for engagement with the Houthis, who control large swaths of Yemen, including major points of entry.

Although Mr. Pompeo said exemptions would be granted to avoid aid disruptions, international humanitarian organizations have said the designation and the bureaucratic entanglements of seeking exemptions would still exert a chilling effect — an outcome that United Nations officials fear as well.

Mark Lowcock, the emergency relief coordinator for the United Nations, said he was not challenging the intent of the U.S. designation of the Houthis but was responding to three questions raised by such a step.

“First, what is the likely humanitarian impact? The answer is a large-scale famine on a scale that we have not seen for nearly 40 years,” Mr. Lowcock told Security Council members. “Second, would licenses and exemptions for aid agencies prevent that? The answer is no,” he said. “Third, well, what would prevent it? A reversal of the decision.”

David M. Beasley, executive director of the World Food Program, the anti-hunger agency of the United Nations which won the 2020 Nobel Peace Prize, was more blunt in his comments, telling Security Council diplomats the designation amounted to “a death sentence to hundreds of thousands, if not millions of innocent people in Yemen.”

Both officials described a drastic need for increased funding of humanitarian aid to Yemen, the Arab world’s poorest country, where 80 percent of the population of roughly 30 million is in need of outside assistance in large part because of the war.

“Already, about 50,000 people are essentially starving to death in what is essentially a small famine,” Mr. Lowcock said. “Another 5 million are just one step behind them.”

The Yemen conflict began in 2015 after the Houthis routed the government backed by neighboring Saudi Arabia, which responded with a military campaign of aerial assaults that has devastated much of the country. The Saudis view the Houthis as proxies of Iran, Saudi Arabia’s regional adversary.

But the war has turned into a disastrous quagmire for Saudi Arabia’s de facto ruler, Crown Prince Mohammed bin Salman, who has been a strong ally of the Trump administration. Prospects for a political settlement remain remote.

Richard M. Mills, the deputy U.S. ambassador to the United Nations, said in his response that the warnings from Mr. Lowcock and Mr. Beasley were “informing how we approach the designation implementation, and we are listening.” Still, Mr. Mills said, “we do believe that this step is the right move forward to send the right signal if we want the political process to move forward.”

The designation takes effect a day before the inauguration of President-elect Joseph R. Biden Jr. While he has promised to undo or reverse many of the current administration’s foreign policy actions, Mr. Biden’s intentions regarding the Houthi designation are unclear.

Asked whether the message of the U.N. aid officials had been intended for Mr. Biden, the chief U.N. spokesman, Stéphane Dujarric, said: “These appeals are being made in public. I have no doubt they’re being heard.”