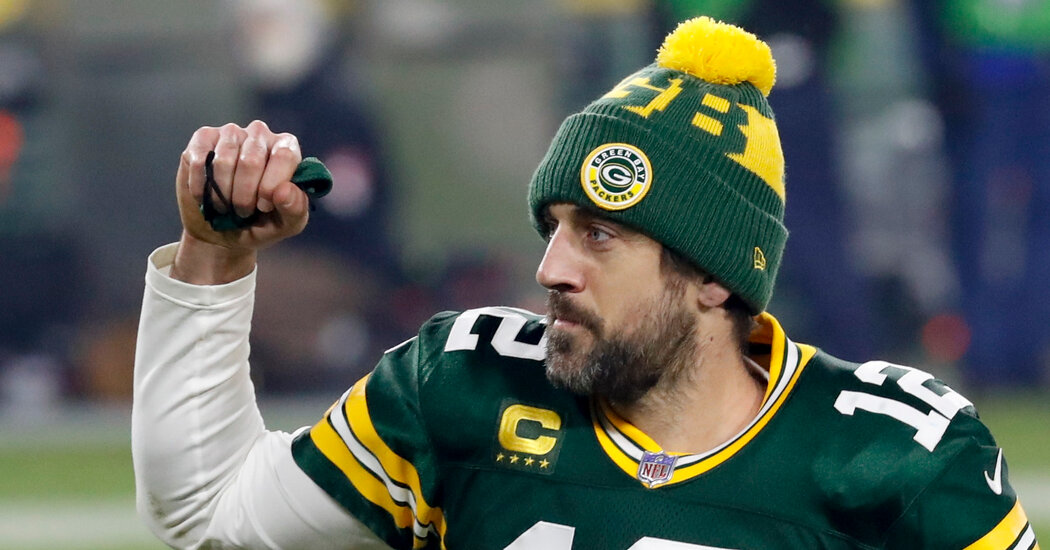 There was not a lot of focus on the Green Bay offensive line in the buildup to the Packers’ divisional playoff game against the Los Angeles Rams on Saturday. The attention was understandably elsewhere: Green Bay quarterback Aaron Rodgers is a top candidate for the N.F.L. Most Valuable Player Award, and the Rams had the league’s leading defensive unit featuring dominant defensive tackle Aaron Donald.

But hobbled by an injury to his ribs, Donald was frequently sidelined Saturday and would make only one tackle in the game. While Rodgers had another patient and skillful postseason performance that included two touchdown passes, it was the Green Bay rushing attack — powered by the authoritative push of its offensive line — that led the way to a steady 32-18 victory.

“They were the stars of the game tonight,” Rodgers said of his offensive linemen. “They dominated.”

The Packers, who rushed for 188 yards and logged 484 total yards, advance to the N.F.C. championship game next weekend at Green Bay’s Lambeau Field against the winner of Sunday’s game between the Tampa Bay Buccaneers and the New Orleans Saints. It will be Rodgers’s fifth N.F.C. title game appearance but his first at home in Green Bay.

Saturday was the first time this season that the Packers had hosted spectators for a home game and roughly 8,500 fans, which included families of team employees, flocked to Lambeau Field. Rodgers said he was hoping for an even bigger crowd next weekend.

“It was a joy to see them,” Rodgers said of the Packers faithful. Looking forward to their return for the first N.F.C. championship game in Green Bay since 2008, Rodgers added: “It means a lot. Got me emotional with the crowd out there today.”

Green Bay running back Aaron Jones had 99 rushing yards on 14 carries, including a backbreaking 60-yard dash on the Packers’ first play of the second half. When Jones ended that Packers possession with a 1-yard touchdown run, it stalled a brief rally the Rams had mounted in the second quarter.

The Packers had taken a 19-10 first half lead on two Mason Crosby field goals, a nifty, scrambling 1-yard touchdown run by Rodgers and a 1-yard touchdown pass from Rodgers, who completed 23 of 36 passes for 296 yards, to wide receiver Davante Adams, who caught nine passes for 66 yards.

Los Angeles rallied to make a third-quarter run at the Packers. Rams quarterback Jared Goff, who completed 21 of 27 passes for 174 yards and one touchdown, had seemed out of sync to that point. Perhaps it was because he was without one of his top receiving targets, Cooper Kupp, who missed the game with a knee injury. But to start the second half, Goff completed six consecutive passes for 51 yards.

The Rams then went back to the rushing attack, and on a first-and-goal from the Packers’ 7-yard line, running back Cam Akers took a direct snap and bulled into the end zone. The Packers’ lead was trimmed to seven points.

But Jones and Rodgers were not deterred.

After pounding the middle of the Rams defensive line with running plays for much of one possession, Rodgers audibled at the line of scrimmage on a second down to call a deep pass to wide receiver Allen Lazard. Rodgers began the play with a backfield play-action fake and then connected with Lazard, who split two defenders and caught a perfectly placed ball in the open field for a 58-yard touchdown.

The score put the Packers ahead, 32-18, with under seven minutes remaining. The Rams did not get past the Green Bay 47-yard line in the game’s closing minutes.