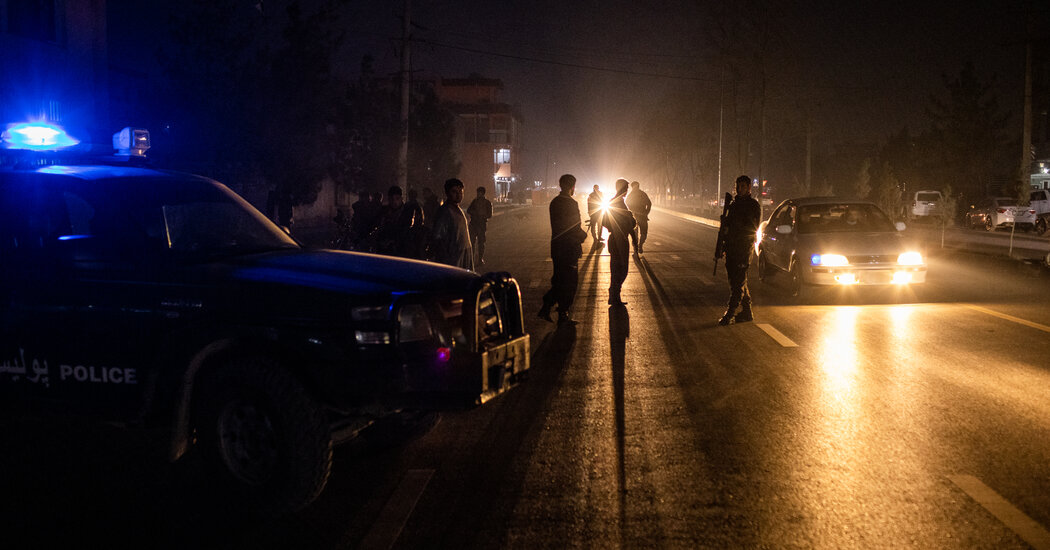 KABUL, Afghanistan — In Kabul’s uncertain present, fear and dread intertwine in a vise. Fear has become a way of life.

“When you’re in the car you feel fear, when you are walking you feel fear, and when you are in the shop you feel fear,” said Shamsullah Amini, a 22-year-old shopkeeper, while watching over his vats of dried grains and beans in the Taimani neighborhood. “If there was any security at all, we wouldn’t all be thinking about leaving the country.”

“Fear is omnipresent,” said Muqaddesa Yourish, an executive at a leading communications firm. “It’s gone from a state of fear to a state of being.”

Fear has long been part of life in Kabul, with the possibility of sudden death from a Taliban strike. But these days — even as the Afghan government tries to negotiate peace with the Taliban — there is a heightened sense that life is fragile here. With the Taliban active in most of the country and almost daily reports of government forces beaten back, there are new questions about whether a grim return to extremist rule is on the near horizon.

On Sunday morning gunmen killed two female judges on a street in a central Kabul neighborhood. The women worked for Afghanistan’s Supreme Court. Shaharzad Akbar, the chairwoman of the Afghanistan Independent Human Rights Commission, wrote on Twitter afterward that the country is suffering “what seems to be a systematic massacre & the world seems to be just watching.”

In the first two weeks of January, bombs went off in several Kabul neighborhoods; a car bomb killed a government spokesman and two others; and a police officer, a military pilot, a soldier and a member of Afghanistan’s intelligence agency were all gunned down, according to a New York Times report. The list is not exhaustive.

“Right now, I can’t be sure of my own security,” said Omar Sadr, a political scientist at the American University of Afghanistan. “But it’s not just about being targeted. It’s about an atmosphere of fear. If it continues, you won’t have the space needed for a democracy.”

The assassination campaign, aimed mostly at government workers, activists, journalists and members of the military, is thought to be the Taliban’s attempt to pressure the Afghan government during the halting peace talks, though the group has denied responsibility for the attacks.

It is also a means of silencing critical voices, now and in the future. More than 300 people were killed in targeted attacks last year, including at least six journalists over the last seven months, according to a New York Times tally.

Some who are able to get visas have left.

“It is pretty morose,” said Farahnaz Forotan, a leading television journalist, who fled to Paris in November after her name turned up on a hit list.

In the capital, a veneer of normality masks the dread. In the early evening, storefronts are brightly lit against the darkened streets, and a frenetic bustle of shoppers and street vendors, darting through the perpetual traffic jam, is undamped by the coronavirus.

But even these last shreds of routine could disappear if the Taliban return or Afghanistan descends again into civil war.

The latest wave of violence evokes memories of the early 1990s strife that destroyed the capital. The internal war has already begun, some here say; the near-daily bombings and shootings, many unclaimed, foreshadow it. At night, the occasional burst of automatic gunfire has become familiar.

“There is no safe area,” said Mina Rezaee, who runs the Simple Café in the bustling Karte Seh neighborhood, packed with inexpensive clothing stores. “People are killed at the mosque, they are killed in the street, they are killed at work. And this is something that’s always with me.”

Portraits of Simone de Beauvoir, Hannah Arendt and Virginia Woolf hang on one of the cafe’s walls next to a quotation from Michel Foucault about love and sensuality.

How many explosions has Ms. Rezaee witnessed up close? “It’s common for me,” she shrugged, noting that she was near a massive truck bombing outside the German Embassy that killed 90 in 2017. In a photograph on her Facebook page, taken after the 2016 Islamic State bombing in Kabul that killed over 80, she clutches her hands to a face contorted with anguish.

“Nobody wants to die young,” said Saib Nissar, 25, who runs one of the glassed-in storefront bakeries that dot the capital. “But here in Afghanistan, no one can think of anything but the insecurity.”

The most banal aspects of daily life have become a torment.

“Every morning on the way to work I’m waiting for an explosion,” said Zahra Fayazi, a customer at the Simple Café and a former top national women’s volleyball player who now works at the state electricity company. “If it doesn’t happen in this square, it will happen in the next one.”

“When we get to the office, everyone is talking about the latest explosions,” she said. “I can only breathe again when my daughters return home from school.”

The consequences of the violence are both psychological and practical — especially for the government workers, academics and activists who are the biggest targets.

Ms. Akbar, the chairwoman of the country’s human rights commission, said, “If you are spending your mental energy thinking about how to survive, inevitably all your days are tense and stressful.”

Mr. Sadr, the political scientist, said he sold his car, worried it would be a target. “I’m trying to use taxis instead,” he said. “I’m trying to be cautious and move less.”

He also said he worried about whether something he said would attract unwanted notice from the Taliban. “We’re all cautious about speaking, about the implications of speaking,” he said.

Ms. Yourish, the communications executive, who is also a former deputy minister, said she no longer has a routine. “I change my routes, I change vehicles,” she said. “I need to be on extra alert about my surroundings. You do get these thoughts of, ‘What if this is my last moment?’ It’s like, taking every day as it comes.”

There is little confidence that the government can hold out against the Taliban, either on the battlefield or at the negotiating table. Some here who have met with them say Taliban negotiators don’t hide their contempt for the Afghan government, regarding it as a puppet of the Americans. There is deep unease about what will happen when the last American troops withdraw, tentatively scheduled for May.

“What will they think of our rights, our women’s rights?” said Ms. Rezaee, the cafe owner, who has all the more reason to fear as a member of the ethnic minority most persecuted by the Taliban, the Hazara, like many of her customers.

An Afghan rapper and his musician friends, sitting together at the cafe, were not optimistic. “I sing of a life that doesn’t exist,” Mustafa Saher, 27, raps in his music video.

Mr. Saher put his tattooed arm on the table. “If they see this, they will cut my arm off,” he said. “They say, this is the opposite of Islam.”

After he posted his video online, he received a threatening phone call saying: “What you are doing? It is against Islam. You are an infidel!”

“I am scared of my own people,” Mr. Saher said. “This fear is depressing people and forcing them to isolate themselves,” he said, adding that it had become impossible, already, to hold concerts in many parts of Kabul.

“All we want is freedom, and justice, and maybe a little bit of peace,” he said.