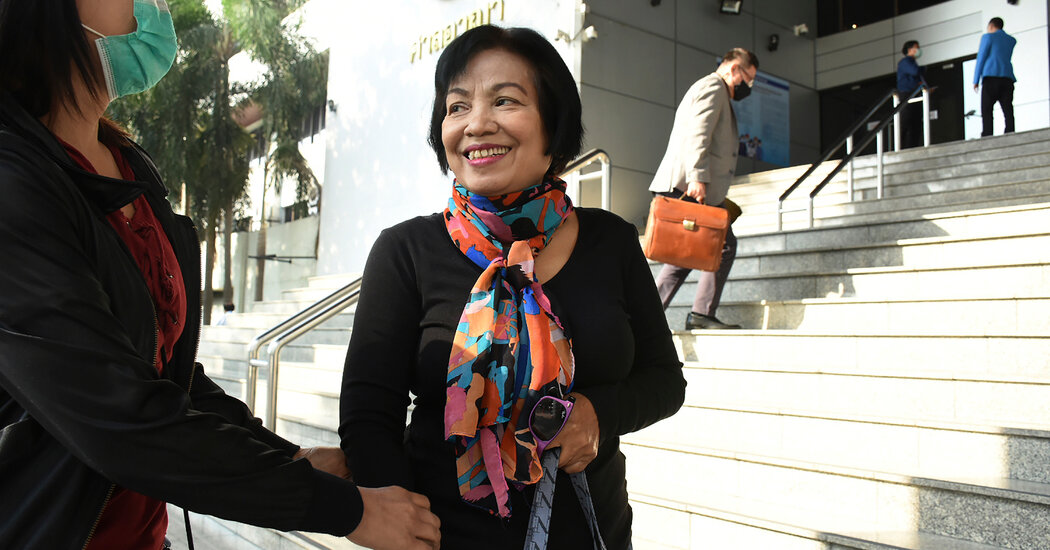 BANGKOK — The onetime civil servant’s crime was to share audio clips on social media that were deemed critical of Thailand’s monarchy. The sentence, handed down on Tuesday by a criminal court in Bangkok, was more than 43 years in prison.

It was the longest sentence yet for violating Thailand’s notoriously tough lèse-majesté law, which makes it a crime to defame senior members of the royal family, according to the group Thai Lawyers for Human Rights. The former civil servant, Anchan Preelert, was sentenced to 87 years, but her prison term was cut in half because she agreed to plead guilty.

“Today’s court verdict is shocking and sends a spine-chilling signal that not only criticisms of the monarchy won’t be tolerated but that they will also be severely punished,” said Sunai Phasuk, a senior researcher on Thailand for Human Rights Watch.

Thailand has seen a spike in lèse-majesté cases since late last year, after more than two years during which Section 112 of the criminal code, which applies to criticism of top royals, was not enforced, according to Thai legal groups. The three-year pause came at the behest of King Maha Vajiralongkorn Bodindradebayavarangkun, who wanted such prosecutions halted, according to Prime Minister Prayuth Chan-ocha.

But that was before a protest movement surged last year, targeting both the king and the prime minister. Protesters, who gathered by the thousands in street rallies, have called for the royal family, one of the world’s wealthiest, to come under the purview of Thailand’s Constitution.

They have demanded scrutiny of the palace’s finances, as the king’s lavish lifestyle has contrasted sharply with the economic pain caused by the pandemic. And they have campaigned for the removal of Mr. Prayuth, a former army general who took power in a 2014 coup, promising to protect the royal family from ill-defined threats.

By last fall, protesters were scribbling graffiti on Bangkok streets denouncing King Maha Vajiralongkorn and his wives and paramours. It was a stunning development in a country where criticism of the monarch had usually been confined to whispers and innuendo, padded with plenty of deniability.

In recent weeks, dozens of Thais, including teenagers and students, have been accused of violating Section 112. With mass student-led protests waning amid an outbreak of the coronavirus in Thailand, human rights groups say the government is using the courts to silence some of the demonstrators.

“It can be seen that Thai authorities are using lèse-majesté prosecution as their last resort measure in response to the youth-led democracy uprising that seeks to curb the king’s powers and keep him within the bound of constitutional rule,” Mr. Sunai said. “Thai authorities are trying to use a sledgehammer to slam this genie back in the bottle.”

Even before the lèse-majesté law was revived in November, other legal mechanisms, including a computer crimes act and a sedition law, were deployed against people deemed to have defamed or insulted top royals. An obscure section of Thailand’s criminal code, making “an act of violence against the queen’s liberty” punishable by life in prison, was enforced for what appeared to be the first time, against protesters who shouted at a royal motorcade.

Section 112 of the criminal code makes insulting or defaming the king or his close relatives an offense punishable by three to 15 years in prison. Each charge is counted separately, which partly explains why Ms. Anchan’s prison sentence is so long.

The case against Ms. Anchan began before the authorities suspended their use of Section 112.

In 2015, the military junta led by then-General Prayuth detained more than a dozen people, including Ms. Anchan, who were accused of being part of an anti-monarchy network. They were charged with using social media to disseminate audio and video recordings seen as critical of then-King Bhumibol Adulyadej, the current king’s father, who was the longest-reigning monarch in the world when he died in 2016.

Bhumibol, who is known as Rama IX, often commuted lengthy lèse-majesté prison sentences. But it is not clear whether his son, who has tightened his grip over the palace’s finances and expanded his military authority, will continue that tradition.

Although some of the people charged along with Ms. Anchan were swiftly sentenced to years in jail by a military court, her case lingered. Ms. Anchan, who had worked at the Thai Revenue Department for about 30 years, was imprisoned from 2015 to 2018 while awaiting trial, according to her legal team.

Pawinee Chumsri, one of Ms. Anchan’s lawyers, said they were planning an appeal. But Ms. Pawinee held out little hope for a decline in such cases anytime soon.

“The government has announced that they are going to impose the lèse-majesté law,” she said. “So I think we will see more and more 112 cases and verdicts because that’s the trend of where the government is going.”