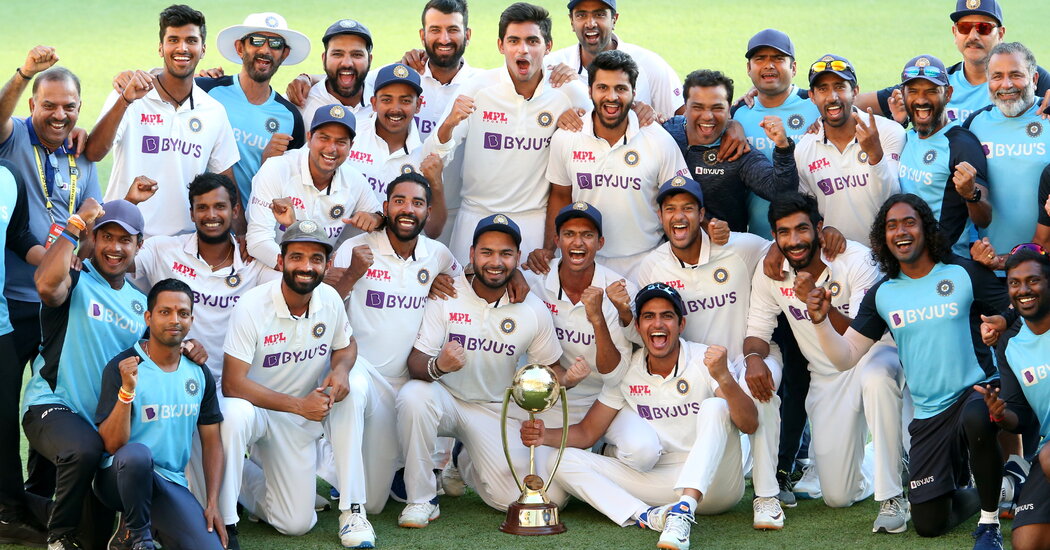 NEW DELHI — Even by the standards of a sport that tests endurance with matches that can go on for five days, India’s cricket team had to draw deep to complete a long tour of Australia that had been complicated by the coronavirus pandemic.

One player missed the funeral of his father to stay on tour, another the birth of his firstborn, a daughter he has yet to see two months on.

But in the end, a young squad without its big-ticket stars, gutted by injuries and deflated by hearing racist abuse from the home crowd, pulled off a rare feat on Tuesday: defeating a confident Australia on its own turf, clinching a four-match series with a victory in Brisbane, at a venue where the hosts had not lost a five-day match in more than 30 years.

The victory was a lift for people across India, where cricket commands an unmatched status as a shared passion in the massive and usually fractious nation. It was a welcome release in a particularly difficult time for India, which has been battered by the Covid-19 pandemic and is reeling from the consequences of a slowing economy.

Fans were glued to their television screens and mobile phones across the country on Tuesday as the fate of the Test series, as the longer multiday version of the game is called, went down to the final moments of the final match. One TV commentator even told viewers that if there was ever a day to call off work with an excuse, this was it. In New Delhi, radio broadcasters could be heard roaring with excitement from cars stuck in the city’s notorious traffic jams.

The win in Australia is being called one of the greatest in India’s cricketing history. In the celebrations, it was clear that to many Indians the sport has also become an important symbol for their nation’s wider ambition of rubbing shoulders with the world’s powers.

“Nothing comes close to this — it surpasses all,” said Ravi Shastri, a former Indian player who is the team’s head coach.

“This is young India at work — give them a stage and move out,” said Harsha Bhogle, a celebrated cricket commentator. “Our generation thinks: Don’t lose. This one inhabits a different world. They see victory, opportunity.”

The win has emphasized the Indian team’s pre-eminence in a game once dominated by the likes of England, the West Indies and Australia, and the country’s position at the center of a sport that has brought its stars plenty of swagger, and big fortunes.

The Indian Premier League, a tournament hosted in India every year around a shorter version of the game where each match lasts about three hours, is one of the world’s most lucrative sporting events, valued at nearly $7 billion in 2019.

The league draws big-ticket players from around the world to play for Indian club teams for high salaries in a glamorous festival of color.

The league has become so central to the sport, and so lucrative, that it went ahead at the peak of the pandemic in September. With the virus spreading fast in India, the organizers moved the tournament to the United Arab Emirates, where it established “bio bubbles” for matches and conducted as many as 30,000 Covid tests. India’s cricket organizing body earned more than $500 million from last year’s tournament, officials told local media.

To secure their series victory in Australia, the Indian team had to bounce back from a humiliating start in which the hosts crushed them in the first game in December. They also had to continue without the services of their regular captain, Virat Kohli, who flew home on paternity leave after the first match, and with several key players ruled out with injuries.

The team that won the final match relied on the hunger of younger substitutes, including Mohammed Siraj, who stayed on the tour despite the death of his father, an auto-rickshaw driver, in November, and T. Natarajan, who missed the birth of his first child.

Emotions were high not just because of fierce competition, but also because of crowd behavior.

This month, Australian authorities launched an investigation after players said fans had heckled them with racist slurs during play, which many described as typical of Australia’s xenophobic sporting culture.

Cricket Australia, the game’s organizing body in the country, has promised to “prosecute the matter to its fullest extent.” But Ben Abbatangelo, a former professional cricketer, said it was difficult for the organizers to truly condemn such behavior for fear of alienating the game’s fan base, which he described as rife with “toxic masculinity” and “nationalism.”

Although coronavirus has been the backdrop to the tour, the matches were able to proceed relatively uninterrupted — apart from the ejection of some misbehaving fans. But the Australian Open tennis tournament, which is supposed to begin in Melbourne on Feb. 8, has been thrown into chaos by a virus outbreak among players.

On Tuesday, Australian health authorities said seven people associated with the tournament had tested positive. Players, forced to quarantine in hotel rooms without access to courts for practice, have also said it will be impossible for them to adequately prepare for the tournament.