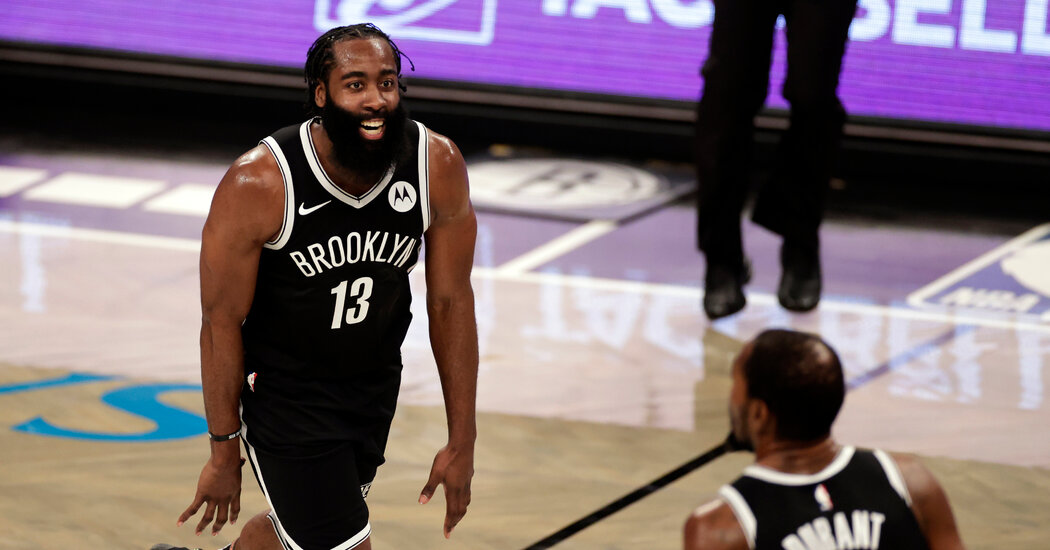 It was a rousing (and welcome) diversion as the N.B.A. strained to play through a pandemic, but a few days of reflection hasn’t changed my initial reaction. Even with so many options, clear winners in this deal do not jump off the scorecard.

The daunting truth for the Nets and the Houston Rockets, who drove this whopper transaction, is that the Cleveland Cavaliers — for now — look best positioned of any team in the quartet to come away satisfied after the Cavaliers paid a modest price to acquire the Nets’ highly rated center Jarrett Allen.

The Indiana Pacers should join them in celebrating the deal, provided that Caris LeVert can return safely from the scary disclosure that he is out indefinitely after a small mass was discovered on his left kidney. The Pacers entered the trade as the fourth team by shipping a potentially expensive free-agent-to-be, Victor Oladipo, to Houston so they could acquire the promising former Nets forward LeVert and his team-friendly contract. Kevin Pritchard, Indiana’s president of basketball operations, said the Pacers are “super confident” about LeVert’s recovery.

Indiana and Cleveland, despite their lesser roles as trade facilitators, got most of the early kudos for the deal. The Nets and Rockets might not care about that, but reservations for the headliners persist because:

It should be noted that there is some scattered praise out there for the Nets and the Rockets that has been drowned out by the conspiracy theories and news media skepticism. One Western Conference executive, for example, chided me for focusing too much on Harden’s various acts of sabotage that fast-tracked his Houston exit and too readily dismissing what his distinct offensive talent can do for the Nets.

Harden got what he wanted in the end after some of the worst trade-forcing behavior ever seen. He showed up late to training camp, flouted the league’s health and safety protocols on camera, let his level of play and conditioning decline and, finally, cemented his newfound villainy by publicly criticizing the collective quality of his now-former Rockets teammates. The executive nonetheless described Harden, if only for the moment while he’s taking such heat, as the league’s most underrated player.

Another executive in the West asked me why I was so quick to scoff at Houston’s return for Harden when the Nets are being openly questioned for possibly trading away too much to get him. Along with the 2022 first-round pick it acquired from Cleveland (via Milwaukee), which the Cavaliers shrewdly tossed into the trade to nab Allen, Houston will receive the Nets’ unprotected first-round picks in 2022, 2024 and 2026, as well as the right to swap first-round picks with the Nets in the 2021, 2023, 2025 and 2027 drafts.

Perhaps one or both of those executives will be proven right. If the Nets win a championship this season or next, or if Houston can construct an enviable new core with its replenished trove of assets, no shortage of scribes like me will face told-you-so recriminations.

You just wouldn’t dare at the outset to, especially in the Nets’ case, throw a lot of support behind the risk-taking.

The Los Angeles Clippers surrendered a fistful of draft assets to Oklahoma City in July 2019 because they knew trading for Paul George would also clinch the free-agent signature of Kawhi Leonard. The Los Angeles Lakers made a similar move earlier that same month to acquire Anthony Davis from New Orleans and flank LeBron James with the most talented teammate of his career. Those were N.B.A. no-brainers.

Milwaukee’s gambit in November to part with three future first-round picks and the rights to swap first-rounders in two other drafts to pry Jrue Holiday away from the Pelicans is in a tier of its own. The Bucks endured a nervy wait that lasted almost a month after the Holiday trade until Giannis Antetokounmpo agreed to a five-year, $228 million contract extension. Persuading Antetokounmpo to stay, on some levels, equated to a championship in itself for the small-market Bucks, but they’ll surely need a major contribution from Holiday to shed their label of playoff underachievers and keep Antetokounmpo content.

Then the Nets’ trade realistically falls into a tier below that, since Milwaukee’s move was fueled by the understandable desperation to please and then re-sign Antetokounmpo.

As swiftly as Durant’s 30.6 points-per-game brilliance has made so many forget that he is only in the nascent stages of a comeback from the most dreaded injury in the sport — no one in the N.B.A., frankly, has ever looked better than Durant after an Achilles’ tendon tear — so many unknowns nag at the Nets.

Who in this trio will embrace third-wheel status like Chris Bosh so crucially did in Miami beside James and Dwyane Wade, or like Ray Allen did in Boston alongside Kevin Garnett and Paul Pierce? Who among Durant, Harden and Irving has the personality to lead the way to a pecking order? How can the Nets play passable playoff defense against offensive monsters like Antetokounmpo and Davis when Durant, Harden and Irving share the floor? How much can the Nets even count on Irving after his messy exits in Cleveland and Boston and this season’s bumpy start?

Don’t forget that the Nets are asking a rookie coach, Steve Nash, to steer this group to the answers to those questions — without a training camp on top of Nash’s lack of experience. Don’t forget, furthermore, that it took the James/Wade/Bosh Heat more than a season to figure a lot of this out.

Winning a championship is not the Nets’ only motivation here. If the Harden trade persuades Durant to sign a second contract with them, and if Harden sticks around, those would be significant triumphs.

The Nets, though, will not be graded on the ancillary benefits, or merely their success in ensuring that Harden didn’t land with the division-rival Sixers. They went all in believing that a change of scenery for the unhappy Harden will lead to a title in Year 1 — like it did for Leonard in Toronto and for Davis with the Lakers.

As much as we relished an actual basketball debate, temporarily hauling us away from the N.B.A.’s mounting coronavirus concerns, there are simply too many holes in that script to buy into it playing out three seasons in a row.

You ask; I answer. Every week in this space, I’ll field three questions posed via email at marcstein-newsletter@nytimes.com. (Please include your first and last name, as well as the city you’re writing in from, and make sure “Corner Three” is in the subject line.)

Q: Just wanted to mention that, while two-game series aren’t primary on the baseball schedule, they do happen all the time, even in nonpandemic years. The Yankees, for example, played five scheduled two-game series in the first half of the 2019 season. So “baseball series” does work as a name for the two-game sets in the N.B.A. this season. Stick with it. — Joe Sheehan (joesheehan.com)

Stein: Appreciate the perspective, Joe. I answered a question in Corner Three last week that suggested two-game sets never happen in baseball without properly challenging it.

That probably stems, at least in my fading memory, from them seeming much rarer in the 1970s and 1980s when I followed baseball more closely. I should have vetted the question with my ace New York Times baseball colleagues Tyler Kepner and James Wagner.

As for sticking with the term “baseball series” for the N.B.A.’s two-game sets featuring the same two teams playing consecutive games at the same arena, you might get your wish. Better alternatives have yet to materialize.

In last week’s newsletter, I asked for reader suggestions, which has proved to be a useful tactic in the past when I’ve gotten stuck on something. I regret to report that I have yet to receive what I would classify as an inspiring nomination.

Q: Instead of “baseball-style series,” how about “doubles” as the new term? I know it belongs to tennis, but it works: “The Lakers are playing a double against the Rockets in Houston. The second game is tonight.” — George Fuller

Stein: You made a passable case, George, compared to the other submissions received. But I can’t co-sign this.

Not only am I a huge tennis fan, as I’ve mentioned often before, but I am one of the world’s biggest doubles fans. I have campaigned for doubles to get more coverage from the tennis press since I was a teenager.

So I can’t bring myself to try to transform one of the pillar concepts of one of my three favorite sports into niche basketball lingo.

Q: Why did Kyrie Irving lose 1/81.6 of his salary for two games if there are 72 games this season? — @Alvaro32LA from Twitter

Stein: The league office, after recent negotiations with the players’ union, adjusted the per-game penalty for players who miss a game because of a violation of the N.B.A.’s health and safety protocols. I’m told that the penalty went from 1/72 of the player’s salary to 1/81.6 of the salary for each game missed; Irving missed two games during the five-day quarantine he received from the N.B.A. after he was caught on video maskless at a family birthday party.

The league and union calculated the 81.6 figure by adding four postseason games and a league average of 5.6 playoff games to the 72-game total. For the first three games that Irving missed, which the Nets attributed to “personal reasons,” Nets officials had the option to fine Irving at the higher rate of 1/72 of his $33,329,100 million salary for each game missed, which would have totaled more than $460,000 per game.

James Harden’s first game in Houston as a member of the Nets is only 42 days away on March 3. The game is expected to have 4,500 fans in attendance, too, with the Rockets on the short list of five N.B.A. teams allowing reduced crowds for home games.

Seven players have posted a triple-double in their first game with a new team, according to Stathead. Two of the seven — Harden and Washington’s Russell Westbrook — did so this season. Harden had 32 points, 12 rebounds and 14 assists (and 9 turnovers) in his Nets debut on Saturday in a victory over Orlando; Westbrook had 21 points, 11 rebounds and 15 assists in his Wizards debut on Dec. 23 in a loss to Philadelphia.

Harden is going ahead with plans to operate a steakhouse in midtown Houston. Thirteen, named for Harden’s jersey number, is scheduled to open by month’s end, according to Sherrie Handrinos, a spokeswoman for the restaurant. Kevin Durant owned a 25 percent stake in a restaurant in Oklahoma City, Kd’s Southern Cuisine, which filed an application to change its name to the Legacy Grill just days after Durant’s decision in July 2016 to leave the Thunder for the Golden State Warriors in free agency.

The Los Angeles Lakers’ LeBron James awoke Tuesday ranked 56th in the league at 32.2 minutes per game. It’s on pace to be the lowest average of his 18-season career by design, with James now 36 years old and coming off the shortest off-season in N.B.A. history. Only 72 days elapsed between the Lakers’ Game 6 finals victory over Miami to clinch the 2019-20 championship and their opening night loss to the Clippers on Dec. 22.

Only four players are averaging at least 37 minutes per game, and the Tom Thibodeau-coached Knicks have two of them. Indiana’s Domantas Sabonis leads the league at 37.5 minutes per game, followed by the Knicks’ duo RJ Barrett and Julius Randle and the Nets’ Harden, all of whom are tied at 37.1 minutes per game.