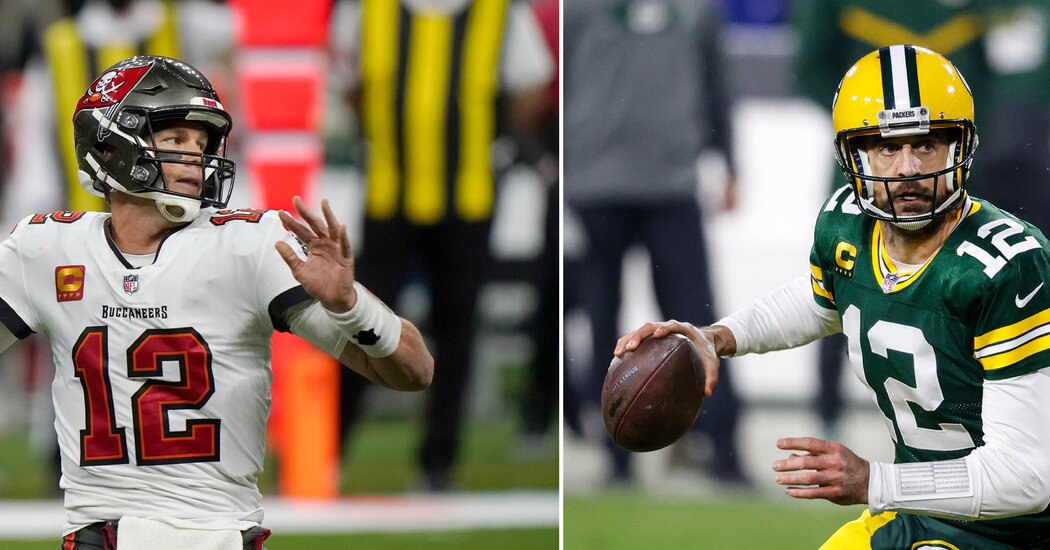 A complicated and stressful N.F.L. season is nearing its conclusion, with four star-studded teams facing off on Sunday with a Super Bowl appearance on the line. Each of the remaining teams has a Most Valuable Player Award candidate at quarterback, stars at wide receiver and defenses that can make big plays. The questions for this weekend include which of the N.F.C.’s celebrated quarterbacks will make his return to the Super Bowl and whether the upstart Buffalo Bills can knock off the defending champion Kansas City Chiefs.

Here is a look at the conference championship games. Unlike in the regular season, the picks in the playoffs are not made against the spread to emphasize which teams we believe will win.

More than a hundred players will suit up for this game, but the spotlight will fall on two of them: Tom Brady of the Buccaneers and Aaron Rodgers of the Packers. It isn’t unusual for quarterbacks to command most of the attention, but this matchup goes beyond that.

The quarterbacks have combined to start 551 games, including in the postseason. But largely as a result of playing in different conferences for most of their careers, they have faced off as starters just twice. Both games came in Brady’s time with the New England Patriots, with Brady beating the Packers in 2018 and Rodgers beating the Patriots in 2014.

Brady, 43, has a career edge in accomplishments. Rodgers, who is six years younger, has a physical edge. After a few quiet seasons, by his standards, Rodgers in 2020 used wide receivers Davante Adams and Marquez Valdes-Scantling to shred defenses as the Packers led the N.F.L. in scoring and finished fifth in total yardage. Brady’s statistics were also impressive, but he is more physically limited than he was in the past, frequently relying on talented receivers like Mike Evans, Chris Godwin and Antonio Brown and tight end Rob Gronkowski to turn short passes into long gains.

In a more neutral environment, Tampa Bay could have counted on its young defense to shift the balance in the Buccaneers’ favor by pressuring Rodgers. In that scenario, the team would rely on Brady to put up points against a good defense that is not nearly as explosive. But in Green Bay, with snow showers in the forecast and a game-time temperature expected to be around 30 degrees, a team from Florida — even one with a New England icon at quarterback — will be out of its element.

The Packers fought hard to secure home field advantage throughout the N.F.C. playoffs, and this game should reward them for that effort, ending the Buccaneers’ attempt to be the first team to appear in a Super Bowl in its home stadium. Pick: Packers

The Chiefs’ pursuit of a second straight Super Bowl victory hit its first real speed bump last weekend when Patrick Mahomes had his neck twisted by a defender as he was dragged to the turf, putting him in the N.F.L.’s concussion protocol and forcing him out of Kansas City’s 22-17 win over the Cleveland Browns. The Chiefs iced that victory with key plays by the backup quarterback, Chad Henne, but Mahomes’s absence was palpable in a game Kansas City was expected to win in a blowout.

Mahomes has practiced lightly this week while working to be cleared, but there is little fear he will miss the game. As a result, the A.F.C. will get a strength-against-strength matchup between the conference’s best teams of the regular season.

The Bills had an offensive renaissance this season thanks to the development of quarterback Josh Allen and the arrival of wide receiver Stefon Diggs. They led Buffalo to the second most points in the league and its first division title since 1995. While the defense took a major step backward from a brilliant 2019 season, a strong performance last weekend against the Baltimore Ravens proved the unit could be great when needed.

Buffalo might have to play a perfect game to compete with Kansas City. The Chiefs stormed back to win last season’s Super Bowl behind Mahomes’s brilliance, and lost only two games in the 2020 season — one a meaningless Week 17 game in which Mahomes and other starters were rested. The Chiefs will be at their best if running back Clyde Edwards-Helaire returns from a Week 16 hip injury, but the offense has plenty of options without him, including wide receiver Tyreek Hill and tight end Travis Kelce.

The Chiefs are the clear favorites, particularly at home, but Buffalo should not be counted out. If its defense can play the way it did in the divisional round and Allen can avoid mistakes, the Bills can turn this into quite a fight. But the most likely result is a Kansas City victory, which would give the Chiefs the chance to be the first team since the Patriots in the 2003 and 2004 seasons to repeat as Super Bowl champions. Pick: Chiefs.

All times are Eastern.