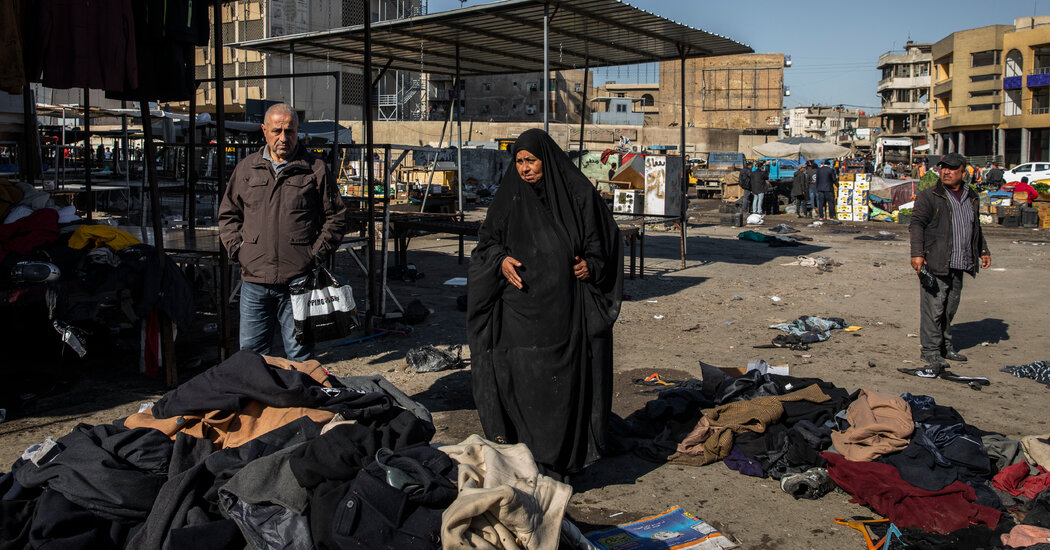 BAGHDAD — Two suicide bombers detonated explosive vests in a crowded market in central Baghdad on Thursday morning, killing at least 32 people in the biggest such attack in several years, according to the government.

The health and interior ministries, which reported the death toll, said that at least 100 were wounded.

“The first suicide bomber blew himself up after pretending to be sick to gather people around him,” said Maj. Gen. Khalid al Muhanna, a spokesman for the interior ministry. He said the bomber had fallen to the ground and then detonated the vest after people rushed to help him. The second bomber detonated his explosive nearby minutes later.

General Muhanna said the authorities suspected that the attackers were connected to the Islamic State terrorist group or an offshoot of it, although no group immediately claimed responsibility.

The Iraqi and U.S. governments have declared ISIS largely defeated in Iraq, and the United States is withdrawing most of its troops from the country, saying that Iraq is now capable of fighting ISIS on its own.

Four years after the last Iraqi city was liberated from ISIS, Iraqi security forces are still battling pockets of fighters, mostly in the desert near the Syrian border and in mountain hide-outs in north-central Iraq.

The ISIS sleeper cells target mostly security forces. They are a tiny remnant of the group that in 2014 took over one-third of Iraq.

Although Iraqi officials pointed to ISIS as the most likely culprit behind the bombings, bystanders at the site worried that political tensions were rising ahead of elections set for October. The vote was postponed from June after the election authorities said they would not be ready in time.

“It’s because of the elections — they are fighting for positions,” said Hussein Nahi, a porter at the scene who was wheeling goods in a wooden cart when the first bomber detonated his explosives. “This is because of disputes by the politicians, because always when elections are close, we pay the price.”

The outdoor market, near Tayaran Square, was crowded with shoppers buying new and used clothing when the attacks took place.

A few hours after the explosion, fruit and vegetable sellers with stalls piled with oranges and persimmons reopened for business while a few feet away city workers hosed down blood from the streets. One neighborhood resident, wearing a black cloak covering her hair, held up a bloodstained high-top white sneaker.

“These people who were killed were just selling shoes and clothes,” shouted Hannan Hassan, 72. “These corrupt politicians are fighting for their positions.”

She referred to a slogan of protesters whose demonstrations demanding an end to corruption and the provision of basic public services brought down the government two years ago.

Iraqi security forces and allied militia fighters killed hundreds of unarmed young people during those protests. Prime Minister Kathimi came to power pledging early elections and reform, but one of his main challenges has been reigning in the Iran-backed militias.

Volunteer forces that answered a call by Iraq’s most senior Shiite cleric to fight ISIS along with Iran-backed paramilitaries played a major role in fighting ISIS near Baghdad in 2014. Many units were later incorporated into Iraq’s official security forces, but the most powerful of them remain largely outside the control of government.