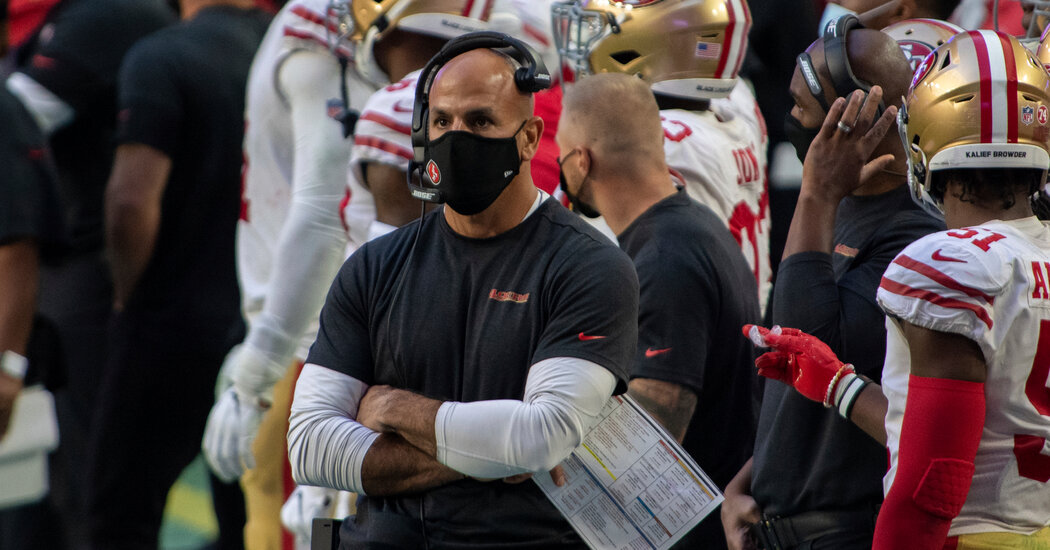 As Robert Saleh said he planned to infuse every aspect of the Jets with a clear identity, the team on Thursday formally announced the bulk of the staff that will support him as he begins his first season as the head coach of an N.F.L. team.

Several of the assistants have ties to the San Francisco 49ers, whose defense thrived with Saleh as its coordinator over the last four years. The Jets’ defense, which ranked 26th in points allowed in 2020, will be led by Jeff Ulbrich, who was promoted to the Atlanta Falcons’ co-defensive coordinator this season after serving as their linebackers coach since 2015.

Ulbrich spent his entire playing career with the 49ers, as a linebacker from 2000 to 2009, and when he was an assistant coach for special teams with the Seattle Seahawks, he worked with Saleh during the 2011 season. Saleh said that, unlike some former coordinators when they become head coaches, he would leave the defensive play calling to Ulbrich and take on more of an oversight role.

As Saleh, 41, tries to end the Jets’ 10-year streak of no postseason appearances, the question of whether to stick with quarterback Sam Darnold, the No. 3 pick in the 2018 draft, looms large. On Thursday, Saleh declined to discuss whether the team was considering using its No. 2 overall pick in this spring’s draft on another young quarterback or possibly trying to trade for the Houston Texans’ Deshaun Watson, who has reportedly become disaffected after the team’s hiring of a new general manager without his consultation.

Saleh offered a glowing review of Darnold’s arm and said: “He’s fearless in the pocket, he’s got a natural throwing motion, he’s mobile, he’s extremely intelligent,” adding that “his reputation in the locker room is unquestioned.” Yet he stopped short of guaranteeing that the team would hold onto Darnold as its starter for the coming season.

“We’re just getting the staff into the building so there’s so many things that we have to do from an evaluation standpoint with regards to the entire roster not just a quarterback,” Saleh said in his first news conference as head coach. “To give you that answer right now would not be fair.”

The new offensive coordinator, Mike LaFleur, will be coming from the 49ers’ staff, as will John Benton, the offensive line coach and run game coordinator. Greg Knapp, the Jets’ new passing game specialist, most recently worked with the Atlanta Falcons, but he started his N.F.L. coaching career in San Francisco in the 1990s and overlapped with Saleh on the Texans’ staff in 2010. Rob Calabrese, who most recently worked with the Denver Broncos, will be the new quarterbacks coach.

The 2020 Jets’ offense was the worst in the league in most categories under Adam Gase, who left the team with a 9-23 record during his two-year tenure. Saleh’s hope is to make the Jets’ offense reflect the 49ers’ system honed under Coach Kyle Shanahan.

Saleh said the team’s philosophy would be “all gas, no brakes,” a phrase he also used when he introduced himself as the 49ers’ defensive coordinator.

“He has consistently demonstrated the ability to innovate, motivate and collaborate,” Christopher Johnson, who has been serving as chairman of the Jets for the past four years, said of Saleh. “His character and passion are what this team needs.”

Johnson will also take on a new role with the Jets as their vice chairman, allowing his brother, Woody, to reclaim the decision-making spot as principal owner. Woody Johnson had been serving as ambassador to the United Kingdom since 2017 under the Trump administration; Christopher Johnson said his brother was flying back to the United States on Thursday.