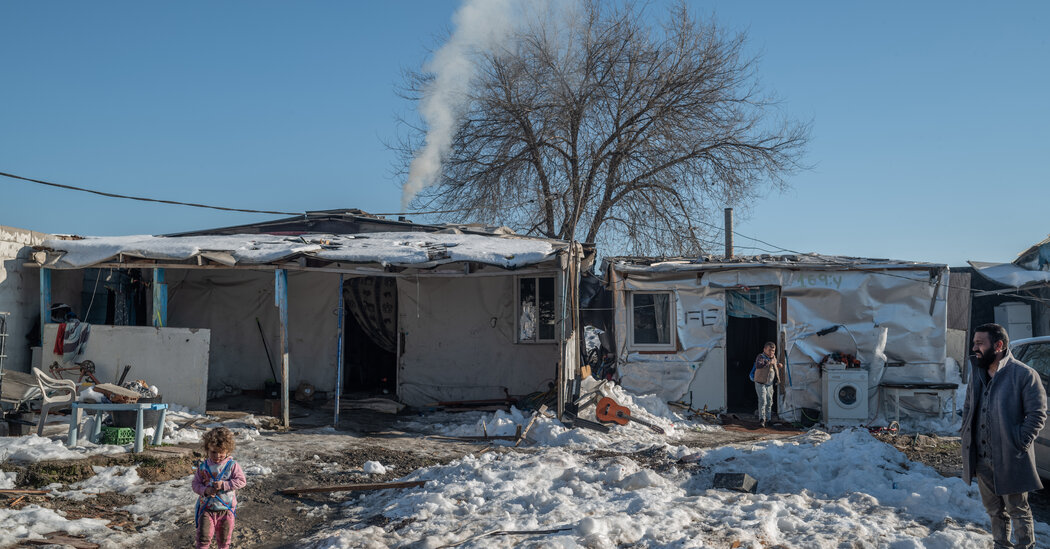 MADRID — Even before Madrid’s biggest snowfall in half a century caused part of her roof to collapse this month, Manuela Reyes Flores and her family were without electricity and running water as winter set in on their impoverished neighborhood on the outskirts of Spain’s capital.

So it was just one more level of misery for them and thousands of other residents of the neighborhood, Cañada Real, when the huge snowstorm two weeks ago blanketed Madrid in a foot and a half of snow. The capital region was paralyzed, and on Tuesday, Madrid was declared a disaster zone.

“We’ve never had an easy life,” said Ms. Reyes Flores, who settled in Cañada Real two decades ago as part of its large Roma community. She and her family have had to light open fires to keep warm, cook food and heat water for bathing.

“We had to build our own house, and we have always done our best to repair things without spending any money,” she said.

“But I can tell you that this place has now gone from disastrous to simply unlivable,” she added as she placed a bucket under a leak from the hole in her ceiling caused by the weight of the fresh snow.

Cañada Real, home to about 8,000 people, is one of Europe’s largest poverty-ravaged neighborhoods. While part of the area is dotted with brick-and-mortar houses, at least half of the people there live under corrugated roofs and tarpaulin, which is also used instead of glass windows.

The neighborhood has been a political football for decades, with several layers of government and different municipalities sharing responsibility for the vast stretch of land. Amid the political foot-dragging, about 15 nongovernmental organizations have stepped in to help the most vulnerable in Cañada Real. The number of Spanish aid workers has also risen since the pandemic began, because travel restrictions have stopped them from working outside Spain.

“I consider life in Cañada Real to be just as horrendous as in Bosnia, except that it feels even more shocking and disgraceful, because we have allowed this to happen in the capital of Spain and within the European Union,” she said after surveying the snowstorm’s damage.

In 2017, lawmakers agreed to dismantle part of Cañada Real and move thousands of residents to subsidized apartments around Madrid. But only 105 such apartments have been made available.

In October, Naturgy, a utility, cut the electricity supply to most of Cañada Real, saying residents were making intensive, unregulated and unsafe use of its electricity even though the area had only four official customer accounts.

The power cut led to clashes between the police and residents. The clashes intensified once the police moved in, detained a dozen people and destroyed several marijuana plots.

In December, a group of experts from the United Nations urged Spanish authorities to restore the electricity, particularly to protect the approximately 1,800 children who live in the area.

“You cannot punish an entire population for the crimes of a few,” said Javier Baeza, a priest who regularly visits Cañada Real to assist its residents. “The political handling of Cañada Real can only be called terrible.”

Madrid’s City Hall, responding to emailed questions, described Cañada Real as a challenge rather than a failure, noting that its relocation plan had received “a strong boost in the past year.”

It also noted that the problem of Cañada Real dates back decades.

“If the solution was easy, it would have been solved, because during all this time, under all administrations, there have been people who have genuinely been very concerned by the situation there,” the city government said.

Cañada Real was once a pathway for farmers to cross Spain in search of fresh grazing ground for their sheep. But starting in the 1960s, Madrid’s industrial expansion persuaded families to turn the land into vegetable gardens and eventually live on it.

Over the years, as property developers took over other impoverished neighborhoods and evictions accelerated elsewhere in Madrid, Cañada Real’s population swelled. From the 1990s, migrants arrived in large numbers, particularly from Morocco and Romania.

One local landmark is a church where drug dealers and users congregate and smoke heroin in full view of police officers patrolling the area. The police say they intervene only in an emergency, if there is violence or someone is in a critical health situation.

Many residents eagerly await keys to the promised subsidized apartments so they can move on. But some have mixed feelings about leaving, worried about having to pay rent and possible tensions with new neighbors.

“We all know each other around here, but I really don’t think that people living in any other part of Madrid would love to have a Gypsy family next door,” said Miguel Maya, who collects and sells scrap metal, like many in the Roma community.

Rather than leave, some residents want the authorities to invest in basic infrastructure and legalize their longstanding presence there.

Carmen Carbonell Escudero, 68, lives in Cañada Real with her husband. Even though they have no proof of ownership, she said the couple had paid €20,000, about $24,300, to buy their derelict home from its previous occupant.

“Of course I knew that we were buying something illegal here, but how many people far richer than me now have a lovely house for which they never got a proper permit?” Ms. Carbonell Escudero said. “In Spain, if you wait long enough, what was illegal can become legal.”

Eugenio García-Calderón, an engineer who previously provided solar energy to people in the Brazilian Amazon, said he had come to Cañada Real after its power was cut. The inflow of emergency aid was welcome, he said, but “nothing good can really happen here until we have a sustainable model, something that makes people self-sufficient rather than reliant on outside help.”