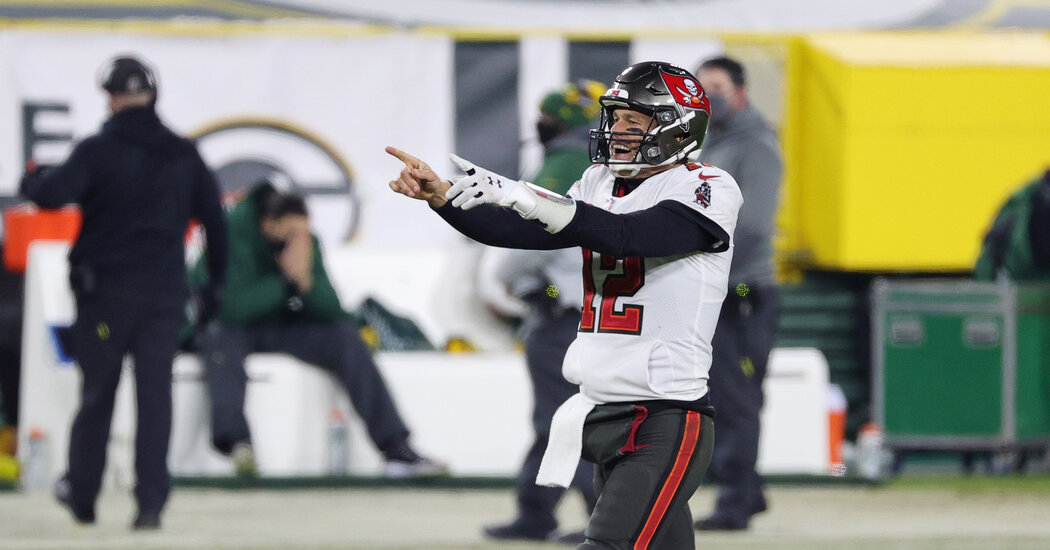 In a stirring, tense duel between two future Hall of Fame quarterbacks, Tom Brady and the Tampa Bay Buccaneers held off a late charge by Aaron Rodgers and the Green Bay Packers for a 31-26 upset victory in the N.F.C. championship game Sunday in Green Bay, Wis. The Buccaneers will become the first N.F.L. team to play a Super Bowl at its home stadium on Feb. 7.

Tampa Bay, with a third successive postseason victory on the road, took an 11-point halftime lead on two Brady touchdown passes. The Packers, the top seed in the conference, stormed back at Green Bay’s Lambeau Field, trimming the deficit to five points late in the third quarter. But Brady, who will be making his 10th Super Bowl appearance, led fifth-seeded Tampa Bay to a pivotal fourth-quarter field goal and the Packers failed to score a touchdown on a crucial, late possession despite a first-and-goal at the Buccaneers’ 8-yard line.

The Buccaneers will play the winner of Sunday night’s A.F.C. championship game between the Buffalo Bills and the host Kansas City Chiefs in Super Bowl LV at Tampa’s Raymond James Stadium. Brady, 43, who left the New England Patriots as a free agent in March after 20 seasons and six Super Bowl titles, will become just the fourth quarterback to lead two different teams to the Super Bowl. It was previously done by Kurt Warner, Peyton Manning and Craig Morton.

For Rodgers, who won the Super Bowl after the 2010 season, Sunday’s loss was his fourth in a conference championship game.