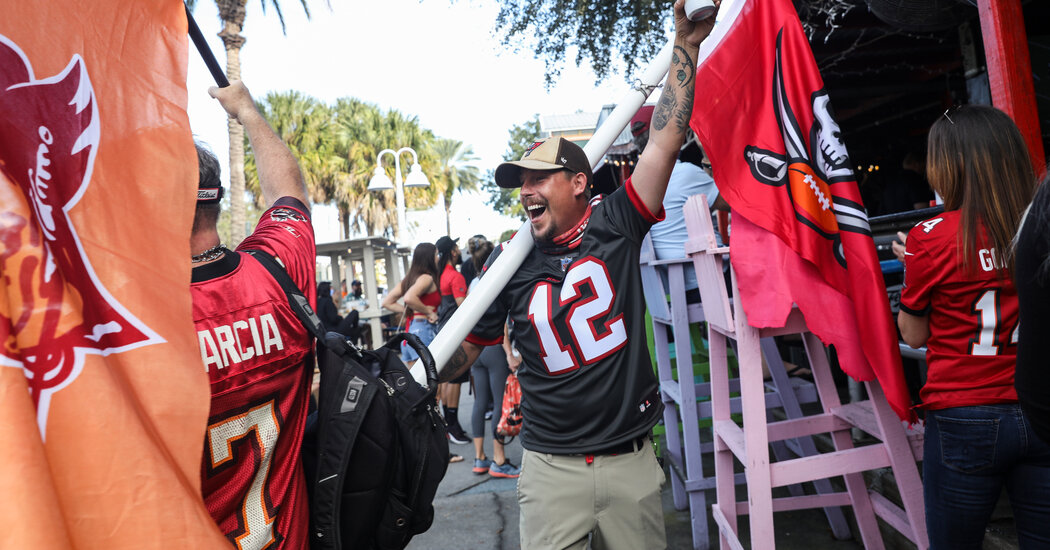 Twenty-six straight losses in football. Acres of empty seats at Tropicana Field. A court order to seize the local N.H.L. team’s skates and other equipment if needed to pay a debt. Let’s just say Tampa Bay had not earned a reputation as a hub of professional sports excellence.

Until now. In a purple patch to rival the best of them in Boston, New York or Los Angeles, Tampa’s three top-level men’s pro teams have all made their league’s finals over the last five months. The amazing run was capped on Sunday by Tom Brady leading the Tampa Bay Buccaneers to a victory over the Green Bay Packers, clinching the first home stadium Super Bowl.

Tampa Bay as Titletown? It just might be so.

The Buccaneers became a symbol for futility in the N.F.L. when they debuted in 1976 and lost 26 straight games over two seasons before their first win. “I couldn’t wish that on my worst enemy,” said Richard Wood, a linebacker on those teams. Even a run to the N.F.C. championship game in the 1979 season couldn’t shake the impression for most fans that “Buccaneers” was synonymous with “futility.”

When Brady, 43, decided to play quarterback for the team after 20 seasons in New England some assumed it would be a sinecure in the sun. Not at all. Tight end Rob Gronkowski came out of retirement to join his old teammate, and the Buccaneers also added running back Leonard Fournette to a loaded offense. A young defense looked consistently good. The signs were there for a better season.

But an 11-5 regular season? Three road playoff wins, including upsets of the second-seeded New Orleans Saints and the top-seeded Green Bay Packers? A trip to the Super Bowl? Few saw that coming.

The Rays had a small budget and few fans, but claimed a World Series spot.

The Tampa Bay Rays started their first Major League Baseball season in 1998 as the Devil Rays. They promptly posted 10 straight seasons of 70 or fewer wins, notably finishing with a 55-106 record in 2002 that plumbed the depths of ineptitude for a modern professional sports team.

Failure and the Rays seemed to go hand in hand, especially because the team’s average attendance at Tropicana Field nearly always ranked at the bottom of the league — even when the team performed well — providing bad optics for fans tuning in on TV. And the Rays worked with a much smaller budget than the behemoths of the game, making sustained contention difficult.

The team emerged from its doldrums to earn an unlikely World Series trip in 2008 (their first season as merely the Rays), losing to the Phillies in five games, and it’s been pretty good in the years since.

Still, the signs did not point to a return to the World Series in 2020. The Rays were 0-4 in playoff series in the 11 years between World Series appearances.

But Tampa Bay beat the Yankees in the 2020 division series, then eliminated the defending American League champion Houston Astros in the A.L.C.S. As World Series underdogs again last October, they took the Dodgers to six games before falling just short of the big prize. Brandon Lowe hit 14 homers in the abbreviated 60-game season and reliever Nick Anderson had an 0.55 ERA in 19 appearances, but the team got this close to the championship mostly without stars, and continued to have one of the five lowest payrolls in the league.

The Lightning put their skates and pucks to good use.

The Tampa Bay Lightning started slowly when it began N.H.L. play in the 1992-93 season, and hit rock bottom from 1997 to 2000 when they couldn’t manage 20 wins in an 82-game schedule even once. Financial losses and debt piled up, leading to a court order in 1998 allowing seizure of the team’s sticks, pucks, nets, uniforms and skates if the team couldn’t meet its debts. (The team paid up.)

But in more recent times, the Lightning have been carrying the banner for Tampa sports, with a Stanley Cup win in 2004, and a finals loss in 2015.

In the pandemic-shortened 2019-20 season, most figured the Lightning as a contender, and they delivered, tying for the third-highest points percentage with a 43-21-6 record and ripping through playoff series against the Columbus Blue Jackets, Boston Bruins, Islanders and finally, in September, the Stanley Cup finals against the Dallas Stars. Tampa Bay lost just six games over the four playoff series. Brayden Point led all playoff scorers with 14 goals, and defenseman Victor Hedman won the Conn Smythe Trophy as the postseason’s most valuable player.

The recent success of some of the area’s pro teams, which each began as expansion-era punch lines, has raised the question: Who’s next?

While Tampa has been mentioned as a possible expansion city for both the N.B.A. and M.L.S., other cities seem to be ahead in the queue.

Because of coronavirus concerns in Canada, the Toronto Raptors of the N.B.A. began the 2020-21 season playing its home games in Tampa. Given the area’s current sports magic, it may be too soon to dismiss the possibility of them making a championship run.

Tampa Bay’s current enchanted run of sporting success will culminate on Feb. 7 at Raymond James Stadium, when the Buccaneers will become the first N.F.L. franchise to play in a Super Bowl in its home venue. And when The Weeknd takes the stage at halftime, he’ll be performing, improbably, in what is now the sports capital of the country.