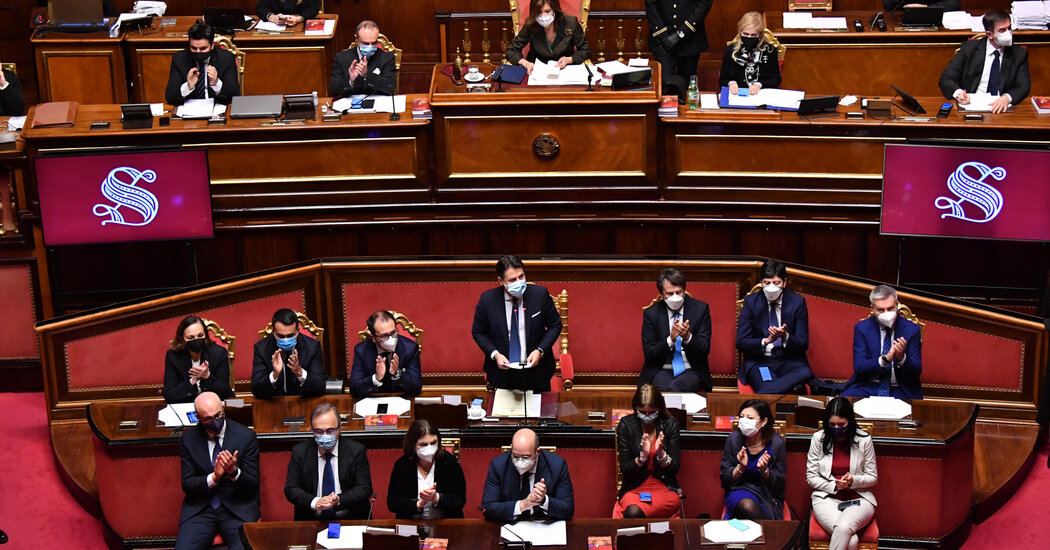 Prime Minister Giuseppe Conte of Italy will offer his resignation on Tuesday, his office said on Monday evening, likely leading to the collapse of Italy’s teetering government and plunging the country deeper into political chaos as it faces a still serious coronavirus epidemic and a halting vaccine rollout.

Mr. Conte’s resignation will put Italy back in the familiar situation of government instability, but in extraordinary times, with tens of millions of Italians struggling to stay healthy and get by under pandemic restrictions and a deep, global recession.

The coronavirus has killed more than 85,000 Italians, one of the world’s highest death tolls. The government, which was making slow but steady progress in vaccinating public health workers, has hit a speed bump and threatened to sue Pfizer for a shortfall in vaccine doses.

What will happen after Mr. Conte offers his resignation to President Sergio Mattarella remains unclear. Mr. Conte could remain in charge, heading a new governing coalition with a different lineup of parties, but the possibilities also include a more thorough reorganization under a different prime minister, or even elections to choose a new Parliament.

Mr. Conte, who is serving his second consecutive stint as Prime Minister — first as the head of an alliance of right-wing nationalists and populists, and then as the leader of a coalition of populists and the center-left establishment — desperately wants to stay in power.

But last week, Matteo Renzi, a wily former prime minister and critic of Mr. Conte, unexpectedly pulled his small center-left party out of the government, depriving it of majority support in the Senate. Mr. Conte, who leads a coalition of the populist Five Star Movement and the center-left Democratic Party, has been unable to attract enough new support in Parliament to replace the votes Mr. Renzi took away.

Mr. Renzi said he withdrew from the coalition to protest Mr. Conte’s management of the epidemic, his lack of vision in deciding where to allocate hundreds of billions of euros in recovery funds that Italy is set to receive from the European Union, and his undemocratic methods in icing out Parliament by relying on unelected task forces.

But many here instead saw Mr. Renzi as performing a complicated political maneuver designed to take revenge on his enemies and gain more influence in the government, perhaps even in a third consecutive government led by Mr. Conte.

Mr. Mattarella, the Italian president, is imbued with extraordinary powers during a government crisis and has several options for resolving the crisis.

He could, in theory, ask the current coalition to continue, but it is seen as all but certain that he will accept that the government has collapsed. He could task Mr. Conte with forming a new government, which would essentially require the support, and appeasement, of Mr. Renzi’s party, with or without him. That would lead to what was in essence a glorified cabinet reshuffle.

On Monday night, a third Conte government seemed, at least publicly, to be the governing coalition’s first choice.

Nicola Zingaretti, the leader of the Democratic Party, which Mr. Renzi once led, said in a Twitter post Monday evening that he was “with Conte for a new government.”

The anti-establishment Five Star movement argued that another government led by Mr. Conte was the only solution.

“We are standing by Conte,” the Five Star lawmakers Davide Crippa and Ettore Licheri wrote, adding, “The Movement is here and ready to do its part.”

But the return of Mr. Conte, a previously unknown law professor and political independent whom Five Star handpicked to lead the country in 2018, is by no means guaranteed.

While he has strong approval numbers, he has proved to be less adept at winning over the lawmakers from whom his institutional power is derived.

If Mr. Mattarella decides that a third Conte government is implausible, he can appoint a new political figure or technocrat to form a government supported by a different lineup of parties, perhaps limiting its mandate to vaccinating the country and managing the more than 200 billion euros, or $243 billion, in aid from Brussels.

It is unlikely that he will call for early elections, which polls suggest would probably put right-wing nationalist parties in power.

“Enough losing time, enough palace games,” Matteo Salvini, the nationalist who would benefit most from such elections, said in a video he posted on social media on Monday night. “Let’s use the next weeks to give a say back to the people.”

Mr. Renzi has said he has no interest in allowing new elections to go forward. But Mr. Zingaretti and others have worried that Mr. Renzi’s gambit, while now appearing to be paying off, has introduced a level of uncertainty that could lead there nonetheless.

Mr. Renzi, once a popular prime minister, is down to the low single digits in public support. But he has proved a skillful internal operator. He used the levers of power at his disposal 17 months ago, during the last government crisis, to prevent snap elections and banish Mr. Salvini to the opposition.

Back then, he boxed out Mr. Salvini by supporting a coalition between Five Star, which he openly loathed, and the Democratic Party, a union he had previously prevented and denounced. He also gave his support to Mr. Conte as that coalition’s prime minister.

But this month, Mr. Renzi decided it was time to pull the plug on his support.

For a week, Mr. Conte tried to gather enough votes from centrist or center-right members to salvage his administration.

“To all those who have at heart the destiny of Italy,” Mr. Conte said last week in Parliament. “I am asking today, help us, help us.”

Mr. Conte and his supporters sought help in places they usually disparaged as “cattle markets,” including among a grab bag of unaffiliated lawmakers who Five Star had disdained as traitors in the past. They promised political backing to a mayoral candidate in Rome if he could help deliver lawmakers. Instead he embarrassed them by Tweeting about their quid pro quo offers.

They even wooed followers of Silvio Berlusconi — the media mogul and conservative former prime minister whom the Democratic Party and Five Star have long viewed with contempt.

But the help Mr. Conte appealed for did not come.

“No negotiation is taking place, neither on my part nor by my collaborators,” Mr. Berlusconi, leader of the center-right Forza Italia party, wrote in a post on social media, “to potentially support in any way the ruling government.”

Mr. Berlusconi indicated as a possible solution to the crisis a broad new coalition that would include conservatives and “represent the substantial unity of the country in a time of emergency.” If not, he said, there should be new elections.