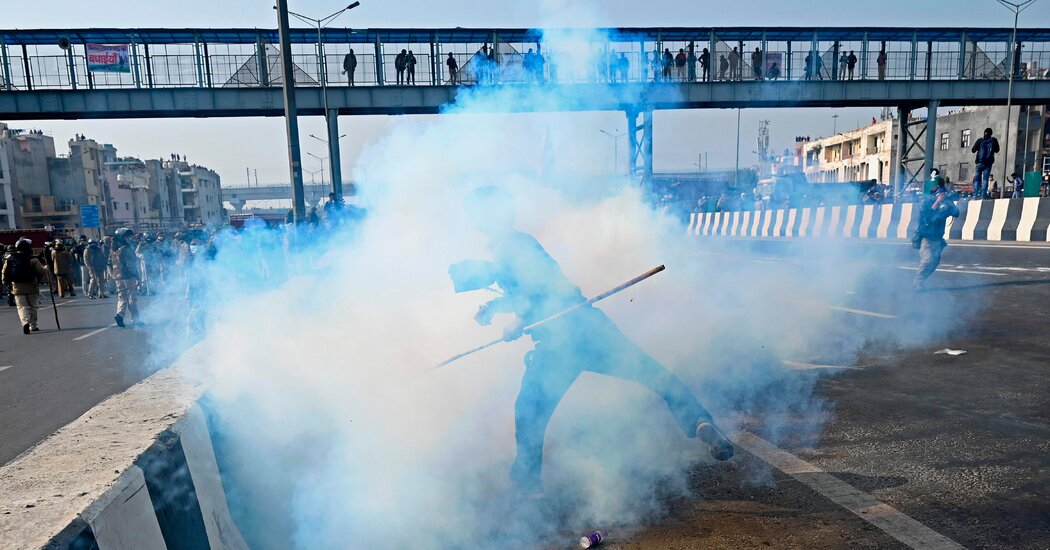 NEW DELHI — As pomp and color of military parades go, India’s Republic Day celebrations rank among the most eye-catching.

But on Tuesday, just as the government of Prime Minister Narendra Modi prepared to celebrate the anniversary of the inception of the country’s Constitution with another parade by the armed forces, an unlikely force was preparing to upstage the show.

India’s protesting farmers, who have been camped out at the gates of New Delhi for two months demanding that Mr. Modi repeal laws that would reshape Indian agriculture, were preparing to march into the capital with thousands of tractors.

The show of force, after the central government failed in its frantic efforts to prevent the tractor march, dramatically illustrated how deeply the deadlock with the farmers has embarrassed Mr. Modi. Though he has emerged as India’s most dominant figure after crushing his political opposition, the farmers have been persistently defiant.

Mr. Modi in September rushed through the Parliament three farming laws that he hopes will inject private investment into a sector that has been troubled with inefficiency and a lack of money for decades. But farmers quickly rose up against them, saying the government’s easing of regulations had left them at the mercy of corporate giants that would take over their businesses.

As their protests have grown in size and anger, with tens of thousands of farmers camped out in the cold for two months and dozens of deaths among them, the government has offered to amend some parts of the laws to include their demands. The country’s Supreme Court also intervened, ordering the government to suspend the laws until it reaches a resolution with the farmers.

But the farmers say they will not stop short of a repeal, and they have begun increasing pressure. In addition to their tractor march on Tuesday, they have announced plans to hold a march by foot to the Indian Parliament on Feb. 1, when the country’s new budget will be presented.

Tensions were high leading up to Tuesday, with some officials claiming the protests had been infiltrated by insurgent elements who would resort to violence if the farmers were allowed inside the city. Just days before the tractor march, the farmers’ leaders brought in front of the media a young man they claimed they had arrested on suspicion of a plot to shoot the leaders on Tuesday to disrupt the rally. Neither set of claims could be independently verified.

There was some confusion about the scope and size of the tractor march before it was to begin. Reports in the local media, citing documents from the Delhi police, said the march would begin only after the high-profile Republic Day parade in the heart of New Delhi had culminated. The reports also said the number of tractors and how long they could stay inside the city had been capped.

But farm leaders at a news conference on Monday said there were no limitations on time and number of tractors as long as they stuck to the routes set out by the Delhi police. Maps of the routes suggested a compromise between the farmers and the police that could allow the protesters to enter the city but not get close to sensitive institutions of power.

The leaders said that about 150,000 tractors had gathered at the borders of the capital for the march, that about 3,000 volunteers would try to help the police in keeping order, and that 100 ambulances were on standby.

The farm leaders, both in statements given to the marchers as well as during the news conference, repeatedly appealed for peace as they carried out the tractor march.

“Remember, our aim is not to conquer Delhi, but to win over the hearts of the people of this country,” they said in instructions posted online for marchers, who were told not to carry weapons — “not even sticks” — during the march and to avoid provocative slogans and banners.

“The trademark of this agitation has been that it’s peaceful,” Balbir Singh Rajewal, one of the main leaders of the movement, said. “My request to our farmer brothers, to our youth, is that they keep this movement peaceful. The government is spreading rumors, the agencies have started misguiding people. Beware of it.

“If we remain peaceful, we’ve won. If we turn violent, Modi will win.”