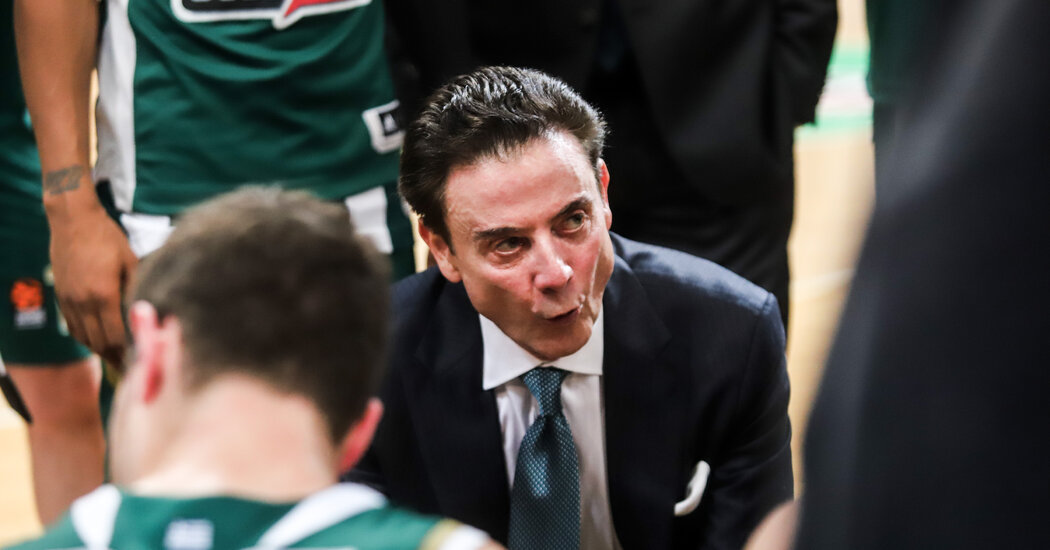 Rick Pitino, the Hall of Fame basketball coach now at Iona College, said he had tested positive for the coronavirus this month, 10 days after getting his first shot of a two-dose vaccine.

Pitino, 68, told reporters on Tuesday that he had felt some symptoms during his illness, but is feeling better now and still plans to get the second vaccine shot.

He said on “The Michael Kay Show” that he believed he contracted the virus from his players, and that he tested positive on Jan. 16.

“I was vaccinated, and unfortunately it takes two weeks to probably kick in where you have 50 percent immunity, so unfortunately it didn’t work totally with me and we move on,” he said on a videoconference with reporters.

“I’m fine, I’m out of quarantine,” he added. “I was very lucky. I didn’t have the severe symptoms that many people have had and I’m ready to go.”

He told The New York Times on Tuesday night that he has since tested negative for the virus several times.

Pitino’s experience is the latest in a string of setbacks related to the pandemic that the coach and his team have endured since he took the job last March at Iona, a small Catholic college in New Rochelle, N.Y.

Pitino, the only coach to win N.C.A.A. men’s basketball championships at two schools (Kentucky and Louisville), has said he hopes to coach at Iona for the next five to seven years and retire there.

Pitino came to Iona with the baggage of multiple scandals that occurred on his watch at Louisville, where he was ousted in 2017 amid an F.B.I. investigation in which two assistant coaches under Pitino were accused of funneling money from the university’s apparel sponsor, Adidas, to high school recruits. Pitino has long said that he did not know about the scheme, or another involving a staff member soliciting prostitutes and strippers for players and recruits.

After Pitino was fired, he spent two seasons coaching professionally in Greece before being hired at Iona, where his first season has been upended by the virus.

The men’s basketball team has suspended activities three times this season for separate coronavirus issues. It has not played since a Dec. 23 home win over Coppin State. The Gaels (5-3, 3-1 Metro Atlantic Athletic Conference) aren’t scheduled to play again until a conference game Feb. 3 against Manhattan — a 42-day break between games.

Pitino estimated that half of his team has had the virus this season, and said that some of his players have recently shown symptoms.

He said he quarantined for 10 days in an apartment on campus after he tested positive earlier this month.

“I did not want to give it to my wife,” he said. “I was living the life of a monk. The TV doesn’t have many channels, so I did a lot of reading. I watched a lot of basketball, believe it or not, on my phone. So there wasn’t much to do for 10 days, but it’s over. I’m out.”

Before the season began in November, Pitino said he supported delaying the season to set up an N.C.A.A. tournament in May, rather than in late March and early April.

“I’m a little bit of a political animal — I follow the science of it all, and that’s why I tried to move it back to May Madness for the health of everybody involved,” he said. “I thought the vaccine would come out maybe a week or two later than it’s actually come out, so that’s good news. It’s frustrating, but I knew it would be.”

Saint Peter’s was scheduled to visit Iona for a pair of league games Jan. 15-16, but those games were put on hold after Iona went into its third pause of the season.

“It’s very difficult, you just don’t know,” said Saint Peter’s coach Shaheen Holloway, whose team didn’t play a game between Jan. 3 and Jan. 22 because of the Iona postponements. “Sometimes you prepare all week for one team and then they throw you another team. We were out 20 days, and knock on wood, we haven’t had a positive test yet, so being out 20 days kind of knocked our rhythm off, kind of messed us up just game-planning-wise. So I can’t imagine what it’s like for teams like Iona and Monmouth and Siena that have had long pauses. There’s no way to prepare for it.”

Monmouth didn’t play its first game of the season until Dec. 15 because of positive virus tests among the team. The program announced another pause last week.

Siena did not begin its season until Jan. 3 and has now played eight games.

Pitino said he was “very concerned” that some of his players are symptomatic as students get set to return to campus Feb. 1.

“We are very blessed compared to the 400,000 deaths and all the families that have suffered with not even being able to have funerals,” Pitino said. “So my heart breaks for those people, and certainly with the vaccine coming out and maybe by this summer we’ll have some good news.”