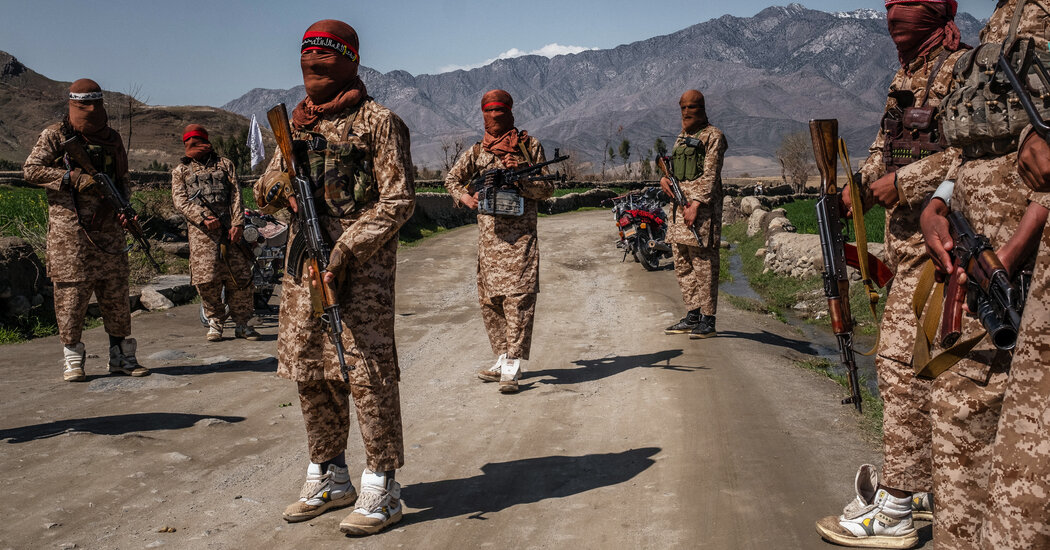 MAZAR-I-SHARIF, Afghanistan — The unassuming white leather high-top sneakers with green-and-yellow trim are a best seller for a roughly half-dozen shoe vendors in a sprawling bazaar in the northern city of Mazar-i-Sharif.

But they are not in demand because they’re the latest fashion trend. For many Afghans, the sneakers evoke only one emotion: fear.

That’s because they’re beloved by Taliban fighters as a status symbol even as they have become a gruesome marker of an unending war, the sneakers’ white silhouette often cutting across Afghanistan’s battlefields of dirt, sand and blood.

Called Cheetahs, the sneakers are produced by Servis Shoes, one of the largest shoe companies in Pakistan. They are marketed toward athletes, once endorsed by sports stars, and are the company’s best-selling model.

In Afghanistan they’ve been worn by rifle-wielding insurgents for decades — from the Soviet-Afghan war in the 1980s to the U.S.-led war that began in 2001. They are burned into the memories of many, along with the wanton death and destruction the country has endured since the Soviet Union invaded the country in 1979.

The sneakers have become synonymous with violence, and especially so on the feet of the Taliban.

At the market in Mazar-i-Sharif, the vendors’ stands are all neatly arranged — a commerce hub replete with kebab stands, home improvement and pharmaceutical goods, children’s toys and everyday clothing.

The popularity of the high-tops — which come in instantly recognizable white-and-blue boxes — is something rarely acknowledged aloud. But they are often inconspicuously displayed among the pairs of walking and running shoes, boots and sandals, a single sneaker sitting at the front of many vendor tables that line the bazaar’s dimly lit alleyways.

The positioning is almost like a subtle message: “You can get these here, but inquire quietly.”

“I don’t ask,” Hashim Shingal, 36, said, referring to who was buying his sneakers.

Mr. Shingal was just one of a few shoe vendors who were comfortable speaking on the record. At least 10 others refused, mostly because they feared incurring tax or retribution from the Taliban.

Even in the heart of Afghanistan’s most populated cities, including the capital of Kabul, the shoes evoke a certain sense of dread.

“I have seen these shoes worn by the Taliban many times,” Said Mar Jan, a resident of Khost city in Afghanistan’s mountainous east, said. Government militia members, some security forces, criminals and people in rural areas also buy and wear them.

Servis (pronounced “Sarwees”) introduced the Cheetah line in the early 1980s, and they started showing up in Afghanistan shortly thereafter.

Brig. Gen. Khair Mohammad Timor, a former insurgent commander who fought the Communist-backed Afghan government and the Taliban before becoming a police chief in 2011, recalled that more than 30 years ago, his superior officer ordered the shoes to make his fighters look more professional.

They “became a tradition,” said General Timor, who was accused of human rights abuses in a 2015 Human Rights Watch report.

But as U.S. forces surged into Afghanistan in 2001, the shoes became quickly associated with the Taliban, who had risen to power in 1996 and adopted the footwear along the way.

“Most of the time, we put on white shoes and the whiteness gives the sign of peace,” Najibullah Aqtash, a local Taliban commander in Kunduz Province, said flatly. He noted that white was also the color of the Taliban’s flag.

American troops referred to the sneakers as Haqqani High-Tops, after the group’s violent and criminal wing located in the country’s east and neighboring tribal areas in Pakistan. They would often stop and question people seen wearing them, and intelligence officers would sometimes tell units deployed to Afghanistan: Look out for the sneakers.

These days, though, American forces have slowly withdrawn from the country. The Afghan military and police bear the brunt of the fighting now, losing dozens of troops a week, while the roughly 2,500 U.S. service members still in the country provide airstrikes.

Today, the shoes cost from roughly $13 to $25, depending on where they are being sold and if they are the original Servis brand or Chinese knockoffs, which are deceptively similar but of poorer quality. No matter who makes them, the high-tops are comfy and sturdy.

In Afghanistan’s South, Taliban fighters frequently trade their sandals for Cheetahs in the winter, but they are sometimes worn year-round in more mountainous parts of the country, lasting about a year before they need to be replaced, according to Taliban members.

The Taliban acquire the sneakers — which also come in low-top styles and in the color black — in different ways, depending on their region, according to several Taliban members and shop owners.

Taliban commanders in the north, east and west, for the most part, send taxi drivers or associates into city centers to buy them in bulk from local vendors, like Mr. Shingal. He said winter was his best season; he sells about 300 pairs a month. He added that his clients were mostly from districts outside Mazar-i-Sharif, where fighting between the Taliban and the Afghan government is ongoing.

His customers almost always ask for receipts, he said.

In the south, Taliban commanders cross into Pakistan, buying the shoes in border cities such as Quetta and Chaman.

Roughly two years ago, a high-ranking Taliban commander recalled preparing for an operation against the Islamic State’s affiliate in the country that was entrenched in Kunar Province. The commander said the battle would be difficult and he wanted his men to “fight comfortably,” so he dispatched taxi drivers to buy 200 pairs of Cheetahs in Jalalabad, a bustling city in the east.

The Taliban and the Afghan government are now in peace talks in Qatar. As those negotiations inch forward, the Taliban have made a concerted propaganda push to publicly divorce themselves from the Cheetahs to try to appear more like a professional army — despite their history as an insurgent force responsible for human rights abuses, oppression of women under their harsh interpretation of Islamic law and having taken part in a recent campaign of targeted killings on civil society members across the country.

Their videos and images instead display uniforms and military boots, sometimes looted, along with U.S.-supplied weapons, from Afghan army bases.

In Kabul city’s beating epicenter, on the second floor of a row of shops, is the office of the only licensed Servis importer and distributor in Afghanistan.

Servis has been officially importing the shoes in Afghanistan for roughly 25 years, said Omar Saeed, the chief executive officer of Servis until 2019 who now serves on the board of directors of Service Industries Limited, the parent company.

In a good year, Mr. Saeed said, the company typically exports around 200,000 pairs to Afghanistan. In Pakistan, the only other country where Cheetahs are officially sold, the company usually sells more than one million pairs.

“We think everyone in Afghanistan wears it,” Mr. Saeed said of the sneaker in a recent telephone interview. “We don’t think of it as a shoe made for the Taliban.”

The warehouse in Kabul is the main distribution hub for the shoes that are stitched and glued together in a factory in Gujrat, Pakistan, before they are shipped across the border.

An older man in the Kabul office, who would not give his name, looked alarmed when asked about the sneakers and his business. He refused to talk about them.

But in the cramped, dimly lit room, the distinctive Servis Cheetah boxes were piled nearly floor to ceiling.