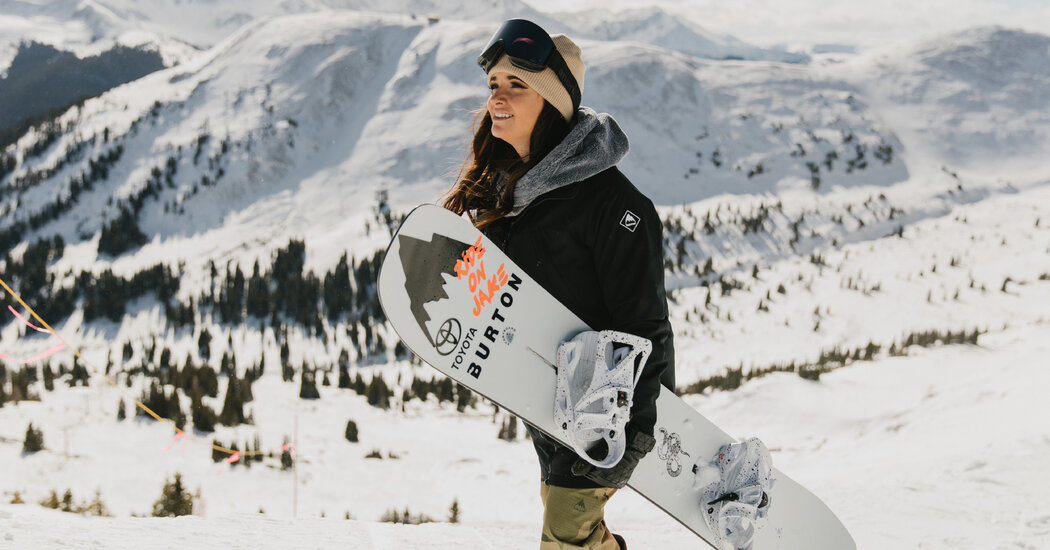 When Kiana Clay rides a chairlift, she always sits on the left side of the seat so she can use her one functioning arm to push off at the top. Once there, she steps onto her snowboard, points down the mountain and picks up speed.

She has racked up several top finishes as she aims to compete in the 2022 Paralympics in Beijing and recently became the first para snowboarder to be signed by the Burton Team, one of the best-known in snowboarding and whose members have included Olympians like Kelly Clark, Chloe Kim and Shaun White.

“What struck me with Kiana right away is that she saw how her work might benefit others,” said Donna Carpenter, owner of the Burton snowboarding company, which sponsors the team. “She’s got that single-minded determination, the eye of the tiger that you can recognize in a good athlete.’’

Carpenter first learned of Clay when she spoke at a national sportswomen conference a few years ago and was captivated.

“Her speech was so powerful coming out of this little package,” Carpenter said. “When she talked about refinding her purpose with snowboarding and the sense of freedom it brought her, I was like, we have to connect.”

Clay being in the next Paralympics is far from a certainty but not because of her performance. Her class, female snowboarders with upper limb disabilities, is not scheduled to appear in the Paralympics until the 2026 Games in northern Italy, because of an insufficient pool of competitors. But Clay, 26, is leading a petition to add the division to the 2022 Beijing Games.

“We really need that class in the next Games,” she said. “If there’s a little girl without an upper limb who thinks she’s less than, or not capable of doing something, it’s about encouraging the next generation, making that future possibility.”

Contests run by World Para Snowboarding, the international governing body for the sport, include this category for women, and Clay is one of just a handful of American female athletes competing in the category on the international level. Numerous other nations, including China, have several female snowboarders in the upper limb class.

“It’s the largest class on the men’s side of the sport and it’s growing on the women’s side,” said Daniel Gale, executive director of Adaptive Action Sports, a Colorado-based organization that steers people with disabilities to action sports and helped get snowboarding into the 2014 Paralympics in Russia. “Had it not been for Covid interrupting our season last year, we would have had the opportunity for those women to show that the numbers are there.”

At end of 2020, Clay ranked ninth in the world in her category and was the top American, although she is new to the sport and only has a handful of competitions under her belt. She narrowly missed the podium, placing fourth, in her most recent World Cup event last year.

She is training for a handful of domestic snowboarding competitions, bowing out of international events this season because of concerns about traveling during the coronavirus pandemic. She trains at the gym six days a week, snowboards with Adaptive Action Sports at least three days a week and regularly meets with a sports psychologist and nutritionist. Thanks to signing on with Burton, she was able to quit two of the three jobs she had, working now at a local sandwich shop.

Clay has followed a circuitous route to the sport.

Growing up in San Diego, she found speed by whatever means possible — cycling, skateboarding, in line skating. She got her first motorcycle at age 7 and was racing motocross as she neared her teens. It was an era when women’s motocross was at its peak, and she was racing around the nation, finishing in the top three among girls and boys in her class.

Then, at age 12, competing on a rainy day in Texas, she crashed when her bike slid out over a jump. Another racer’s front wheel landed on her neck. Clay awoke on a stretcher to discover she had no use of her right, dominant arm.

She had suffered a neck injury called brachial plexus. A few weeks later, Clay and her father were hit by a drunken driver and their truck flipped. Any hope to recover some use of her arm vanished, even after a 14-hour nerve graph procedure.

She learned to write with her left hand, play video games with her feet and how to make a ponytail with the help of a doorknob. She spent all of junior high and high school trying every type of sport and activity — track, art, choir, cheerleading — straining to redefine herself and to envision a future other than the one she had pictured as a professional motocross racer. Nothing made her heart sing.

It wasn’t until college at Dallas Baptist University that Clay got back on a motorcycle.

“I found myself constantly going back to the dirt track,” she said. “One of my friends said, ‘Why don’t we rig up a pit bike that you can ride with one hand?’ That bike didn’t stop for eight or nine hours. I went through three cans of gas. I still had that feeling on the track, this crazy sense of peace. I call it my throttle therapy. If I hadn’t gotten back on the bike, I wouldn’t have gotten into snowboarding.”

Adaptive Action Sports invited Clay to Colorado to try snowboarding. It was the first time she had been on a board since she was a small child.

“The day I met Kiana, having known her background and seeing videos riding her bike, I thought she had the exact right attitude to be a competitive snowboarder,” Gale, of Adaptive Action Sports, said. “As we’ve traveled down this road, she’s fallen more and more in love with the sport. She’s finding her place in the snowboard culture, finding her footing as an athlete and learning a lot about herself and what she’s capable of.”

Clay has been working with Burton’s designers on improving gear for those with physical disabilities.

Using her input, designers have created custom boots that Clay can tighten without a drawstring and jackets with diagonal zippers that can be easily managed with one hand and featuring a single left sleeve, since Clay rides with her right arm strapped tightly to her body under the jacket.

Unless her arm is pinned down, it “would flap around like a flag,” Clay said, hindering her balance while riding and racing. The inactive arm presents other dangers, too. After a recent dirt bike crash in which she went over the handlebars, Clay noticed her right hand turning black and blue a couple days later. When she went to the doctor, she discovered her wrist was broken.

She is hoping to have the arm amputated below the elbow this year.

“Getting that extra weight off, I see a lot of benefits and huge advancement potential as an athlete,” she said.

Clay said she hopes others, disabled or not, find her effort in the sport inspiring.

“The mark I’d like to leave is not only for disabled people, but for every human to understand that the only limitation they have is themselves,” she said. “I want to help people see beyond themselves, what their potential is and what they’re capable of if they’re willing to put in the work.”