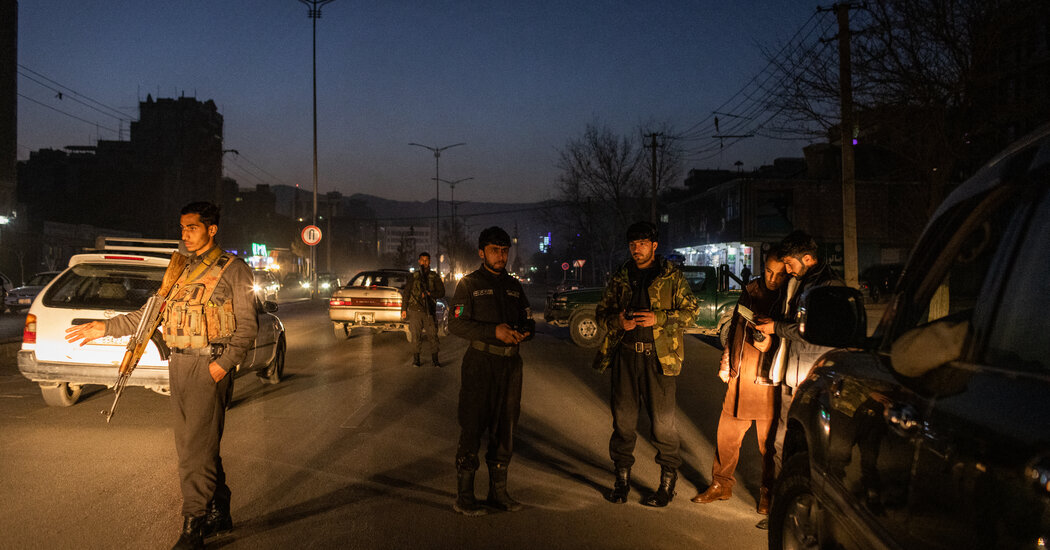 KABUL, Afghanistan — Both the Afghan government and its Taliban foes appear to be gearing up for a violent spring amid uncertainty over whether the Biden administration will meet a May 1 deadline for the withdrawal of all American troops from Afghanistan.

On Thursday, the Pentagon raised questions about whether the pullout — agreed to in a February 2020 U.S.-Taliban peace deal — would go ahead on schedule as the Biden administration reviews the agreement made by its predecessor. That statement followed bellicose remarks by Taliban and Afghan government officials, amplified by waves of violence across the country.

“Without them meeting their commitments to renounce terrorism and to stop the violent attacks against the Afghan National Security Forces, it’s very hard to see a specific way forward for the negotiated settlement,” John F. Kirby, the Pentagon spokesman, said at a news briefing. “But we’re still committed to that.”

But the talks excluded the Afghan government and left it feeling sidelined and unheard, according to Afghan officials. Under former President Donald J. Trump, they said U.S. diplomats frequently ignored concerns from Kabul in an attempt to expedite the negotiations.

There are currently 2,500 U.S. troops in Afghanistan, down from 12,000 this time last year. And while the Afghan government favors the withdrawal of Western forces, it wants a slower timetable than the one agreed to with the Taliban.

Now, it faces the prospect that the uncertainty around meeting the troop withdrawal deadline could fuel even more violence.

With the peace talks between the Afghan government and the Taliban in Doha, Qatar, at a standstill, Washington’s review will examine the Taliban’s commitments to severing ties with terrorist groups and reducing violence as agreed.

U.S. officials have long insisted that the agreement was “conditions based,” and that if the Taliban does not meet those terms it would extend the presence of U.S. forces in the country.

The Taliban, gearing up for the spring fighting season, is already well positioned around several Afghan cities after making steady gains across the country in recent years.

But recent overtures from the Biden White House have sent a more reassuring message to President Ashraf Ghani of Afghanistan and other government officials, raising their hopes that they will no longer be sidelined and that the Americans will not leave any time soon.

Hamdullah Mohib, Afghanistan’s national security adviser, unleashed a harsh diatribe against the Taliban last week while speaking to a group of Afghan commandos at an air base outside Kabul, the capital.

“They have proved that they don’t have any desire for peace and that they are a terrorist group,” said Mr. Mohib, who has a long history of spouting such sharp rhetoric. His latest remarks came on the heels of a phone call with his new U.S. counterpart, Jake Sullivan.

Afghan officials have said privately that Mr. Sullivan’s hourlong call restored a certain level of trust between the Ghani administration and the White House and made them confident that their voices will be heard as the peace talks in Doha continue.

On Thursday, the new secretary of state, Antony J. Blinken, talked with Mr. Ghani and expressed “the U.S. desire for all Afghan leaders to support this historic opportunity for peace while preserving the progress made over the last 20 years.”

Assurances from the White House that the Ghani administration will have ample lines of communication to Mr. Biden’s cabinet seem to have also assuaged the Afghan government’s concerns over the U.S. decision to retain Zalmay Khalilzad, the diplomat who spearheaded the U.S.-Taliban negotiations that excluded the Afghan government.

Mr. Khalilzad will be reporting to a “very organized” decision-making process, Mr. Ghani said during a virtual appearance at the Aspen Security Forum, adding that he expects a “predictable relationship” with the Biden administration.

Some Afghan officials distrust Mr. Khalilzad and were hostile to his dialogue with the Taliban under the Trump administration, particularly his pressure on them to release the roughly 5,000 Taliban prisoners with hopes that a reduction in violence would follow.

It didn’t. But it did open the way for talks between the Afghan government and the Taliban that began in Doha in September.

Asfandyar Mir, a postdoctoral fellow at Stanford University, said that an additional complication for the Biden administration is that the Afghan government is a “house divided” with rivalries throughout.

Many Afghan officials say they believe that the Taliban have only a single interest: to seize power by force. And all sides in the conflict agree that missing the May troop withdrawal deadline would quickly change whatever equilibrium has been established on the country’s battlefields and could risk setting off a concerted Taliban effort to enter cities.

In the meantime, regional powers, especially Iran and Pakistan, are biding their time and waiting to see what comes next under Mr. Biden.

Iran, for instance, hosted Mullah Abdul Ghani Baradar, the Taliban’s deputy leader, in Tehran on Wednesday, which could be perceived as demonstrating the country’s willingness to play a more active role in the talks.

Iran’s involvement in the Afghan war has shifted since 2001, underscoring the changing geopolitical currents over the war’s duration. On one hand, Tehran’s official line has denounced the return of the Taliban as a direct threat to Iran. But on the other, Iranian operatives have made quiet overtures to the insurgent group, offering weapons and other equipment, in Afghanistan’s southwest, Afghan officials say.

The Taliban does not “trust the United States and we will fight any group that is a mercenary for the United States,” Mr. Baradar was quoted as saying in the Iranian news media in an apparent reference to the Afghan government.

But just a month earlier, Iran’s foreign minister, Mohammad Javad Zarif, all but offered up an Iran-trained Afghan Shiite militia to serve the Kabul government in “the fight against terrorism.” He was speaking in an interview with an Afghan news outlet.

Officials here took that as a clear signal from its powerful neighbor that it intends to get further involved in the Afghan conflict.

Earlier this week, a Taliban delegation met with officials in Moscow, and on Friday, Abbas Stanekzai, a Taliban negotiator, told reporters that the Ghani’s administration is not “honest about peace.”

Abdullah Abdullah, the chairman of the Afghan government council leading the peace negotiations, sounded a pessimistic note in an interview with The New York Times on Thursday.

“The Taliban have taken a sort of maximalist position,” Mr. Abdullah said. “Before the negotiations, we were led to believe there would be a significant reduction in violence,” he added.

“The recent attitude of the Taliban has not been encouraging,” Mr. Abdullah said, noting that the group had yet to make a promised break with Al Qaeda, the terror group responsible for the Sept. 11 attacks and the main reason U.S. forces invaded the country in 2001.

A report from the U.S. Treasury Department earlier this month indicated that Al Qaeda had only gained strength in Afghanistan and continued its ties with the Taliban throughout 2020.

Despite waves of targeted killings across the country — striking fear in some of Afghanistan’s most populated cities, including Kabul — the Afghan Independent Human Rights commission found that the number of civilian deaths had decreased by more than 20 percent compared with 2019.

The report also found that 8,500 civilians had been killed and wounded in Afghanistan in 2020.