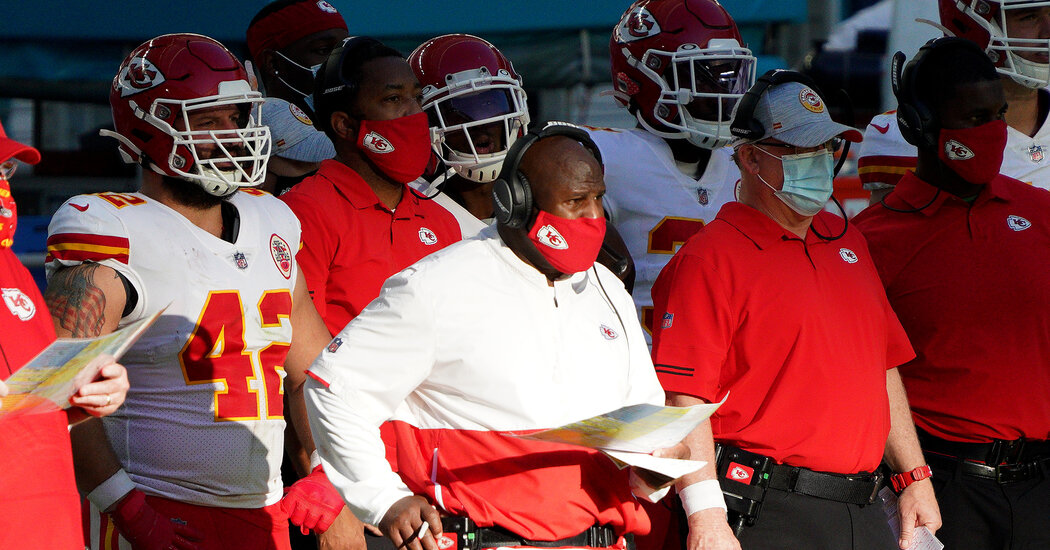 The N.F.L. can’t hide its Eric Bieniemy problem with poetry.

The league announced last week that Amanda Gorman, America’s first youth poet laureate, whose soaring verse on a nation rived by race and conflict enthralled viewers of President Biden’s inauguration, would deliver a pregame poem at the Super Bowl on Sunday.

On the one hand, that’s terrific news. Gorman’s way with words is a tonic we need right now.

On the other hand, beware. Pro football’s embrace of a young Black woman like Gorman — coming on the heels of its sudden, forced support of Black Lives Matter after the killing of George Floyd — is part of a public-relations campaign that obscures troubling reality.

The N.F.L. now sells itself as a champion for equality. But where change is needed most, it remains stuck in the stinging days of old.

Black players make up about 70 percent of N.F.L. rosters, meaning they provide the bulk of the entertainment. Yet whites hold the power, and won’t let go. No Black team ownership. A sprinkle of Black faces in upper management. It took until 1989 for the N.F.L. to hire a Black coach for the first time in the league’s modern era. Not much has changed: Now there are three.

The story, or, rather, the shameful passing over of Bieniemy, the offensive coordinator who helped power the Kansas City Chiefs to consecutive Super Bowls, puts a fine point on it. He is the best known, and most talked about, head coaching candidate in a small cluster of African-American coordinators in the N.F.L. But he continues to watch from the sideline as his white peers are chosen to lead teams.

In the latest round of head coach hiring, there were seven openings. Seven opportunities for the N.F.L. to stand behind the slogans like “End Racism” that now line its fields and adorn its helmets. Seven chances, and Bieniemy was shut out again.

What more can he do? His squad marched through the N.F.L. playoffs as if its opponents were stick figures. One more win, and he’s got back-to-back Super Bowl rings.

The star quarterback Patrick Mahomes talks up Bieniemy every chance he gets. Andy Reid, the Chiefs’ head coach, says he’s a rare and gifted leader. Given Reid’s stature in the N.F.L., that’s like a blessing from God.

Yet Reid continues to be dumbstruck at how his second in command keeps being overlooked. “I’m glad I have him, but I’m not so glad I have him,” Reid said last week. “I was really hoping he would have an opportunity to take one of these jobs. He would be great for any number of teams.”

So why can’t Bieniemy get a fair shake?

Naysayers claim he doesn’t call plays. But Reid and Mahomes say that’s not true. And when has not calling plays been an obstacle for white assistants hired to steer teams?

Another chorus claims Bieniemy doesn’t interview or communicate well. But that belies his calm, sure manner while addressing reporters. Besides, plenty of white coaches seem incapable of expressing themselves clearly.

Some say Bieniemy has not been hired because of brushes with the law that took place decades ago — including a fight in college after he was called a racial slur and an arrest on a drunken-driving charge in 2001. But this ventures into double standards for a league notorious for overlooking violent misdeeds off field with its players and blemishes with its white coaches.

Does Bieniemy, 51, a former player in his 15th year as an N.F.L. assistant, somehow need more experience? Then how do we explain a league currently in love with a new prototype: the young white coach trumpeted for his genius despite little on his résumé. Consider the Los Angeles Chargers’ new coach, 38-year-old Brandon Staley. In 2016, he was an assistant coach at Division III’s John Carroll University. Now he holds the reins of an N.F.L. team.

So much for experience when you look like an N.F.L. owner’s grandson.

For a long while, during this same-as-it-ever-was hiring cycle, it looked as if it would be a complete shutout for Black coaches. Then, with one last job available, the Houston Texans hired the Baltimore assistant David Culley.

Culley is 65. You read that right: retirement age, and he’s only now getting his first lead job in the league. He has been coaching for roughly 40 years. Is that really what it takes? Four decades of toil?

It’s important to understand how discrimination alters pathways for N.F.L. assistants. But there’s another, less talked about worry: the stifling effect on the ambition of Black coaches all the way down the pipeline.

Charles Adams is just one example.

A few months back, I wrote about Adams and his journey as an African-American police officer and head coach at Minneapolis North high school. He inherited a struggling team from the toughest part of his city, turned it into a perennial power and won a state title. When you watch the Super Bowl and see the Tampa Bay Buccaneers rookie Tyler Johnson catching passes from Tom Brady, know that it was Adams who guided the young receiver through high school and still mentors him today.

When we spoke recently, Adams told me how he used to imagine latching on with a college team and working up the ladder from there. Maybe the pros. Maybe head coach. Why not? For years, he applied for an N.F.L. fellowship that sends Black coaches to training camps so they can network and soak up knowledge. He never got a response.

That’s a stinging blow. Seeing Bieniemy being constantly overlooked is another. Together the message is awful. Don’t think too big.

“For many of us, it becomes ‘Why bother?’” Adams said.

It will be great to see Amanda Gorman recite poetry at the Super Bowl. But when you do, think of Bieniemy and all the coaches who look like him. Think of their hopes and frustrations — of their dreams deferred, again and again.