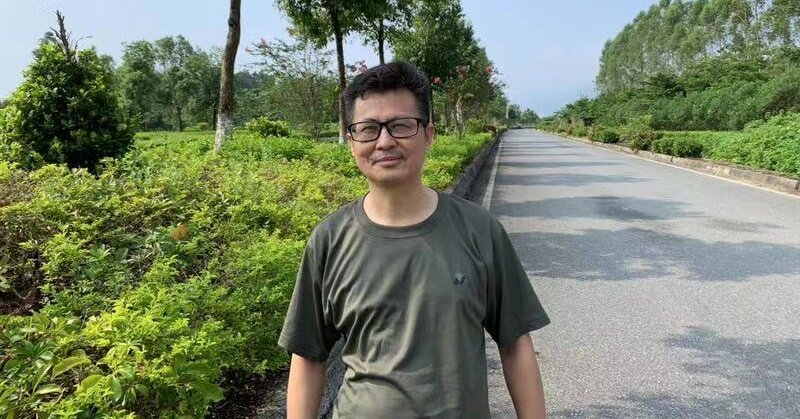 After learning that his wife had cancer, Yang Maodong, a prominent democracy activist in China, rushed to get a visa and air ticket to join her in the United States.

But Mr. Yang never landed there.

Border inspection officers at Pudong International Airport in Shanghai stopped him from joining a flight to San Francisco last week, his elder sister and friends said. “I must immediately get to the United States and pour all my energies into caring for her,” Mr. Yang had written in an open letter to Chinese leaders a day before his planned flight. He wrote that his wife “has given everything for me, and today it’s my turn to give everything for her.”

But after Mr. Yang sent out messages from the airport about his predicament, he disappeared, his sister and friends said. Calls to his phone over recent days have not been answered.

“He had hoped to strike a blow for the right of citizens to travel abroad normally,” Yang Zili, a friend and fellow activist who moved from China to the United States in 2018, said in a telephone interview. “We’ve been waiting for word but there’s been nothing since he disappeared at the airport.”

Mr. Yang ’s pleas to reunite with his wife and his apparent detention have ignited calls for his release from supporters in China and abroad. His case may become an early sign of how Beijing and the Biden administration handle contentious human rights issues.

The State Department said on Friday that it was disturbed about Mr. Yang’s disappearance, Voice of America reported. A spokesman for the United States Embassy in Beijing said by email on Tuesday that he could not confirm that Mr. Yang had received a visa because such records are confidential, and did not have immediate comment on the case.

Mr. Yang’s sister, Yang Maoping, said Chinese officials had initially indicated that they would let him travel to the United States. His wife, Zhang Qing, lives there and recently had an operation for colon cancer, and is about to start months of chemotherapy, Ms. Yang said.

“Now is a critical moment for his wife,” Ms. Yang said. “We hope that this is a temporary problem.”

Mr. Yang, 54, had long been one of China’s most obdurately determined democracy activists, and had spent more than a decade in detention and prison.

Best known by his pen name, Guo Feixiong, he took part in the pro-democracy protests of 1989, and made a living as a small-time publisher and novelist before pouring his energies into grass-roots campaigns and debating China’s political future.

Mr. Yang is among the Chinese dissidents who preferred passionate gestures and rallies over low-key methods such as litigation and online petitions. He made a name as a combative activist when organizing villagers near Guangzhou in southern China in 2005 to protest land seizures that they said were corrupt.

He was sentenced to prison in 2007 after being convicted on charges of illegal business activities related to his publishing. After his release in 2011, he plunged back into activism, and in 2013 joined protests at the Southern Weekend newspaper in Guangzhou, where journalists had denounced tightening censorship.

In 2015, Mr. Yang was sentenced to six years in prison on charges of disturbing public order and “picking quarrels and provoking trouble” — a vague accusation often leveled at dissidents — for his role in the newspaper protest as well as for supporting a public campaign for China to ratify an international rights covenant.

As Xi Jinping, the Chinese Communist Party leader, has tightened censorship and punishment for dissent, many activists have stepped back from confrontation or given up campaigning.

Mr. Yang has said he rethought his tactics, but never retreated from opposition to one-party rule or from his belief that China would ultimately embrace constitutional democracy. He said he had refused opportunities to move to the United States, where his wife and two children settled in 2009 after leaving China.

“He said that a believer in freedom must also be a patriot,” Chen Min, a former editor in southern China who knows Mr. Yang, said by telephone. “He was dead set against leaving this land, but he did not imagine that his wife would get cancer.”

Nor did Mr. Yang retreat from his belief that public exposure could sometimes press the Chinese authorities into concessions. Last week, he repeatedly put out statements through his friends about wanting to join his wife in the United States — right up to when friends and journalists lost contact.

In a brief interview last week, Mr. Yang said that security officers in Guangzhou had initially told him that they were sympathetic to his plans to go to United States.

The security officers later told him they wanted Mr. Yang to travel to his home province, Hubei in central China, to discuss conditions for going abroad. He was wary of doing so. The Chinese police often demand that dissenters must stay silent if they are allowed to leave the country.

Instead, Mr. Yang flew from Guangzhou to Shanghai on Thursday, hoping to take a flight to San Francisco that night.

But airport officials told him he would not be allowed to board the plane because he was deemed a “national security risk,” Mr. Yang said in a series of messages. He said he would go on hunger strike in protest.