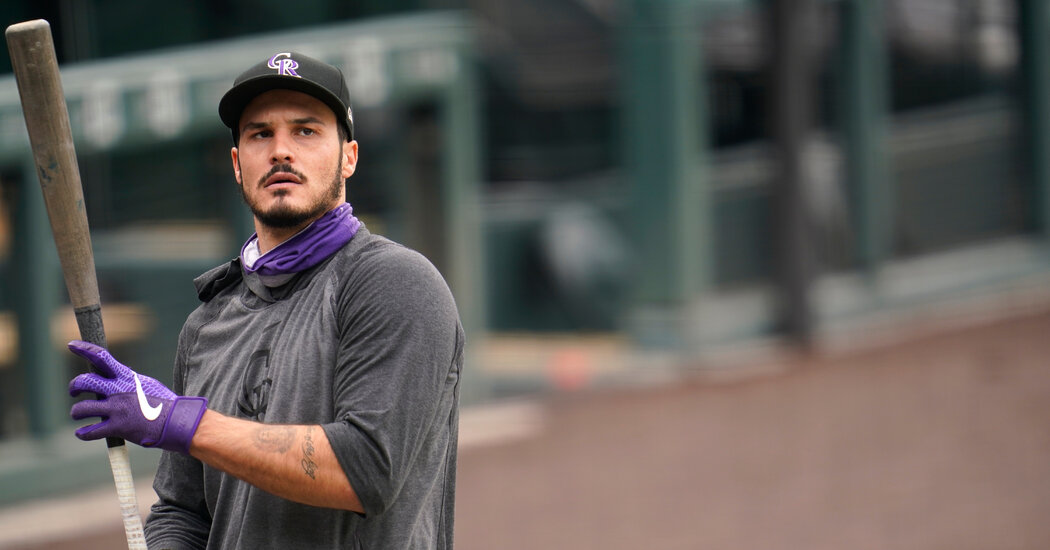 The Cardinals event was buoyant and celebratory as the team was welcoming Nolan Arenado, the elite third baseman they had just acquired in a trade with Colorado.

But in a more subdued video chat from Denver, Rockies owner Dick Monfort and General Manager Jeff Bridich were on their heels as they answered pointed questions from the news media while trying to explain why they unloaded their best player for five midlevel prospects — and sent along an estimated $50 million to St. Louis, to boot.

“We are going to face some issues with our fans, and we’ll deal with it,” Monfort said. He added, “Hopefully they will understand in time.”

But fans may never comprehend how the Rockies could send the team’s best player — and quite a bit of money — to the Cardinals for a handful of unproven talent.

On the surface, the trade appeared like a classic salary dump. There is always a team regretting a huge contract and another one willing to take advantage of that change of heart. It is how the Yankees acquired Giancarlo Stanton, and Alex Rodriguez before him.

But Arenado’s case is unusual, in part because he asked for the trade last spring, a little over a year after he had agreed to an eight-year, $260 million contract extension with Colorado. But the Rockies’ on-field fortunes had plummeted since the extension was signed, and Arenado’s commitment to the club wavered. Along the way, his relationship with Bridich soured.

“The relationship wasn’t always peaches and cream,” Bridich said. “There were bumps here and there. But relationships change over time. Could I have done a better job in certain areas? You betcha. Absolutely.”

Arenado, on the other hand, was beaming on Tuesday, saying he was ecstatic to be a Cardinal and that he harbored no ill-will toward the Rockies. He portrayed the trade as standard operating procedure for a team that has endured two losing seasons and was seeking payroll relief.

“The last few years have been tough,” he said. “I know a lot of people are probably bothered by this, but I’m not the first contract to get moved after couple of years. It happens a lot in this game.”

The trade caused an uproar in Colorado, where Arenado is extremely popular, and for good reason. A five-time All Star with eight Gold Glove awards, he’d hit at least 37 home runs in each of the five full seasons before the shortened 2020 season. For as good as he is at hitting, Arenado is even better with the glove, with many considering him the best defensive third basemen in the game.

Outraged Rockies fans have taken to Twitter and written letters to the Denver Post accusing the team of cynically slashing payroll to join the ranks of clubs like the Pittsburgh Pirates and Tampa Bay Rays at the bottom of the payroll ladder. They’ve also been accused of bungling the situation with Arenado, allowing the player’s testy relationship with Bridich to force the issue.

“If we are looking to pass blame, you can blame me,” Bridich said. “It’s the job of the G.M. to build a team that competes and wins as much as humanly possible. But I believe the word human is an important one.”

But Monfort added that the Rockies had little room to maneuver because Arenado requested a trade nine months ago. When Arenado was informed during his introductory news conference that Monfort had revealed the request to reporters, he did not dispute it. He said he was just grateful that Colorado had dealt him.

“My relationship with the Rockies is just fine,” he said. “I’m not going to talk about the bad things. There are no bad things. It was great. I had a great time in Colorado. I loved it there. I did the best I could there. It just didn’t work out.”

With the trade request hanging over them, Monfort said, the Rockies had little choice but to make a move. Arenado’s contract included an opt-out clause after the 2021 season, and the Rockies assumed that if Arenado wanted to be traded, he would take the opportunity to leave via the opt-out at season’s end.

Monfort outlined the two choices: They could keep Arenado for 2021, paying him $35 million and then collect a compensation draft pick if he opted out and signed with another team. Or they could trade him now, getting more players back.

In exchange for the face of their franchise, the Rockies received Austin Gomber, a left-handed pitcher; Tony Locey and Jake Sommers, both right-handers; third baseman Elehuris Montero and infielder Mateo Gil. Only Gomber has pitched in the major leagues.

“We feel relatively comfortable that four or five of those players would have been the type of guy that we might have gotten with that one pick,” Monfort said.

There might have been other options, too. Colorado could have waited and traded Arenado before the July 31 trade deadline, perhaps drawing interest from teams in the pennant race, thus driving up the price. Arenado’s opt-out also made it more challenging for the Rockies to get a top prospect in return, because he might have become a free agent after only one season. Or, in a riskier movie, they could have added players in hopes of making it more appealing for Arenado to stay.

At the time Arenado signed the deal, Colorado was coming off two straight postseason appearances. Monfort traced the decline of the team to when the Rockies allowed the Yankees to sign D.J. LeMahieu away from them after the 2018 season.

The owner expressed regret over that decision but said he had not entertained the idea of firing Bridich. Someone else? Perhaps.