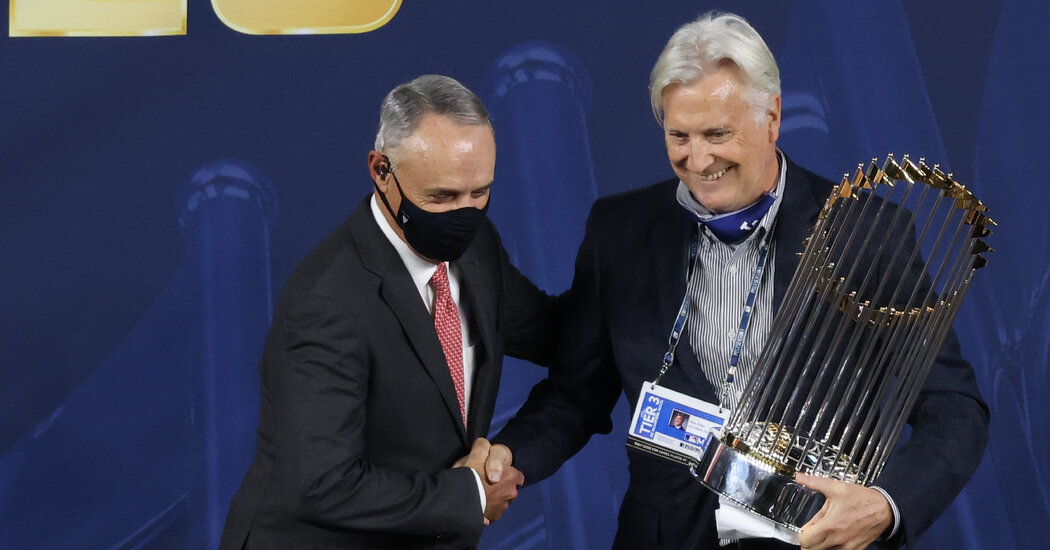 The 2020 Major League Baseball season began on July 23, a day in which there were just over 70,000 new coronavirus cases reported in the United States. On Friday, when M.L.B. presented a proposal to the players’ union to push back the start of the 2021 season by roughly a month — and shave eight games off each team’s schedule — more than 165,000 new cases were reported.

Now, amid deep uncertainty about how and when the pandemic might be contained, the league and players are considering their 2021 season — one that without modification would begin on April 1 with a full 162-game schedule and normal travel plans.

There are serious concerns about organizing the next season. Staging last year’s shortened, 60-game regular season proved daunting: It included two early virus outbreaks that threatened to derail the plan, a tightening of the health and safety protocols and the creation of bubblelike conditions that allowed the postseason to go off without a hitch — until the final day.

Now M.L.B., its team owners and some government officials in Arizona — where several spring training camps are based — have expressed concern about moving forward amid the current infection rates and the halting rollout of vaccinations.

All of this comes against a backdrop of disputed economics and fragile labor relations in the game.

The league and players — whose collective bargaining agreement expires on Dec. 1 — are increasingly mistrustful of each other, particularly after bitter monthslong negotiations last year led M.L.B. Commissioner Rob Manfred to impose a shortening of the season when an agreement couldn’t be reached.

As a result of Manfred’s decree, players were paid at a prorated rate, only 37 percent of their 2020 salaries. But M.L.B. also claims to have lost money: Manfred has said M.L.B.’s 30 clubs took on more debt and sustained about $3 billion in operating losses last year. Fans were not allowed into stadiums until the neutral-site National League Championship Series and World Series were held in Texas. The players’ union, which has long questioned some teams’ commitment to spending and winning, has challenged some of M.L.B.’s financial claims.

So when M.L.B. recently proposed subtracting a few games, compressing the schedule, installing a universal designated hitter, expanding the playoffs to 14 teams from 10, and pushing the World Series into early November, players were once again skeptical.

The wheels for the season, though, are already in motion. Spring training is expected to start in two weeks. Pitchers have begun ramping up for the season. Some players are already at their spring training sites in Arizona and Florida, and clubs have been told by M.L.B. to proceed as originally scheduled, although several final details — like health and safety protocols — haven’t been finalized.

“That’s certainly created a little bit more of a challenge than you would normally have,” Yankees Manager Aaron Boone said on a video conference Friday. “Obviously the number of players, what protocols are or not going to be in place, how does that affect things, getting guys into camp and what are the quarantine rules — those are all things that we’re working through and being finalized. But I also feel like we’re very much in a position to be ready to roll right now. As late as yesterday, we’re told we’re on time still.”

That may indeed be the case if the union rejects M.L.B.’s offer and no more negotiations occur. An answer to the owners’ proposal was expected at some point on Monday.

M.L.B. cannot unilaterally decide to delay spring training or the season, hence the need to negotiate with players.

Owners would also like to open games to fans, whose spending at stadiums, according to the league, makes up nearly 40 percent of its revenue.

M.L.B. players, for their part, believe staging a season during a pandemic is possible, especially after going nearly two months late last season without a known case. The N.F.L.’s ability to complete every scheduled game this season — albeit with some complications due to positive tests — is a sign that operations do not have to halt even amid outbreaks, as is the progression of the N.B.A. season despite the need to postpone numerous games for precautionary reasons.

M.L.B.’s proposal called for players to receive their full 162-game pay if they play all 154 games, said people familiar with the negotiations who weren’t authorized to speak publicly because no announcements had been made.

The offer also called for Manfred to gain expanded rights to cancel or suspend games based on certain conditions, such as government or travel restrictions, and if he, after consulting with medical experts and the union, believes that staging games would pose an “unreasonable” health and safety risk.

Players have indicated concern that this could lead to fewer than 154 games, and that a compressed schedule with fewer days off could complicate making up contests postponed because of virus cases. But last year, even with similar powers given to him by a March agreement between the sides, Manfred didn’t suspend the season, despite outbreaks on the St. Louis Cardinals and the Miami Marlins. All but two teams played 60 games, using seven-inning doubleheaders to squeeze in some of them — a new practice that was generally well received.

The union, which had already rejected expanding the playoffs, believed it deserved more than the playoff money pool that M.L.B. offered on Friday. It also feared that allowing more teams into the postseason would cheapen the regular season, de-emphasizing winning. Rosters, though, are mostly set, and the majority of top free-agent players have already signed with teams.

Last year, M.L.B. pushed to have the lucrative postseason wrapped up by the end of October to avoid another wave of coronavirus infections and a cluttered television sports schedule in November. Pushing back the 2021 playoffs, even a week into early November, would need approval from the networks that pay M.L.B. for the right to broadcast its games.

A deal could still be reached. Even though team owners and players never reached agreement on a schedule for the 2020 season, they agreed on opening day to a 16-team expanded postseason, which allowed them to tap into more broadcast revenue. In order to do that again, though, the sides would need to find increasingly fleeting common ground.