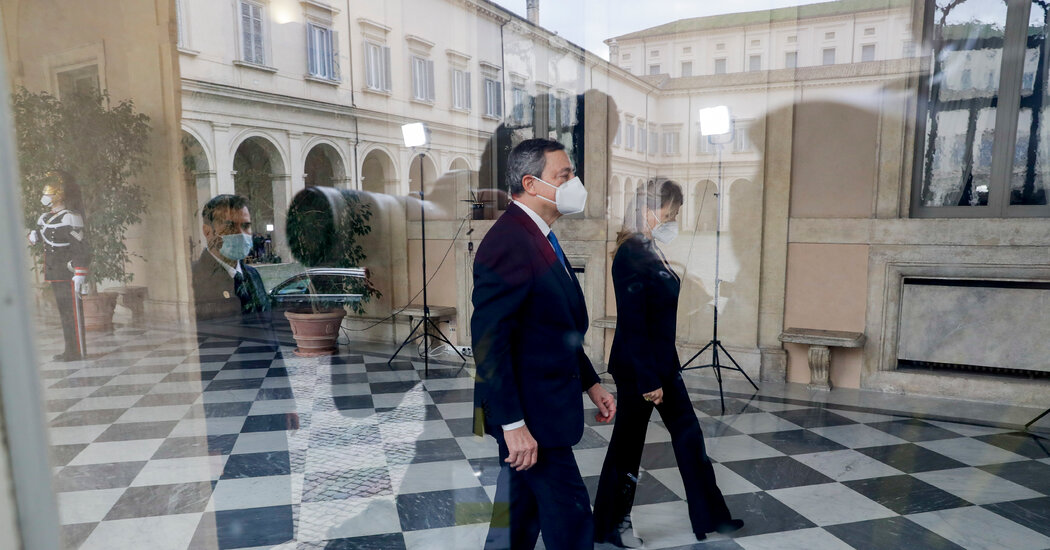 ROME — Mario Draghi, the former head of the European Central Bank who is largely credited with helping to save the euro, accepted a mandate from Italy’s president on Wednesday to try and form a new unity government that would guide the country out of the pandemic and through economic recovery.

“To overcome the pandemic, to complete the vaccine campaign, to offer answers to the daily problems of the citizens, to relaunch the country are the challenges we face,” Mr. Draghi said after meeting with President Sergio Mattarella for more than an hour at the Quirinal Palace.

Italy, he said, faced a “difficult moment.” And he said he had accepted Mr. Mattarella’s appeal because the emergency “requires an answer equal to the seriousness of the situation.”

Until as recently as Tuesday, the idea of Mr. Draghi replacing Giuseppe Conte as prime minister remained a pipe dream for the many Italians frustrated with a governing coalition that seemed paralyzed by ideological schisms and incompetence, especially as the coronavirus pandemic raged and economic devastation set in.

But on Tuesday evening, Mr. Mattarella summoned Mr. Draghi and appealed to “all the political forces in the Parliament” to support a “high profile government” to meet the historic moment.

He made it clear Mr. Conte’s tenure was over and the new players, potentially political leaders proposed by the parties supporting Mr. Draghi or an all-star cast of politically unaffiliated economists, judges and scientists, was ready to take the stage.

Italy’s stock market rallied on Wednesday in response to the news that Mr. Draghi had been lined up to lead the Italian government. He immediately began consultations with party leaders that will continue in the coming days in an effort to form a new Italian government.

“I am confident that from the exchange with the parties and the groups in the Parliament and from the dialogue with the social forces,” Mr. Draghi said on Wednesday, “there will emerge unity and the capacity to give a responsible answer to the president’s appeal.”

Mr. Draghi is himself no political novice. He has served in past Italian governments, was a director of Italy’s treasury and knows well the machinery of government at both the European and Italian level.

His name has been mentioned for years as a potential candidate to replace Mr. Mattarella as Italy’s head of state in 2022. But now Mr. Mattarella himself has called on Mr. Draghi, whom he has publicly praised in the past, and brought him directly into the fray.

“Now everyone of good will must heed the call of President Mattarella and support the government of Mario Draghi,” Matteo Renzi, the wily former prime minister who engineered the collapse of Mr. Conte’s government by pulling his small party’s support in Parliament. “Now is the time for sobriety.”

Party leaders on the right and left quickly expressed support for Mr. Draghi after it became clear that Mr. Mattarella would ask him to form a government.

Among them were leaders who had made great shows of their loyalty to Mr. Conte. Nicola Zingaretti, the leader of the Democratic Party that Mr. Renzi once led, released a statement that on the one hand referred to the government crisis as a “disaster provoked by the irresponsible choice” of Mr. Renzi, but he then welcomed Mr. Mattarella’s decision. “We will stand ready to discuss the common good for the country.”

A government led by Mr. Draghi could emerge in two different ways. If he succeeds in finding broad parliamentary support, he could govern from a position of strength until the next scheduled elections in 2023.

If he fails to find sufficient political support, Mr. Mattarella could nevertheless make him the head of a transitional government with limited scope — probably focused on the vaccine rollout and managing more than 200 billion euros, or about $240 billion, in relief funds from Europe — before leading the country to early elections.

“We have available the extraordinary resources of the European Union,” Mr. Draghi said on Wednesday in a clear pro-European sign. “We have the chance to do a lot for our country with a careful eye to the future for young generations and to strengthen social unity.”

Mr. Mattarella explicitly said Tuesday evening that he had no interest in new elections. Neither does Mr. Renzi, who is polling at about 2 percent, or the Five Star Movement, which has the largest bloc in Parliament but would likely be decimated in elections by its nationalist opponents.

Leaders of Five Star initially expressed their opposition to Mr. Draghi, but on Wednesday, it became increasingly clear that that was far from a unified position within the party, which appeared to be breaking apart.

Even the political forces that had been clamoring for new elections had suddenly quieted down with the arrival of Mr. Draghi.

“We are a responsible party and we will not say no out of hand,” said Riccardo Molinari, a member of Parliament from the nationalist League party led by Matteo Salvini, who polls suggested would benefit most from early elections.

But Mr. Salvini also needs to protect his right flank. If he is seen as too amenable to Mr. Draghi, who is the personification of the European Union that Mr. Salvini has railed against for years, other right-wing politicians are eager to take his place.

“I don’t think that the solution to the nation’s serious health, economic and social problems is yet another government born in the palace,” Giorgia Meloni, the leader of the post-fascist Brothers of Italy party, wrote on Twitter. “We instead think that it is definitely better to give Italians the possibility to vote.”

In one fell swoop, Mr. Mattarella’s move to bring in Mr. Draghi has the potential to reset Italian politics, which many commentators lamented was not up to the task of governing in a national emergency.

“To think that the most anti-European parliament in the history of Italy could crown Draghi as prime minister today and head of state tomorrow gives a sense of the miracle Sergio Mattarella pulled off in these years,” Claudio Cerasa, the editor of Il Foglio newspaper, wrote on Wednesday.