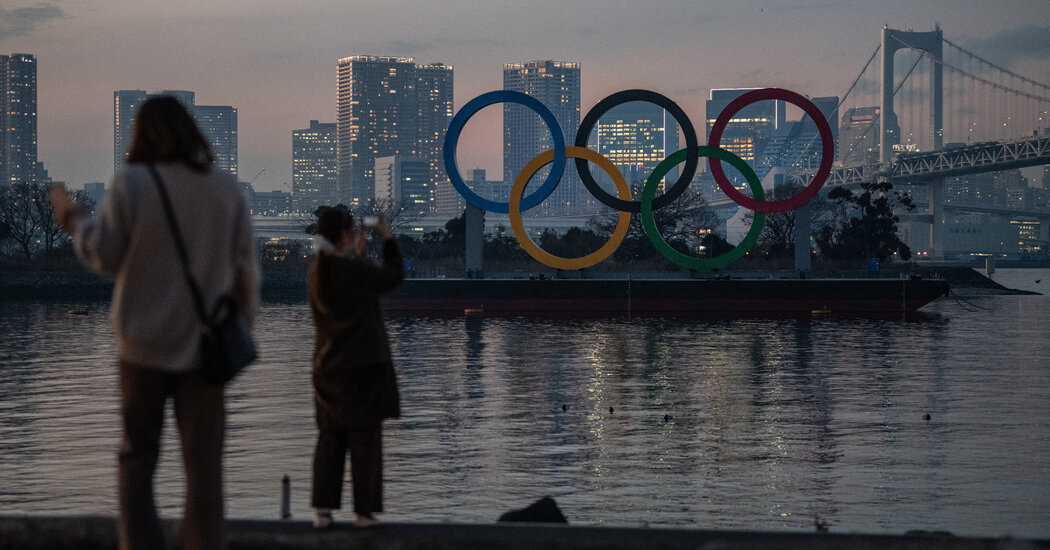 TOKYO — Defying mounting concerns that this summer’s Tokyo Olympic Games will have to be canceled because of the coronavirus pandemic, organizers began unveiling guidelines on Wednesday for securing the safety of athletes and others traveling to Japan for the event.

After nearly two months of relative silence amid new waves of infection in Japan and many other countries, organizers released the first of several “playbooks” that will instruct athletes, game officials and members of the news media on the protocols they must follow. While athletes and other attendees will not be required to be vaccinated or to quarantine on arrival in Japan, they will be subject to severe restrictions on movement and socializing.

The organizers said the documents were preliminary and would be updated as the pandemic evolves. They have also not yet decided whether spectators will be permitted to travel to Tokyo for the Games, which have already been postponed by a year.

The challenges of managing an international event involving more than 10,000 athletes and thousands of coaches, team officials and journalists in the midst of a pandemic will be formidable. If the Games do go ahead as scheduled on July 23, they will be unlike any other in modern times.

Pierre Ducrey, director of Olympic Games operations for the International Olympic Committee, reiterated on Wednesday that vaccination would not be a prerequisite for athletes or anyone else traveling to Japan for the Summer Games. Japan will not begin its own vaccination campaign until the end of this month, and is unlikely to have its population fully vaccinated before the opening ceremony.

Instead, all athletes will be required to test negative for the coronavirus within 72 hours of their departure for Japan, and they will be tested again upon arrival. Assuming their results are still negative, they will then be allowed to participate in training and competition even during the 14-day period of self-isolation that Japan requires for all travelers arriving from abroad, according to documents released by organizers, the Japanese central government and the Tokyo metropolitan government.

Mr. Ducrey said he expected most athletes to stay in the Olympic Village during their time in Tokyo, and that they would be encouraged not to arrive more than five days before their competitions.

“The regulations are trying to promote the safest possible environment within the Village,” he said. “We feel like this is the best place for them to be when it comes to operating in safe conditions.”

Christophe Dubi, the I.O.C.’s executive director of the Olympic Games, said he expected most athletes and others to follow the rules, but declined to speculate on what punishments would be imposed on those who failed to comply.

“Those playbooks are designed to be followed,” he said, adding that the rules are simple. While organizers do not anticipate any breaches, he said, protocols will be established for dealing with them.

But organizers expect that some infections will be inevitable, and they said in briefing documents that they would set up special “fever clinics” and secure hospital space for those who get sick.

The exemption from quarantine would also apply to spectators, as it would be “impractical” to require them to isolate for 14 days, the documents said. But the decision on whether to allow spectators from abroad — Japan’s borders are currently closed to most nonresident foreigners — will not be made until the spring, organizers said.

“Spectators are nice to have, but they are not must-haves,” Dick Pound of Canada, the longest-serving member of the I.O.C., said in a recent interview, though not having them would deprive organizers of some $800 million in ticket sales.

While Wednesday’s playbook was directed at international sports federations, rules for other entities, including athletes, officials, the news media and broadcasters, will be released in the coming days. They are expected to include many of the same requirements.

Though visitors will be exempted from quarantine, they will have to limit their movements for the first 14 days. Travel on public transportation will be prohibited. So will visits to bars, restaurants, health clubs or any other tourist locations. Visitors will have to file a list of everyone they have close contact with during that period.

The Japanese authorities will have the right to send anyone who tests positive for the coronavirus to a government-controlled isolation facility and will determine when they are released. Violations of the protocols may result in dismissal from the Games.

The document’s other suggestions for limiting the spread of the virus include expressing support for athletes only in the form of clapping, rather than singing or chanting. There will be temperature checks at all venues, and masks must be worn at all times indoors except while eating, drinking or sleeping.

Olympic officials see some reason for optimism. In many parts of the world, professional sporting events have been held for months, though often with sparse crowds or no spectators at all, and nothing as large as the Summer Games.

In Japan, soccer and baseball games have been staged with up to 5,000 spectators, giving Olympic organizers hope that they could manage the Summer Games using similar protocols.

“We learned a lot from the best practices of other events, and you will see that the playbooks reflect what we have seen in other sports,” Mr. Dubi said.

Some of the stiffest opposition to holding the Games comes from the Japanese public itself. In a survey conducted in January, the Japanese broadcaster NHK found that nearly 80 percent of respondents believed the Games should be postponed again or canceled entirely, a figure that has grown in recent months. The Olympics have not been canceled since World War II, but Thomas Bach, the president of the I.O.C., has said another postponement is not possible.

Cancellation would come at a huge cost for Japan, which has spent more than $12 billion preparing for the Olympics. The I.O.C., international sports federations and national Olympic committees also stand to lose billions in media and sponsorship revenue if they are canceled. Other cities may shy away from bidding to host future Games once they see the risk of cancellation is real.

In their effort to keep the Games alive, Olympic officials have been consulting with Tennis Australia, the organizer of the Australian Open, which spent millions of dollars flying more than 1,200 athletes and other personnel into the country two weeks before the tournament so they could undergo some form of quarantine.

Crag Tiley, the chief executive of Tennis Australia, said the tournament’s protocols were not scalable to an event the size of the Olympic Games.

“I’ve had a lot of contact from the Olympics in Tokyo,” Mr. Tiley said during a teleconference with the news media in Australia ahead of the tennis events. “They asked me if I had any advice. I just said, ‘Good luck.’”